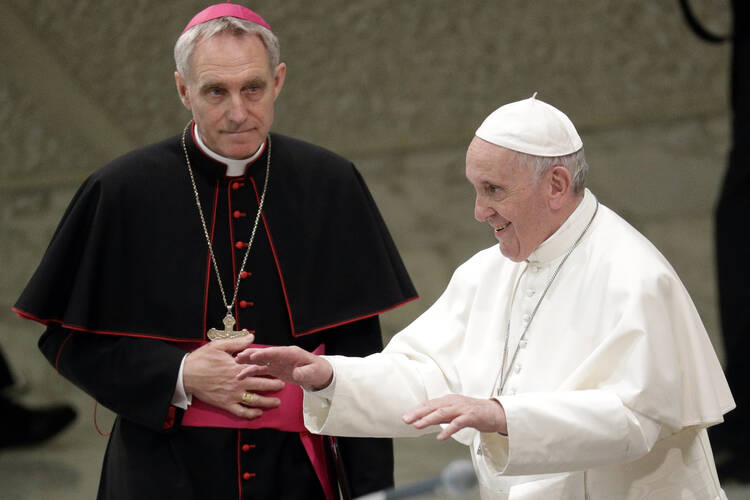 Prefect of the Papal Household Archbishop Georg Gänswein, left, looks at Pope Francis as he arrives for an audience with participants of a pilgrimage of the Italian-Albanian diocese of Lungro, in the Pope Paul VI hall, at the Vatican, Saturday, May 25, 2019. Pope Francis met on Monday, Jan. 9, 2023, with Archbishop Gänswein, the longtime secretary of Pope Benedict XVI who was a key figure in his recent funeral but who has raised eyebrows with an extraordinary memoir in which he settles old scores and reveals palace intrigue. (AP Photo/Andrew Medichini, File)

ROME (AP)—Pope Francis met on Monday with Archbishop Georg Gänswein, the longtime secretary of Pope Benedict XVI who was a key figure in his recent funeral but who has raised eyebrows with an extraordinary memoir in which he settles old scores with the reigning pontiff and reveals palace intrigue.

The Vatican provided no details about the content of the private audience, other than to say that it happened.

Speculation about Gänswein’s future has swirled now that his main job tending to Benedict has come to an end following Benedict’s Dec. 31 death. But questions have also been raised about what Francis will do with Gänswein following this week’s publication of his tell-all book, “Nothing But the Truth: My Life Beside Pope Benedict XVI.”

In the text, Gänswein reveals previously unknown details of some of the biggest hiccups and bad blood that accrued during the last 10 years in which Benedict lived as a retired pope alongside Francis following his 2013 decision to retire, the first pope in six centuries to do so.

Gänswein’s future remains uncertain, and his memoir is certainly going to complicate relations with the current pontificate.

In one of the most explosive sections, Gänswein says he was “shocked and speechless” when Francis essentially fired him from his day job as the head of the papal household in 2020 after a scandal over a book Benedict co-authored. Francis told Gänswein to stop coming back to the office and to dedicate himself to caring for Benedict, essentially ending his job as the “bridge” between the pontificates.

Printing previously secret letters between the two popes and relaying private conversations with both, Gänswein revealed that Francis even refused entreaties from Benedict to take him back on. Clearly embittered, Gänswein described Francis as insincere, illogical and sarcastic in deciding his fate, and said Benedict even made fun of Francis when told of the decision.

“It seems as if Pope Francis doesn’t trust me anymore and is making you my chaperone,” Gänswein quoted Benedict as saying.

Gänswein remained Benedict’s gatekeeper, confidant, protector and spokesman, and in the new book appears keen to settle old scores and set the record straight to defend Benedict and himself one more time.

Gänswein also wrote of his dismay that, years earlier, Francis had refused him the right to live in the palace apartment previously occupied by the prefect of the papal household. After a longer-than-usual refurbishment, Francis gave the flat instead to the Vatican foreign minister, forcing Gänswein to continue living in the monastery that Benedict called home.

Gänswein’s future remains uncertain, and his memoir is certainly going to complicate relations with the current pontificate. As an archbishop, he technically could be appointed to an archdiocese in his native Germany. Asked about that possibility, the head of the German bishops conference said last week after the funeral that it wasn’t up to him but Francis. In addition, some Vatican commentators have suggested Gänswein could be appointed as a Vatican ambassador, to run an important shrine or to resume his academic career.

Gänswein, a 66-year-old German canon lawyer, stood by Benedict’s side for nearly three decades, first as an official working for then-Cardinal Joseph Ratzinger in the Congregation for the Doctrine of the Faith, then starting in 2003 as Ratzinger’s personal secretary.

He followed him to the Apostolic Palace when Ratzinger was elected pope, and then into retirement when Benedict stepped down. In that capacity, he remained Benedict’s gatekeeper, confidant, protector and spokesman, and in the new book appears keen to settle old scores and set the record straight to defend Benedict and himself one more time.