Eulogy vs. homily: When should you talk about the deceased in a Catholic funeral? 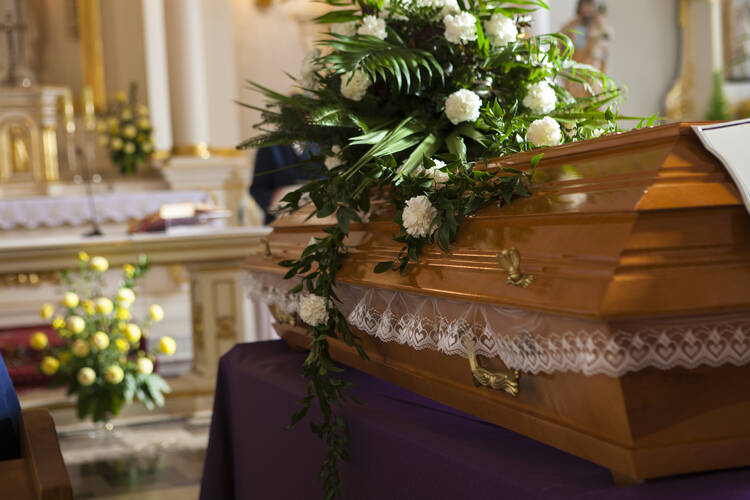 If you were to survey parish priests about the liturgical issues that most often cause them aggravation, I suspect eulogies would be high on the list. When someone dies, it is only right that family and friends be given a chance to share their memories of their loved one. But how many? And how long? A single eulogist can sometimes speak for 20 minutes.

Priests are often expected to deliver some kind of eulogy in their homily, as well, despite the fact that the General Instruction for the Roman Missal instructs the priest not to do so (and oftentimes they may not even know the deceased or their family). The balance between pastoral care and logistical realities can be a tough one to strike.

Elements of this challenge played out publicly at the recent funeral of Pope Emeritus Benedict XVI. During the Mass, Pope Francis offered a homily that was criticized by some as being too “generic” and others as “appalling” for not including more significant reflection on the life and legacy of Benedict.

When someone dies, it is only right that family and friends be given a chance to share their memories of their loved one. But how many? And how long?

A big part of the problem when it comes to planning for eulogies is that the funeral liturgy was not designed with them in mind. As H. Richard Rutherford, C.S.C., professor emeritus of liturgical theology at the University of Portland describes, the funeral services were originally designed as a set of three rituals, each of which had a different function in the journey of the deceased from death into eternal life. The vigil or wake came first, and it “was the time to focus on the dead person,” Father Rutherford explains. “In the classic tradition, it was the place where eulogies would happen.”

Then came the funeral Mass, which Father Rutherford says “is not so much what the dead person has done, but what God has done [in their lives] and is now doing, calling them to salvation.” The homily is not meant to remind us of the achievements of the dead, but of the loving welcome of God. Then the burial or committal emphasizes the afterlife.

“But who’s going to spend three days doing a funeral today?” Father Rutherford asks. “It just doesn’t happen. When people think of a funeral today, they think of the funeral Mass.”

As the role of the vigil as a place for sharing stories diminished, eulogies during the funeral Mass began to fill in the gap. Father Rutherford notes that the original 1969 directions updating the funeral rites after the Second Vatican Council gave families the option of saying a few words of greeting or thank you after Communion, before the body was carried out in procession to the cemetery. “That 1969 rite was the culmination of a whole series of experiments across the world over the five previous years,” says Rutherford. The idea of a moment of greeting or acknowledgement came from the sense that there was a need for “a human touch,” said Father Rutherford. “It gives the family a chance to thank people for coming.”

A big part of the problem when it comes to planning for eulogies is that the funeral liturgy was not designed with them in mind.

But once it was included, it almost immediately became a time for sharing stories about the deceased. “It quickly got out of control,” says Father Rutherford. “It wasn’t just one person; they went on too long. Sometimes there’s an open mic. It was meant to say something simple, but it took on a life of its own.”

At times pastors or bishops have tried to ban eulogies from funerals entirely. Kenneth Boller, S.J., pastor of St. Francis Xavier Parish in Manhattan, remembers pastors seeking help from the Archdiocese of New York with this after the terrorist attacks of Sept. 11, 2001. “Post-9/11 there were an enormous number of funerals of young people who had perished. It went on for a couple of years,” he recalls. “It was a very emotional time.” People often had a very difficult time getting through eulogies. “Pastors were looking for a rule from the archdiocese” to help guide the faithful and maintain some sort of boundary, Father Boller recalls.

The archdiocese issued a ruling that the proper place for eulogies was at the wake service, the first of the three rituals provided in the official Order of Christian Funerals; there were to be no more eulogies at Mass. But since then, says Father Boller, “It’s been honored more in the breach. Things find their own way.”

Still, 20 years later, when the Covid-19 pandemic prevented families from having funerals for their loved ones, Father Boller remembered another idea that had been suggested by pastors in 2001: “One of the things that had been recommended was, if you couldn’t do words of remembrance at a funeral home, do it before the funeral liturgy.”

This practice seemed to make a lot of sense for the situations in which there were few wakes and there were long gaps between a person’s death and their memorial Mass. “The immediacy of the grieving was gone,” Father Boller said.

The practice of having a eulogy or eulogies near the end of Mass is like having a 20-minute intermission right before the climax of a movie.

As churches reopened, St. Francis Xavier Parish instituted the practice of inviting a speaker to offer brief words of remembrance from the ambo immediately after the gathering song of the Mass. And it has had a significant positive impact on funeral liturgies. “It recreates the memory of the deceased for the mourners,” says Father Boller, “conjuring them up” in the minds and hearts of those in attendance, some of whom might not have seen the deceased for some time. “A story or two, a little sketch of the history of the deceased and [the speaker] sets the stage for the prayer.”

It also takes a certain pressure off the presider. “In a parish, you don’t always know the deceased,” Father Boller explains. By allowing someone who knows and loves the one who has died to speak first, the presider “doesn’t have the burden of trying to pretend an intimacy with the deceased that is not there.” Instead, Father Boller said, he can focus on “our hope for the resurrection and how we try within our means to live a decent Christian life.”

I have been to funerals at St. Francis Xavier that were done in this way, and what surprised me most was not the impact of their practice on the beginning of the liturgy, but the way hearing a remembrance early on in the Mass affected the end. Having become accustomed to a pause in the liturgy after Communion for remarks from friends and family, I had no sense of how naturally the liturgy flows from Communion to the final commendation, the emotional and spiritual movements of that progression. The practice of having a eulogy or eulogies near the end of Mass is like having a 20-minute intermission right before the climax of a movie. We interrupt the funeral liturgy precisely at its culmination.

“There’s integrity to the ritual,” Father Boller says. “The funeral Mass is very beautiful.” By placing the words of remembrance at the beginning, we maintain the flow of focus from deceased to Eucharist to final commendation.

The practice is not foolproof. The risk in putting the words of remembrance at the beginning is the same as for the end: “that they go too long,” said Father Boller. He does his best to prevent that. “You just try to be honest and direct. [You tell the speakers] This is an opportunity to remember your loved one and to remind everyone who that person was in your life. But we have the whole Mass to follow, so we have to be mindful of our time.”

He urges them to write their speeches down, too. “The best ones keep it to about five minutes,” he says. “But you don’t have complete control.”

Father Boller finds the upsides of offering words of remembrance at the start of the Mass has surpassed the occasional problem. “If somebody has brought the memory with a poignancy to the forefront [at the beginning of Mass], the ritual of the prayers takes care of the rest.”