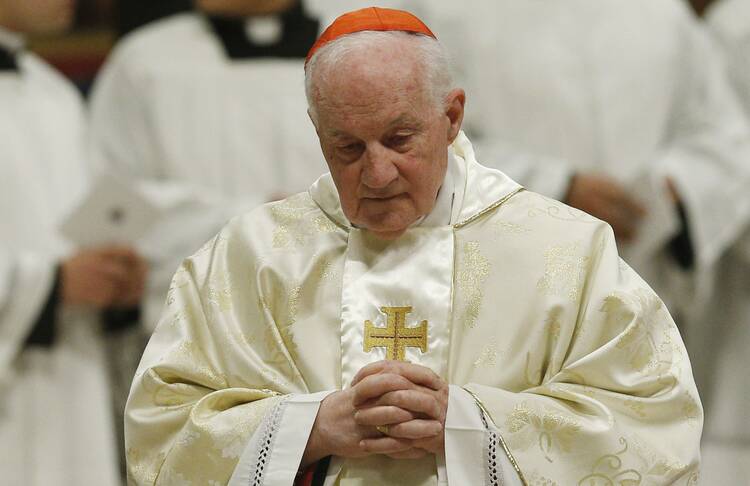 Cardinal Marc Ouellet, prefect of the Dicastery for Bishops, attends Pope Francis' celebration of Mass marking the feast of Our Lady of Guadalupe in St. Peter's Basilica at the Vatican Dec. 12, 2022. (CNS photo/Paul Haring)

In a stunning move, Cardinal Marc Ouellet, 78, has filed a lawsuit for defamation against a Canadian woman, named only as “Ms. F.” for making “unfounded accusations of alleged sexual assault” against him and joining in “a collective legal action” filed in Quebec on Aug. 16.

In a statement released in French and English on Dec. 13, the cardinal, who is prefect of the Dicastery for Bishops, again “firmly denied” her “slanderous and defamatory accusations” and said he has taken this “painfully necessary” action in the courts in Québec “in order to prove the falsity of the allegations made against me and to restore my reputation and honor.”

He has demanded $100,000 financial compensation, which, if granted, he said “will be donated in its entirety in support of the fight against the sexual abuse of the Indigenous Peoples of Canada.”

In a stunning move, Cardinal Marc Ouellet, 78, has filed a lawsuit for defamation against a Canadian woman for making “unfounded accusations of alleged sexual assault” against him.

The cardinal’s statement and the legal text of the claim for defamation were released in Rome late this afternoon. The cardinal is referred to in the text as “Mr. Ouellet.”

According to the legal document filed by the cardinal’s lawyers, “Ms. F. blames Mr. Ouellet for his behavior during four public meetings she allegedly had with him in the late 2000s.”

She accused him, among other things, all described in detail, of inappropriately touching her at a meeting of the Québec archdiocesan staff in 2008, when he was archbishop, and kissing her, pressing against her and making inappropriate comments at other gatherings.

The legal text states that “Mr. Ouellet denies having had the interactions described with Ms. F.” and “Mr. Ouellet has no recollection of ever having met Ms. F. He does not know her.”

“I have never been guilty of these reprehensible behaviors, much less of those alleged against other members of the clergy cited in the class action” lawsuit filed against the Archdiocese of Québec and involving more than 100 victims of alleged abuse, the cardinal said.

Cardinal Ouellet said it was “inappropriate” to associate his name with a case involving sexual abuse of minors, but the move was “intentionally constructed and widely spread for improper purposes.”

“It is clear that the victims of sexual abuse are entitled to just compensation for the harm they have suffered,” the cardinal said in his statement. “I am sensitive to their suffering and reiterate my sincere closeness to them.”

The cardinal also released a copy of his court filing, which objected to the inclusion of the alleged incidents in a class action lawsuit in which Ms. F. “is not a representative plaintiff” and the cardinal is not a defendant.

And while repeating his denial of the allegations, the filing said, “even if we were to take the facts alleged by Ms. F. as true, facts which are categorically denied, they cannot be qualified as ‘sexual assault’ in this instance.”

Cardinal Ouellet served as archbishop of Québec from 2002 to 2010.

Archdiocesan authorities were informed in January 2021 of the allegations against the cardinal, and a leader of the Archdiocesan Committee for the Protection of Minors and Vulnerable Persons encouraged the woman making the allegation to write a letter to Pope Francis.

An email from the Vatican Feb. 23, 2021, acknowledged that the pope read the letter and that he had appointed Belgian Jesuit Father Jacques Servais to conduct a preliminary investigation, according to Présence info in Montreal.

The priest, however, was known to be a close collaborator and friend of the cardinal for many years, and his acceptance of the nomination to investigate the allegations has raised questions relating to conflict of interests.

In August, Matteo Bruni, director of the Vatican press office, issued a statement that Father Servais had concluded his investigation and presented the findings to Pope Francis who, after further consultation, decided “there are insufficient elements to open a canonical investigation for sexual assault by Cardinal Ouellet against person F.”

According to court documents, the woman, then 23 years old, began working for the Archdiocese of Québec in August 2008 and met the cardinal at a meeting of all archdiocesan personnel, which is when she said his unwanted advances began.

In a statement released in August, Cardinal Ouellet had said: “Having learned of the false accusations made against me by the complainant (F.), I firmly deny making inappropriate gestures on her person and I consider the interpretation and sharing of these accusations of sexual assault as defamatory. Should a civil investigation be opened, I intend to actively participate in it so that the truth is established, and my innocence is recognized.”