‘We have not hidden anything’: Jesuit superior general interviewed on abuse allegations against Marko Rupnik 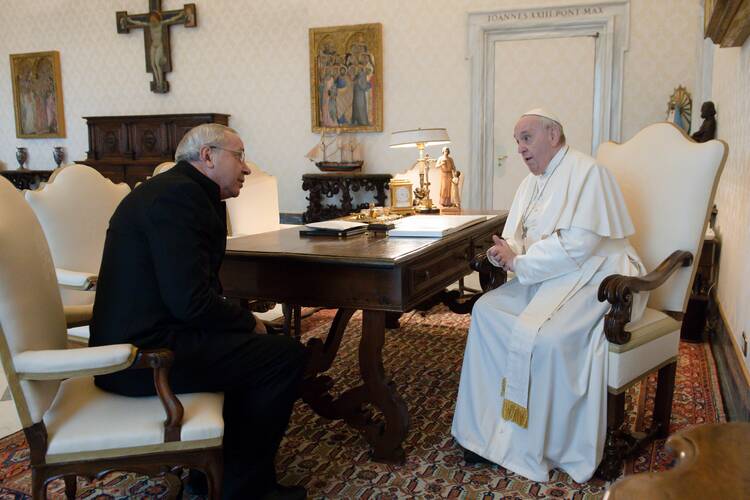 Pope Francis greets Jesuit Father Marko Rupnik during a private audience at the Vatican in this Jan. 3, 2022, file photo. Father Rupnik, whose mosaics decorate chapels in the Vatican, all over Europe, in the United States and Australia, is under restricted ministry after being accused of abusing adult nuns in Slovenia. (CNS photo/Vatican Media)

“Any case like this is very painful, [but].... we have not hidden anything,” says Arturo Sosa, S.J., the superior general of the Society of Jesus, in a short interview with 7MARGENS and Rádio Renascença, two religious media outlets in Portugal, published on Dec. 7. This represents the first public comments of the superior general regarding the allegations against the Slovenian artist Marko Rupnik, S.J.

Father Rupnik, whose mosaics decorate chapels in the Vatican, all over Europe, in the United States and Australia, has been barred from hearing confessions or offering spiritual direction after what the Jesuits described as complaints about his ministry. The Society of Jesus released a statement on Dec. 2 responding to the allegations of abuse against Father Rupnik and describing the restrictions on his ministry.

“Any case like this is very painful, [but].... we have not hidden anything,” says Arturo Sosa, S.J., the superior general of the Society of Jesus.

Italian news outlets reported the complaints were accusations of spiritually and sexually abusing adult members of a religious order of women in Slovenia. Father Rupnik lives and works at the Centro Aletti, an international community of artists and theologians, both women and men, in Rome.

Father Sosa was in Portugal for five days visiting Jesuit apostolates. World Youth Day is scheduled to be held in the country in the summer of 2023. This interview is reprinted with permission of 7MARGENS, with a translation by America.

The Society’s statement on the case came out after the first news. Why did it take so long to convey information about what happened?

First, I have to say that for the Society of Jesus any case like this is very painful. Second, we don’t have to publicize every case. One of the things we all have a right to, as people, is a certain privacy: you have to make public statements when it is public; when it’s not public, there is nothing to do, and that does not mean concealing. We haven’t hidden anything.

In this case, it seems to me important to stress a few things. One, there are no minors involved. In other words, this concerns matters between adults. Second, we did not receive the complaint directly. We received the request from the then Congregation for the Doctrine of the Faith to conduct an investigation because they had received the complaint. Precisely in order not to hide it and to do it in the most transparent way possible, we looked for investigators who were not from the Society of Jesus.

Afterwards, we delivered the report to the C.D.F., which had requested this preliminary investigation. A preliminary investigation is not a process that ends with a sentence, it is an initial look at the case. We waited a long time before we received the news from the Congregation that it had studied the case and the investigation, and that it dealt with what had happened 30 years ago and that, according to the law, it had exceeded the statute of limitations. That is the canonical part.

From the moment we received the request to do this investigation—we did not receive the complaint—we immediately took action, proportional to the facts. Father Marko Rupnik was forbidden from hearing confessions, leading the Spiritual Exercises, providing spiritual direction and making any public statement, teaching, or any such activity that would need to be authorized by his local superior.

That is what was done throughout this time, after we received the notification from the Congregation that the facts of this case had exceeded the statute of limitations. The measures were maintained, because we want to go further into the matter, to see how we can help everyone involved.

But the statement makes no mention of the victims. Given the renown of Father Rupnik, was it not justified to publicize the case?

You have to ask the victims. I cannot speak for someone who does not want to.

Why are the victims not mentioned in the statement?

Because there is no process that says that here there is a victim and there a victimizer. It was beyond the statute of limitations. There is no classification of victims, there is a suspicion of facts that went beyond the normal limits between adult people.

Was one of the measures taken Father Rupnik’s exit from the direction of Centro Aletti?

That happened much earlier. He left Centro Aletti more than a year ago [in 2020] for reasons internal to the organization of the center, because he had been in the role a long time and already had committed to many artistic projects.

He continues to travel and do various things. For example, in February a retreat is planned at the Loreto shrine. Does that not enter into the planned measures?

I don’t think a retreat is planned, but he should not [do it]. He is not under arrest, and no measure impinges upon his artistic work. He has very important artistic commitments. He can celebrate the Eucharist, what he is forbidden from is directing spiritual exercises or hearing confessions. Those are the measures, because it has to be proportional to the facts.

He still has the same mobility as any of us, for work reasons. He is not constrained to those kinds of measures. Those to which he has been subjected he has complied with.

Can this case and others that happen not reduce the young people’s enthusiasm to join the invitations of the church, such as World Youth Day?

In some cases yes, in others no, I wouldn’t dare to make a general judgment. There are some people who have lost confidence in the church or the Society, others not. We pray the Lord’s Prayer every day. And there we say that we want to forgive.

All these cases are very painful. The behavior of many religious was, in many cases, unacceptable, sinful. What does one do? One seeks a road that, if it is sin, it should be forgiven. You apply all the civil laws that are necessary, you apply all the canon laws, but in the end, what we want with people—the victims and the perpetrators—is that they forgive one another. In other words, open up that process so that people can be reconciled.

You have come to take the pulse of the Jesuits in Portugal. What conclusion do you draw?

Among young people, it is understood that situations are not black and white, there are many things that can be done. Here in Portugal, the Jesuits’ work with young people is admirable, I believe it is a model for many provinces. The contact I have had with parish communities and the university community is encouraging.

Knowing the church all over the world, what is your great concern?

The greatest concern is that we are able to bring to life this idea that we now call the synodal church, which was born at the Second Vatican Council, which was tried for many years and which has now received great impetus from the Holy Father and other people in the church. [May we not] lose the opportunity, again, to convert the church into this people of God that walks together with humanity in search of justice and peace.

Includes reporting from the Associated Press. 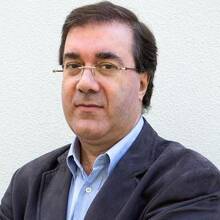 António Marujo
Show Comments ()
Join the conversation: Login or create an account
Before you can comment, you need to update your profile to include your first and last name, as required in our comments policy. Then reload this page and you'll be set up for commenting. Update your profile