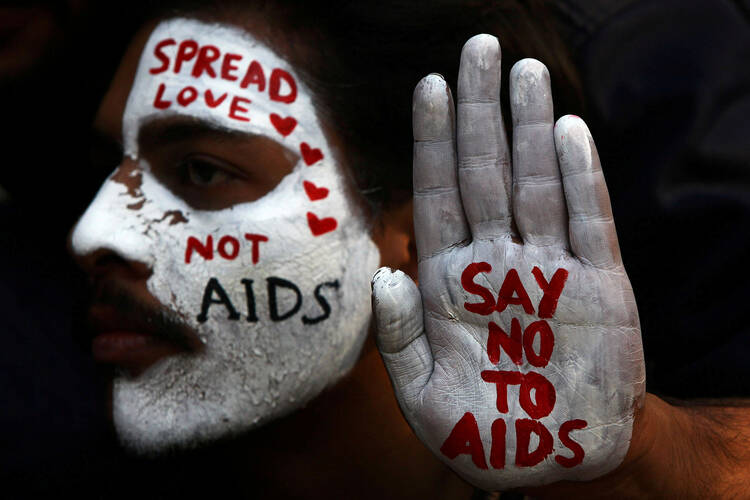 A decades-old memorial for people who died from AIDS-related complications has found a new home in a New York City church.

On Friday, the Jesuit-run Church of St. Francis Xavier will host its annual service to mark World AIDS Day, observed on Dec. 1, an annual tradition at the parish going back decades. But this year, the evening will include the blessing of more than 500 individual plaques that comprise a memorial recently installed in the church, situated in front of an already existing space dedicated to remembering the early days of the crisis. The newly installed memorial was recently moved from another nearby parish, where it had stood since 1992, which was closed as part of the Archdiocese of New York’s reorganization plans.

I first reported on the memorial, which had been located in the choir loft at St. Veronica’s Church, in 2017, as part of my look into the Catholic Church’s response to H.I.V. and AIDS, first presented in the America podcast “Plague” and then my book, Hidden Mercy. Five years ago, the Greenwich Village parish had been slated for closure by the archdiocese, and I visited the memorial just before the community celebrated its final Mass. A group of parishioners and neighborhood activists worried what would happen to the memorial, which they said was the first AIDS memorial in New York.

A decades-old memorial for people who died from AIDS-related complications has found a new home in a New York City church.

At the time, I noticed that the memorial was fairly difficult to find, located up a steep flight of stairs, the plaques facing away from the congregation below. While the church building itself was ultimately saved, today it is no longer a regular worship site. It is open for just two Masses each year, making visits to the memorial even more difficult.

Earlier this year, the memorial was relocated, about a mile north to Chelsea, where it now sits inside St. Francis Xavier, a parish with a long history of ministering to L.G.B.T. Catholics.

Kenneth Boller, S.J., the pastor of St. Francis Xavier, told America that the archdiocese asked a group of priests last year if any of their parishes would be willing to serve as the new home for the memorial. The parish already had its own AIDS memorial, which includes a statue of St. Aloysius Gonzaga, who is often associated with H.I.V. and AIDS because of his ministry to victims of a 16th-century plague, along with a book of remembrance and an icon by the Rev. William Hart McNichols, which depicts Jesus holding a candle, a tribute to the candlelight vigils common in the early days of the AIDS crisis. After Father Boller visited the memorial at St. Veronica’s, he and some parishioners thought that memorial could fit in nicely at St. Francis Xavier.

Working with a local carpenter, the parish moved the slats of wood and the plaques to an area in front of the Aloysius statue. They also installed a kneeler, in order to offer people a space to pray for those individuals whose lives have been affected by H.I.V. and AIDS, and they are working on plans to install a sanctuary lamp that previously hung at St. Veronica’s.

“Our mission is simply to honor the memory of those who perished and to give an opportunity for their loved ones to have a dignified place to pray for their deceased, which is what memorials are meant to be,” Father Boller said.

“To say that we are upset by the removal of the AIDS memorial from St. Veronica’s is a grave understatement,” Cindy Boyle, part of the group trying to save the church, wrote in an email to America.

Given the immense emotional history associated with the memorial, parish closures and the church’s history with the L.G.B.T. community, its move to a new location has not been without controversy.

A group of former St. Veronica parishioners has been trying to keep the church open as a worship space, fearful that the building could be sold and perhaps developed into private residences.

“To say that we are upset by the removal of the AIDS memorial from St. Veronica’s is a grave understatement,” Cindy Boyle, part of the group trying to save the church, wrote in an email to America. The group had asked permission to celebrate a Mass earlier this year to commemorate the 30th anniversary of the memorial’s creation, Ms. Boyle said, but they did not hear back from church leaders. Then in September, the memorial was moved.

“While we are incredibly grateful to St. Francis Xavier for giving the memorial a home,” Ms. Boyle added, “it belongs at St. V’s.”

Still, in its new location, the memorial will be more accessible, both because St. Francis Xavier is still an active parish and because it is situated in a more prominent location inside the church, just steps from the main altar.

“I’m very happy about it, that it now has a home that is public. We certainly need to continue to memorialize it because people are forgetting.”

“I’m very happy about it, that it now has a home that is public,” John Weber, who has helped lead the World AIDS Day services at St. Francis Xavier since the 1990s, told America. “We certainly need to continue to memorialize it because people are forgetting.”

Generating interest among younger people in the history of the H.I.V. and AIDS crisis can be difficult, L.G.B.T. leaders say, especially as H.I.V. and AIDS is no longer viewed as the lethal threat it once was. Rates of new H.I.V. infections in the United States have been mostly declining for years, and preventative medications and treatments mean a diagnosis of H.I.V. is chronic but manageable.

But the United Nations warned in a report earlier this year that the slow but steady progress made in fighting H.I.V. took a hit during the pandemic.

“The AIDS pandemic took a life every minute in 2021, with 650,000 AIDS-related deaths despite effective H.I.V. treatment and tools to prevent, detect and treat opportunistic infections,” the U.N. report said.

H.I.V. and AIDS are far from eradicated, with communities of color in the United States hit particularly hard.

That is partly why, some say, that memorializing the early days of the crisis remains imperative, so that communities particularly vulnerable to H.I.V. do not become complacent.

Dave Harper, the executive director of the New York City AIDS Memorial, told America that AIDS memorials continue to serve important purposes. They provide a reflecting space for those whose lives have been affected firsthand by H.I.V. and AIDS and they can help educate younger generations about the challenges from a previous time. Mr. Harper pointed to “a whole generation of L.G.B.TQ. people who feel like they don't know where they came from, who don’t know who their elders are” as one reason why memorials can serve as powerful teaching tools.

“I think there’s a desire, very much so, for folks to connect to their history, especially in light of the increasing and more apparent attacks on L.G.B.T.Q. people in this country,” Mr. Harper added.

The memorial now located inside St. Francis Xavier Church is just one example of how the Catholic Church responded in the early days of the H.I.V. and AIDS crisis.

“The memorial has a lot more significance to older members of the community, but I hope that having it there, as a shrine and a place of prayer, that it will also be a place of history and remembrance.”

Msgr. Robert Vitillo helped lead the church’s response to H.I.V. and AIDS, globally as an advisor to Caritas Internationalis and in the United States as a president of the National Catholic AIDS Network. He told America that much of the church’s AIDS ministry in the 1980s and 1990s was often carried out under the radar. In his current role as secretary general of the International Catholic Migration Commission, Monsignor Vitillo continues to advocate on behalf of communities still hard hit by H.I.V., including vulnerable women and children.

“The big issue with children with AIDS is that they don’t have their own voice to talk about it,” he said, noting that H.I.V. and AIDS affects everyone in different ways. But there is one similarity that has existed since the earliest days of the crisis.

Those early days of the crisis are preserved in the memorial now installed at St. Francis Xavier.

Father Boller said he hopes that Friday’s service and the memorial offer a sense of peace to individuals who knew the people named on the plaques as well as an opportunity for reflection for those who might not remember the crisis firsthand.

“It is an opportunity to remind people of the history of the movement and the devastation of the initial outbreak of AIDS,” Father Boller said. “The memorial has a lot more significance to older members of the community, but I hope that having it there, as a shrine and a place of prayer, that it will also be a place of history and remembrance.”