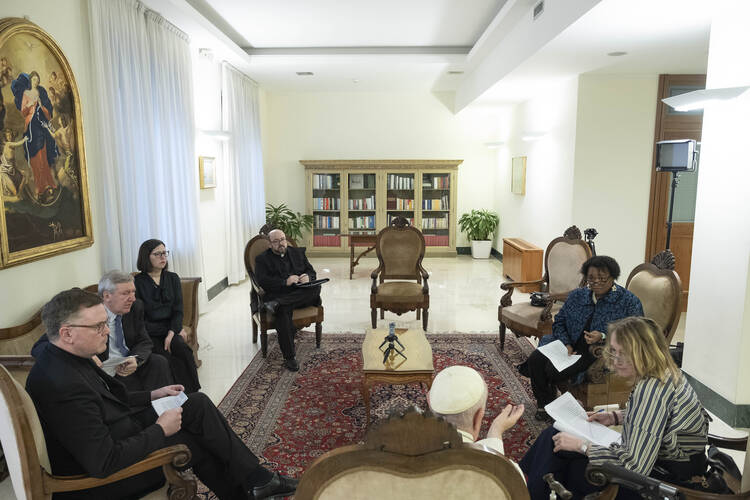 Pope Francis speaks with the editors and staff of America. Translator Elisabetta Piqué at the pope's right (America Media/Antonello Nusca)

Pope Francis called for overcoming polarization in the life of the Catholic Church in the United States and emphasized that “polarization is not Catholic,” in this exclusive interview with America, given at the Vatican on Nov. 22 and published today. To achieve this, he said bishops must be pastors not ideologues.

He denounced racism as “an intolerable sin against God,” and spoke about the role of women in the church, and the question of women’s ordination. He reflected on how pastors should address abortion and emphasized the need for the church to show “equal transparency” in dealing with priests or bishops accused of sexual abuse. He explained his sometimes-criticized stance on Russia in relation to the war in Ukraine, and his silence about human rights in China.

During his two-hour meeting in Santa Marta, his Vatican residence, with editors and staff from America, Pope Francis was mentally sharp and humorous, notwithstanding mobility problems caused by his right knee. Asked how he always seems joyful, even amid crises and troubles, he said, “God makes me happy.… Throughout my life he has always guided me on his path…. He is always at my side.”

Pope Francis called for overcoming polarization in the life of the Catholic Church in an exclusive interview with America.

In his speech to the U.S. Congress in 2015, Francis appealed for overcoming the polarization that is dividing the country, and in this interview with America he called for overcoming polarization within the U.S. Catholic Church. “Polarization is not Catholic,” he said. “A Catholic cannot think either-or (aut-aut) and reduce everything to polarization. The essence of what is Catholic is both-and (et-et). The Catholic unites the good and the not-so-good. There is only one people of God.”

“The more polarization there is, the more one loses the Catholic spirit and falls into a sectarian spirit,” Francis said. The Catholic way is to combine differences, the pope said. “This is how we understand the Catholic way of dealing with sin, which is not puritanical: saints and sinners, both together.”

When told that a survey shows that U.S. Catholics considered their bishops’ conference the “least trustworthy” as a moral guide, Francis remarked, “Jesus did not create bishops’ conferences, Jesus created bishops.” He said that “it is misleading to speak of the relationship between Catholics and the bishops’ conference” as it risks dissolving the power of the bishop. What is important, he said, is “the relation of a bishop with his people” in his diocese. Being truly a pastor is what is important, he said, and “there are some good bishops who are more on the right, some good bishops who are more on the left…but they are more pastors than ideologues” and “that is the key.”

There has been much division in the U.S. church over abortion, with the bishops’ conference highlighting it as the pre-eminent issue. Asked about this, Francis repeated the church’s teaching that abortion is getting rid of “a human being” but insisted that the church must address it in a pastoral way and not let the issue be politicized or highjacked by a political party. He said it is up to the conference to resolve whether to present abortion as the number one issue. Significantly, at the same time, he noted that bishops’ conferences can sometimes “get it wrong” and “maybe the majority is not right” when it comes to a vote.

The church has made much progress in dealing with the abuse crisis but has been more transparent when handling cases involving priests than when they involve bishops. Asked how the Vatican can improve transparency here, Francis said: “The church made the decision not to cover up” and “we have to go forward with equal transparency. If there is less transparency, it is a mistake.”

Francis has spoken more than 100 times about the war in Ukraine but has been criticized for not mentioning Vladimir Putin’s name or directly criticizing Russia. In the interview, he stated clearly “the one who invades is the Russian state,” and insisted, “I never gave the impression that I was covering up the aggression.” He said he did not name Putin, “because it is not necessary; it is already known…Everyone knows my stance, with Putin or without Putin, without naming him.” He recalled what he has done since the war started on Feb. 24, and recalled the anniversary of the Holodomor, the genocide committed by Stalin against the Ukrainians in 1932-33 when millions died of starvation.

When asked what he would say to Black Catholics in the United States who experience racism and, also, “deafness” within the church to calls for racial justice, Francis denounced racism as “an intolerable sin against God” and said he is “close to those who are suffering.” He called on pastors and lay people to continue fighting “to eradicate” racism in the church and society.

In this context of discrimination, he mentioned the Indigenous peoples of the United States and said he loves them “very much” and also does not forget the Latinos.

He spoke a lot about the role of women in the church when asked what he would say to a woman who feels called to be a priest. He described the latter question as theological and said, “I think we amputate the being of the church if we only consider the way of the ministerial dimension in the life of the church.”

Some in the United States call Francis a socialist, a communist or a Marxist, because of his criticism of capitalism. Asked to respond to this and to those who say it’s not important what he thinks about economics, he said: “I try to follow the Gospel. I am much enlightened by the Beatitudes but above all by the standard by which we will be judged, Matthew 25: ‘I was thirsty, and you gave me to drink; I was in prison, and you visited me; I was sick, and you cared for me.’” He asked, “Is Jesus a communist then?” He attributed the underlying problem for this labeling to “the socio-political reduction of the Gospel message...If I see the Gospel in a sociological way only, yes, I am communist, and so too is Jesus.”

Behind the scenes: What it’s like to interview Pope Francis
Kerry Weber

Pope Francis has been criticized, especially in the United States, for signing an agreement with China on the nomination of bishops and seemingly paying the high price of having to keep silent about China’s repression of human rights. In the interview, Francis contested this interpretation. “It is not a matter of speaking or silence. That is not the reality,” he said. “The reality is to dialogue or not to dialogue. And one dialogues up to the point that is possible.” He declared that “dialogue is the way of the best diplomacy. With China, I have opted for the way of dialogue.” He admitted, “It is slow, it has its failures, it has its successes, but I cannot find another way.”

Francis has been pope for almost 10 years, so I concluded the interview by asking “if you look back, are there three things that you would have done differently, or that you regret?” He answered in English, “All, All!” and then laughed and laughed, and said: “I did what the Holy Spirit was telling me I had to do. And when I did not do it, I made a mistake.”

Support for America’s Vatican coverage was provided by Mary Alice and Thomas Roberts, Cathy and Peter Smyth, and Betsy and Michael Zink.