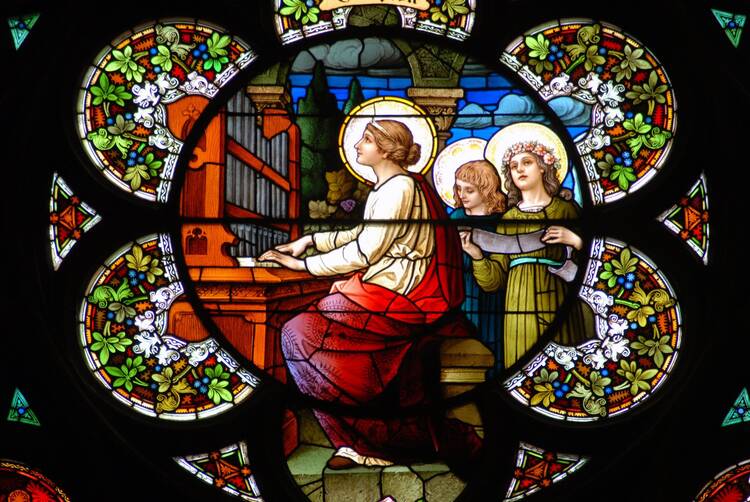 St. Cecilia is depicted in a stained-glass window at the Cathedral of the Immaculate Conception in Denver. Her feast day is celebrated Nov. 22. (CNS photo/James Baca, Denver Catholic Register) (Nov. 14, 2006)

A Reflection for the Memorial of St. Cecilia, Virgin and Martyr

Today’s Scriptures are searing warnings. But we are also reading these on a day when we remember St. Cecilia, celebrated during my childhood with “¡Feliz día de tu Santo!” as my madrina hugged me and gifted me sweets. How to make sense of the convergence of this feast day and the ominous Scriptures?

I grew up and asked questions about Santa Cecilia. She was the patron saint of music; that was the reason my musician mother named me after her. Why, I wondered, were people not more shocked at the horror of her story? Today, the legend discloses a child bride in a forced marriage, state-sanctioned religious persecution and the murderous conflicts that, then and now, rob women of their dignity in multiple ways. As the young Cecilia in Rome and the young women of Iran, Afghanistan, Ukraine and many places known and unknown remind us, God’s most vulnerable people cry out and the world cares little. In the next 11 minutes, a girl or a woman will be killed in their own home, victims of family members or partners. When we think of Santa Cecilia, we should think of them.

As girls die before their time, unable to sing again, our Scriptures remind us of God’s judgment. The Scriptures stress that this isn’t about individual sinfulness, this is about the entire earth. Horrors like violence against women are facilitated by systems that deny them education, leadership and political voice. They require global outrage because they are a global sin. “So the angel swung his sickle over the earth and cut the earth’s vintage. He threw it into the great wine press of God’s fury.”

God’s fury. Let’s hold on to that image.

In the next 11 minutes, a girl or a woman will be killed in their own home, victims of family members or partners. When we think of Santa Cecilia, we should think of them.

My late father-in-law, Yvon, was 19 years old when he parachuted into occupied France to fight the Nazis. His experiences were like those of his contemporary, Johann Baptist Metz. Both were the only survivors from their unit. Metz recalled that “I could only see dead and empty faces, where the day before I had shared childhood fears and laughter. I remember nothing but a wordless cry.” God’s fury was in that cry. As the great Eli Wiesel reminded us in Night, God was not absent in suffering; God was there, “hanging on the gallows.”

God is with each victim requiring our response. The experience of World War II made my father-in-law a man of peace and a beloved role model for all who met him. The war made Metz a priest and one of our most influential theologians, who ushered in a new way to engage faith. Metz insisted that faith should activate the church community to critique society. God’s fury, as the curtain of the Temple was torn at Jesus’ death, was not private, but a public matter. It had to do with history.

And so humanity’s thirst for power murdered the One who had come to be with us, and a young girl who followed him named Cecilia also died a victim of state violence in a world where she was only someone’s property. Today, the joint effects of the pandemic, the upheaval brought by climate change, cyber-crime and the armed conflicts raging all over our planet have resulted in terrifying increases in violence against women. Metz read the Scriptures and saw that the Church, heir to the community who loved Jesus, was not a reality that existed alongside or above society, but within society and within history. This, he argued, required the community of faith to take an active stance in criticizing society and in bringing about the peace and freedom promised in Jesus’ announcement of the Reign of God. Even as Jesus’ voice was silenced on a cross, his resurrection shows God is on the side of the victims.

Our young people today need to know that we, as church, feel God’s fury at the violence against women on our street or on the other side of the world, and that we are ready to intervene in all the ways we can, so there are no more martyrs, ever, like Santa Cecilia.