‘Think Like a Jesuit’: The new video series that takes an Ignatian approach to uncomfortable conversations 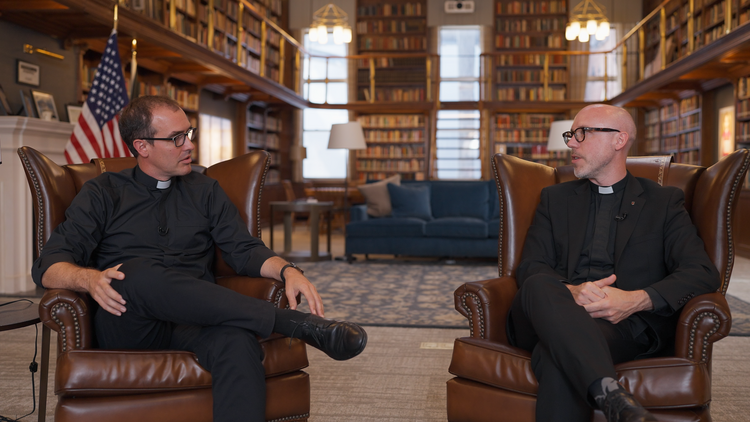 Eric Sundrup, S.J. (left), and Paddy Gilger, S.J., during the production of “Think Like a Jesuit,” a new show from America Media.

Disagreement gets a bad rap nowadays. It appears that to sustain any friendship or even to keep civil, amicable relationships with each other, either we need to agree (and be best of friends) or agree to disagree (and avoid future discussions that we think might breed further disagreements).

At America Media, we are committed to having these difficult conversations and to sustaining intense and challenging disagreements, as long as these are underpinned with the love, understanding and common premise that every human person is created, respected and loved by God, has a point of view to contribute and deserves respect.

Yes, there may be things that are just straightforwardly wrong, outright lies or misinformation, and these need to be called out, without compromise. More often, though, it is simply that we are not prepared to listen to each other and to sit with what another’s disagreement does to us, either because we simply cannot agree or because they move us toward changing our position in something we hold deeply and passionately.

That’s why we’ve created “Think Like a Jesuit,” a new YouTube series that offers you tools for having those uncomfortable conversations. (Perhaps just in time for those awkward moments around the Thanksgiving table, when someone tries to break through the thick silence of growing familial resentments by saying: Pass the salt, please!)

The hosts of the show, Paddy Gilger, S.J., and Eric Sundrup, S.J., also of Jesuit Autocomplete fame, draw insights from the spirituality of St. Ignatius of Loyola—who was no stranger to disagreement and challenges in his time, even surviving the Spanish inquisitors—to wade into these difficult issues.

Whether it is over politics, race, liturgy, or who can and cannot receive holy Communion, we want you to feel that you can have those challenging and uncomfortable conversations, and to agree and disagree—passionately—and still be able to look each other in the eyes.

Whether it is over politics, race, liturgy, or who can and cannot receive holy Communion, we want you to feel that you can have those challenging and uncomfortable conversations, and to agree and disagree—passionately

After filming the five-part series, the first episode of which is available today, we spoke with Father Gilger and Father Sundrup to learn more about the inspiration for the series.

What is the idea behind the new series, “Think Like a Jesuit”?

Eric Sundrup, S.J.: Some conversations take more time than others. There are lots of different modes of thinking. I mean, I prefer making jokes (bad ones, if you ask Paddy), but sometimes you need to dive deeper and sit with things a little longer. The team at America wanted to try that out and see if we could make it work in a video format. I can’t thank the crew at America enough; they took some really hard conversations and long discussions and made this all very accessible.

Patrick Gilger, S.J.: The more complex the world gets, the faster it moves and forces us to move—the harder it is to understand. And often this means we stop trying to do the hard work of understanding and instead rely on labels to get a grip on a world that’s rushing and sprinting and racing. Eric and I and the producers of “Think Like a Jesuit” felt like we wanted to help slow the world down by talking and thinking through some of these complex and tense ideas that face Catholics today. We’re hoping that listening to these conversations might give you ways not just to understand but really to love a world that puts us in tension.

How did this evolve out of “Jesuit Autocomplete” (or not)?

PG: “Jesuit Autocomplete” episodes were fun and made us laugh and think and pray. But when we started talking about what else we might want to do, the desire that kept coming up in us was to find a way to go deeper into some of the difficult issues, the places of tension, that we face as American Catholics. Eventually we just thought: Why don’t we try to model what a conversation that is unafraid of the tension looks like? Why don’t we try to show what it looks like for Jesuits to talk with one another about these difficult issues? So, even though these videos aren’t as light as Jesuit Autocomplete, we hope the heart of the project is the same: friends talking with one another about things of the Lord.

What do you hope viewers will take from watching it?

ES: I hope that people that love snacking with us are willing to sit down for a full meal. It’s more of a commitment, but it’s worth it.

PG: What I really hope is that watching these conversations will help you have similarly discerning conversations about similarly difficult issues. In other words, I hope that they will show that there’s a way to talk with one another rather than just about one another.

Why is this kind of conversation important for the church at this moment?

ES: Look, let’s be honest, we avoid these conversations because people get upset, people have strong opinions and things can quickly get tense. But avoiding the discussions just leads us to increasing separation. We can’t just hang out in our preferred echo chambers. We can’t keep doing that; it hurts our communion and our community. We can disagree, but let’s talk about why and how—and agree that even if we strongly disagree, we aren’t going to tear up the community because of it.

PG: In times like ours, two responses become all-too-normal. On the one hand, it is tempting to let our responses to conflict become ideological. We can think that since we already know what the right answer is, we can use an idea to resolve the tension. (We have to admit that both the right and the left in the Church are tempted in this way.) But on the other hand, conflicts and tensions can tempt us to stop engaging, to withdraw from hard conversations and the communities that trigger them. What I notice in our society right now is that both of these responses are absolutely normal. But that doesn’t mean they’re Christian. I hope this new series helps us cultivate Christian responses to the complex, tense, difficult, lovable world in which we live.

“Think Like a Jesuit” is produced and edited by Kevin Jackson. New episodes will be available each week for the next five weeks on America’s YouTube channel.