On hot dog vendors, crooked taxes and loving the poor 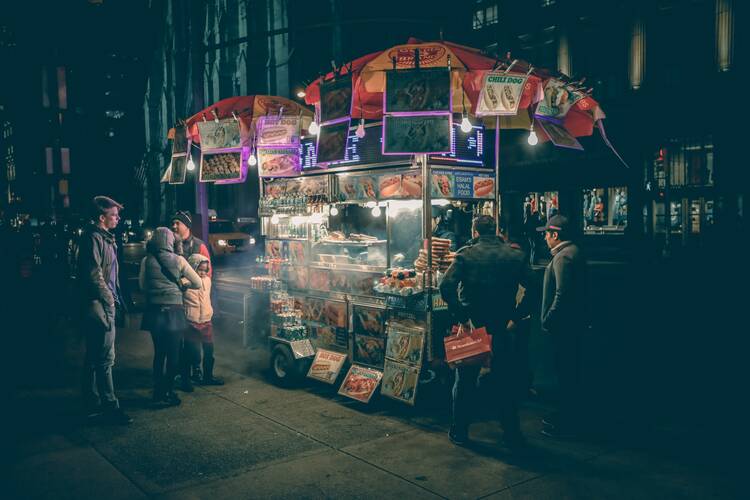 Jesus entered the temple area and proceeded to drive out
those who were selling things, saying to them,
“It is written,
My house shall be a house of prayer,
but you have made it a den of thieves.” (Lk 19:45-46
)

It’s a weird reality of the cycle of readings that between the repetition of certain stories across Gospels, the three-year cycle of Sunday readings, and the two-year cycle of daily readings that we sometimes get the same Gospel story twice in quick succession. We heard a different version of today’s Gospel of Jesus throwing out the money changers just last week, and Jim Keane offered some typically insightful reflections.

Reading Luke’s version of the story today, I found myself struck by its strangeness. Sure, people should not be selling items in the courtyard of the temple. But freaking out about it to the point of throwing over tables—as the hip kids say, it’s kind of a weird flex.

But between you and me, I love it when I don’t get a reading. So much of the time the Scriptures seem so familiar it can be hard to register their significance. Things that are confusing make me sit up and take notice.

Digging into the background of the story, it turns out salesmen in the temple are not like hot dog vendors or people on Midtown street corners selling 2022 sunglasses on New Year’s Eve. Everyone coming to the temple for Passover needed to pay a temple tax. But you couldn’t pay in Roman or foreign coins, which for many people meant having to exchange their money for shekels.

So much of the time the Scriptures seem so familiar it can be hard to register their significance. Things that are confusing make me sit up and take notice.

Others in the temple sold lambs for the Passover sacrifice, or they could be paid to evaluate the lamb you had brought. And once again, because people coming to the temple needed these things done, they were ripe to get fleeced by dishonest businessmen.

Here’s the thing: Every Jewish man had to come to Jerusalem for Passover. While there were synagogues all over the place, for Passover and a couple of other important holy days, you had to come to the temple, no matter what your business or situation. So those hawkers likely weren’t ripping off locals who would know better. They were targeting travelers, many of whom were undoubtedly poor.

Jesus’ ministry was characterized by many things: big meals, arguments with religious leaders, healings of various kinds. But one thing all his actions had in common was a desire to liberate people from the forces that sought to isolate or demean them. The Kingdom of God is a place where all are welcome and safe.

Most of Jesus’ actions seemed to pay special attention to religious or social outcasts. But in this story, close to the end of his life, he makes it abundantly clear that God is just as concerned about the materially poor, if not more so. As we enter into this season of holidays and also poorer weather, maybe we can be, too.