When Jesus shows his human side 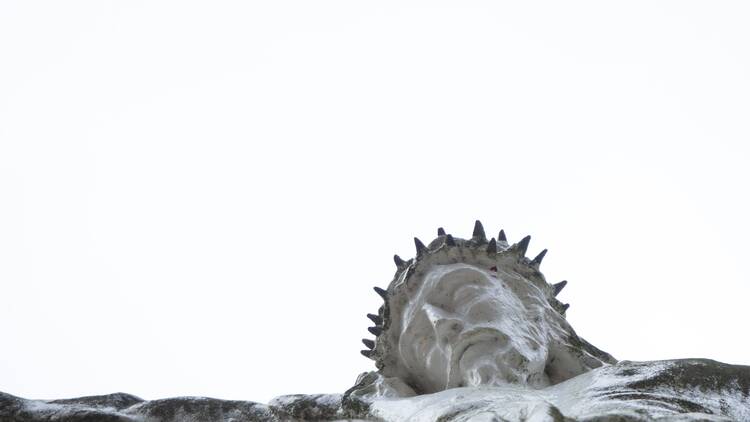 Since the Passover of the Jews was near, Jesus went up to Jerusalem. He found in the temple area those who sold oxen, sheep, and doves, as well as the money-changers seated there. He made a whip out of cords and drove them all out of the temple area, with the sheep and oxen, and spilled the coins of the money-changers and overturned their tables, and to those who sold doves he said, “Take these out of here, and stop making my Father’s house a marketplace.” His disciples recalled the words of Scripture, “Zeal for your house will consume me.” (Jn 2: 13-17)

“Mark you this, Bassanio,” Antonio says in Shakespeare’s “The Merchant of Venice,” “The devil can cite Scripture for his purpose.” So too have many people throughout history who are not necessarily devilish—but are potentially up to no good—used Jesus’ behavior in today’s passage from the Gospel of John to justify all manner of shady behaviors. You can see the temptation, because this is not the Jesus we’re always used to seeing in Scripture: He seems to lose his temper, and he seems to choose violence. He seems to be acting like a lot of us act when we’re not at our best.

It is said that some of the other bishops at the Council of Constantinople in 381 A.D. accused Theodore of Mopsuestia of beating up his own priests on occasion. Maybe so, Theodore purportedly responded, but didn’t Jesus use a whip on the moneychangers? More than a millennium later, John Calvin agreed to have the theologian Michael Servetus burned alive because he denied the divinity of Jesus; harsh, perhaps, Calvin said, but what about Jesus purifying his Father’s house? Even Bernard of Clairvaux made use of the passage, to justify the Crusades. After all, didn’t Jesus use violence to keep sacred what was holy?

But why did Jesus do it? In the synoptic Gospels, this scene in the temple courtyard works as a kind of provoking incident near the end of Jesus’ ministry: It gives everyone a reason to kill him. But in today’s passage from John, we have barely met Jesus—he’s fresh off the wedding feast at Cana. Some Scripture scholars say this is when Jesus first shows his divinity, but I think there’s something else: It’s where Jesus shows his humanity. Because it doesn’t take the beatific vision to confront hypocrisy and corruption.

​​Remember what Pope Francis told the millions gathered for World Youth Day in Rio de Janeiro in 2013? Hagan lio. A rough translation into English might be “Make a fuss.” “Cause a scene.” “Make some noise.” Calling forth the crowd to be disciples, Francis reminds them that discipleship does not require accepting the status quo. Rather, it might require disrupting it.

Is that the Jesus we see today? Beginning his ministry, he decides to make some noise, cause a fuss. After all, young or old, we all know of some tables that need to be overturned.

James T. Keane
@jamestkeane
Show Comments ()
Join the conversation: Login or create an account
Before you can comment, you need to update your profile to include your first and last name, as required in our comments policy. Then reload this page and you'll be set up for commenting. Update your profile