I’m a transgender woman. Here’s what I want the Catholic Church to know about my life. 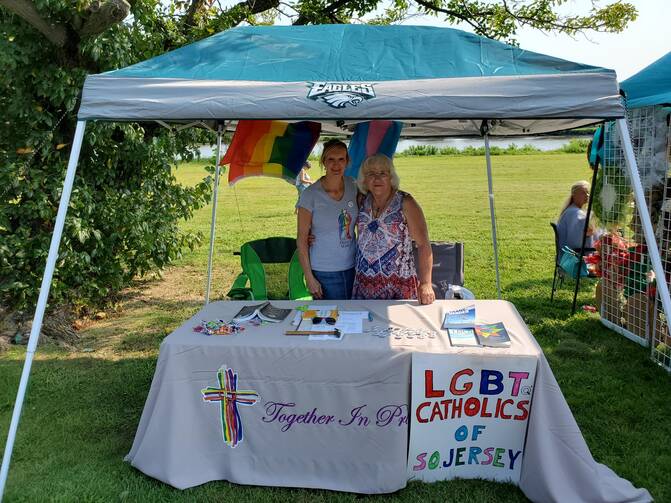 The author, left, with her friend Fran McGarry, at South Jersey Pride in the Park, in Cherry Hill, N.J. (Photo courtesy of author)

About eight years ago, after 29 years of marriage to my wife and two beautiful children, I walked into confession with something to discuss.

For as long as I could remember, since about the age of 3 or 4, I knew that I was different. As a child, for years I would go to bed praying that I would wake up as a girl. This is a story commonly echoed by many transgender people like myself.

I am a lifelong Catholic. As part of my transition, I decided to speak to a priest during the sacrament of reconciliation. I obviously knew what our church taught with respect to being gay. At that point, however, the church was still silent regarding transgender persons.

My faith has always been strong. I’ll never claim to be the perfect Catholic; I do make mistakes. Occasionally (but not often), I miss a Sunday Mass, and I’ve been known to utter a bad word once in a while (especially during Philadelphia Eagles football games). I do my best to be a good person, though, trying to live each day as if it may be my last.

I’ve been blessed. While I had a very positive reaction from my priests, I know others who have experienced the complete opposite.

I was, and still am, very confident in my relationship with my God. I knew I would be the same person walking out of the confessional as walking in, no matter what some might say or claim about me. While my “outside” was changing, everything else—my heart, my mind, my soul and my faith—remained unchanged.

When I told our associate pastor I was transgender, the conversation immediately diverted to sex. “Excuse me, Father,” I remember saying, “this has nothing at all to do with sex; this has to do with who I am. You can throw me out if you want, but if you do, I’m coming right back. This is my church too.” Father said he was not planning to do that. After a little more discussion, he said, “Let’s together say a prayer to our Blessed Mother to help guide you on your journey.” I was crying as I left confession.

About a month later, I returned to confession again, this time to our monsignor, whose first words were, “God loves everyone.” I cried again. Monsignor did say, however, that while he understood what it meant for people to identify as gay, “the transgender subject is somewhat new.” He told me: “I’ll need you to help me learn.”

I’ve been blessed. While I had a very positive reaction from my priests, I know others who have experienced the complete opposite. They were told that they are sinners, evil or that they’re not Catholic. One of my best friends was even physically carried out of church during Mass after being refused Communion.

About a year after my transition, our monsignor asked if I would be interested in becoming an extraordinary minister of holy Communion.

Many people still are learning about transgender persons. Before the Covid-19 pandemic shut down our daily lives, I had lunch with a local priest who had baptized my grandson. He wanted to learn more about me. One of the first things he asked was if I was ever physically or sexually abused when I was young, because it was his understanding that people become transgender as a result of abuse. I have never been abused.

About a year after my transition, our monsignor asked if I would be interested in becoming an extraordinary minister of holy Communion. Shortly thereafter we also started an L.G.B.T.Q.+ ministry in our parish.

It was through this ministry that I became aware of other, similar ministries across New Jersey, Pennsylvania and New York. The Covid-19 pandemic introduced the world to Zoom, and this technology has allowed many people across the country and the world to become acquainted and to share stories. Through Zoom, I’ve participated in numerous parish L.G.B.T.Q.+ ministries as well as informational sessions with priests, religious and diocesan school administrators to help them better understand and accompany transgender adults, youth and children. I’ve met many loving, kind, wonderful L.G.B.T.Q. Catholics and allies.

About four years ago, I was invited (along with 17 gay and lesbian Catholics, supportive clergy, and parents) to dinner with Cardinal Joseph Tobin at his residence in Newark, N.J. It was a beautiful and amazing evening. An introductory reception preceded a beautiful dinner and conversation, after which Cardinal Tobin sat back and asked each of us, “How can I help you?”

I often wonder, however, what it is about me and people like me that causes so much fear among my fellow Catholics. Why am I and the transgender community selectively targeted by some as a threat to the family and the world. Nothing could be further from the truth.

I understand our faith says that “God made them male and female.” But God made a whole lot more, and everything in between. Our world, science, technology, even our church, has changed over time. Today’s science recognizes that something can happen between the body and mind, causing a misalignment between the two. I don’t often quote science, though. I just know that “I am,” that God made me this way, and that God made me this way for a reason.

I don’t wake up in the morning thinking about being transgender. Our lives are no different than anyone else’s. We live, we work, we pray. We have families.

We ask simply to be accepted and to be a part of our church, no better or worse than divorced Catholics, or Catholics who may not strictly follow other church teachings.

Pope Francis has spoken out for L.G.B.T. Catholics, saying that God “does not disown any of his children.” He is reported to have told Juan Carlos Cruz, a sexual abuse survivor and a gay Catholic man, that “God made you this way and loves you this way,” in reference to his identity. I pray that someday our church will take this to heart and that this message will reach trans Catholics, too.

Transgender persons are not an ideology. We are not a threat. All of us are a part of God’s great universe, made in the image and likeness of God, a God who is neither male nor female.

More: LGBT / US Church / Women in the Church 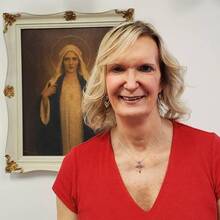 Christine Zuba is a transgender Catholic woman from Blackwood, N.J., and a member of Saints Peter & Paul Parish in Turnersville, N.J. She is chair of the Transgender Ministry of Fortunate Families. This article has been adapted from an essay published on outreach.faith.