Jesus doesn’t call us all to be apostles. Thank God. 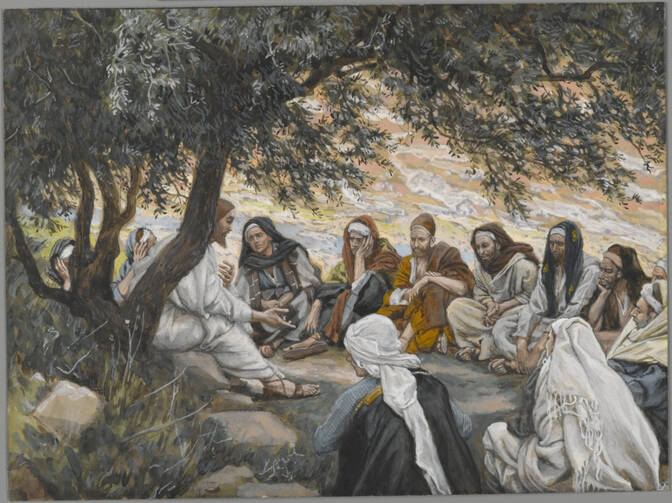 James Tissot, The Exhortation to the Apostles (Wikicommons)

A Reflection for the Feast of Saints Simon and Jude, Apostles

“Jesus went up to the mountain to pray,
and he spent the night in prayer to God.
When day came, he called his disciples to himself,
and from them he chose Twelve, whom he also named Apostles.” Lk 6:12-13

Today, the church celebrates the Feast of Saints Simon and Jude, two of the twelve apostles. The Gospel is quite short, and mostly consists in rattling off the names of the twelve that Jesus has chosen from among his larger group of disciples for this special designation.

While there are important historical and theological reasons for picking the number twelve for the number of apostles, other people in the wider group of disciples might have wondered, those guys? Seriously?

Not everyone is chosen. What do we make of this?

I’m a happily married man today, but in college I was distraught in my discernment over what I ought to do with my life. I remember thinking that if I really took this Christianity thing seriously, then the only real option I had was to become a priest.

Thanks to some good friends and Jesuit spiritual directors, I was led through a discernment that helped break some of my tunnel vision around vocation. (Pro tip: If you’re ever hearing words like “This is the only way” in prayer, it’s a good sign that the voice is not from God.)

Scripture scholar Gehard Lohfink points out (in an excellent article for America) that Jesus did not even call everyone he met to be a disciple, let alone an apostle:

He went to the home of the tax collector Zacchaeus (Lk 19:1-10) as well as that of the tax collector Levi (Mk 2:14-17). But Zacchaeus did not receive an invitation to discipleship as Levi did. Zacchaeus vows to change his life; in the future he will give half of his wealth to the poor of Israel and return wrongfully obtained money fourfold. But he will stay in Jericho and continue to practice his calling as a tax collector.

He also notes that we have no evidence that Lazarus, a friend whose death moves Jesus to tears and to his greatest miracle, was included in Jesus’ disciples. It would be ludicrous to think that Jesus thought less of people like this, or that they rejected Jesus’ message somehow. “Each person who accepts Jesus’ message about the reign of God has his or her own calling,” Lohfink reminds us. “Each can, in her own way and capacity, contribute to the building up of the whole. No one is second class.”

It may seem counterintuitive on the feast of two apostles to reflect on the ways in which we are explicitly not called to be apostles. And yet grace and freedom abound in the realization that in the Kingdom of God, there are a multitude of vocations and ways to live in the freedom of Christ. (Cue humming along to There are many parts…we are all one body).