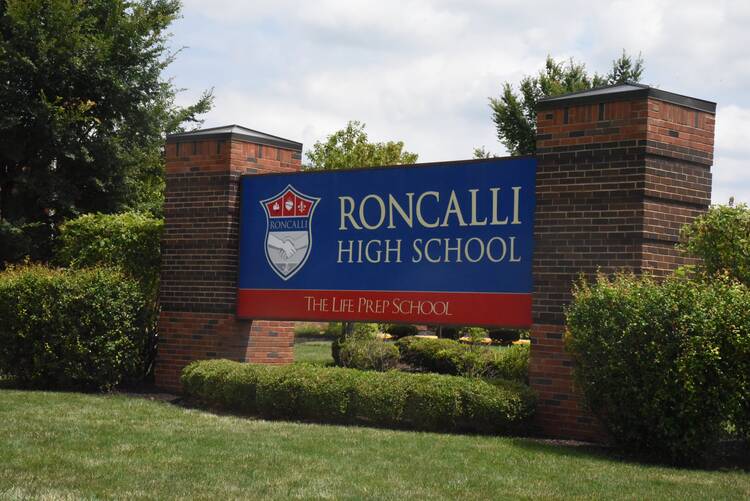 A sign for Roncalli High School in Indianapolis is seen July 23, 2020. (CNS photo/Sean Gallagher, The Criterion)

WASHINGTON (CNS) -- A federal court in Indiana sided with the Archdiocese of Indianapolis and one of its Catholic high schools in a lawsuit filed by a former guidance counselor who said her contract was not renewed because of her same-sex union.

The Sept. 30 ruling in Fitzgerald v. Roncalli High School and the Archdiocese of Indianapolis, relied on previous Supreme Court rulings that have emphasized a ministerial exception protecting a religious school’s hiring and firing practices from government intrusion.

The recent decision echoes a nearly identical ruling from a year ago based on a lawsuit filed against the same school and archdiocese from another school counselor whose contract was similarly not extended due to her same-sex union.

Young said the Indianapolis Archdiocese and its schools can select, retain or dismiss faculty according to their religious standards.

The decisions in both cases were issued by U.S. District Judge Richard Young for the Southern District of Indiana.

Young said the Indianapolis Archdiocese and its schools can select, retain or dismiss faculty according to their religious standards, something he also stressed a year ago.

The current case involved Shelly Fitzgerald, former co-director of guidance at Roncalli High School for 15 years. Her employment was terminated in 2018 after she confirmed to the school that she was in a same-sex union and the school declined to renew her contract for the following year.

School officials said her conduct was prohibited by the agreement she signed with the school.

Fitzgerald filed a discrimination lawsuit in 2019 against the school and the archdiocese.

On Sept. 29, the court threw out the lawsuit, noting that “Roncalli entrusted Fitzgerald to teach the Catholic faith and carry out” its religious mission.

Employees would forfeit their positions if they engaged in conduct that did not adhere with “the moral or religious teachings of the Roman Catholic Church.”

The contract described school employees as ministers of faith. It also contained a clause stipulating that employees would forfeit their positions if they engaged in conduct that did not adhere with “the moral or religious teachings of the Roman Catholic Church.”

The ruling on the similar case last year also involved a 2019 complaint filed by Lynn Starkey, another former guidance counselor at Roncalli.

After that ruling, Starkey appealed her case to the U.S. Court of Appeals for the 7th Circuit in Chicago, which in late July of this year determined that the Catholic school and its archdiocese have a constitutional right to hire staff who will uphold their core religious teachings.

In court documents in Fitzgerald’s case, the judge pointed out that the role of a guidance counselor is “predominately secular” and that although it could seem “a stretch” to describe a guidance counselor as a minister, the role falls under that umbrella because the school spells out in its faculty handbook and employment agreement that it “entrusted guidance counselors like Fitzgerald to convey the church’s message in addition to their secular duties.”

The judge granted summary judgment and resolved all of the claims at issue in the case.

Luke Goodrich, vice president and senior counsel at the Becket Fund for Religious Liberty, which represented the defendants, said the case echoes the Supreme Court’s stance that “religious organizations have a constitutional right to hire individuals who believe in their faith’s ideals and are committed to their religious mission.”

“This is a commonsense ruling: Catholic schools exist to pass on the Catholic faith to their students; to do that, they need freedom to ask Catholic educators to uphold Catholic values.”

“This is a commonsense ruling: Catholic schools exist to pass on the Catholic faith to their students; to do that, they need freedom to ask Catholic educators to uphold Catholic values,” he said in a statement.

Roncalli Catholic School is not the only Catholic school in the Archdiocese of Indianapolis facing lawsuits for teacher firings over same-sex marriages.

In late August, the Indiana Supreme Court said the state could not interfere in a Catholic school’s firing of a teacher in a same-sex marriage because of the school’s religious freedom rights.

That case involved Cathedral High School in Indianapolis, which fired Joshua Payne-Elliott, a social studies and world language teacher in 2019.

The court’s decision this summer, written by Justice Geoffrey G. Slaughter, emphasized that the “Constitution encompasses the right of religious institutions to decide for themselves, free from state interference, in matters of church government as well as those of faith and doctrine.”

Payne-Elliott filed a lawsuit against the archdiocese for his firing, saying it went against his contract with the school. The firing took place after the Indianapolis Archdiocese mandated that all Catholic schools in the archdiocese enforce a morality clause that did not permit employees to be in same-sex marriages.