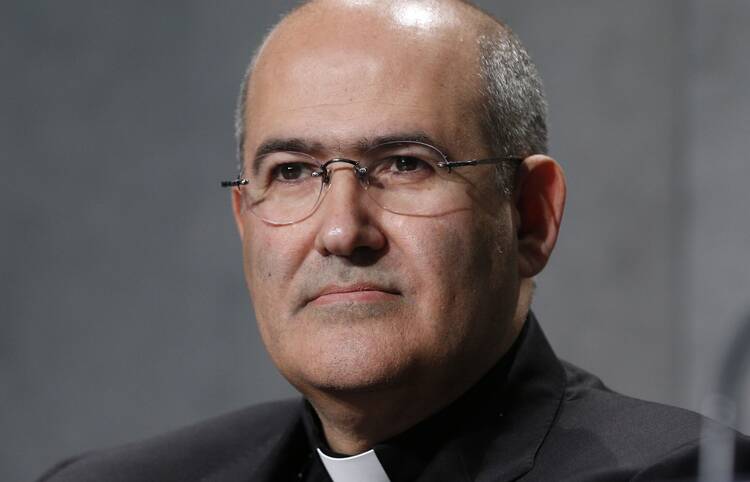 Pope Francis has appointed Cardinal José Tolentino Calaça de Mendonça, a 56-year-old Portuguese prelate, to head the Dicastery for Culture and Education, according to a statement made by the Vatican today, Sept. 26. The cardinal who, until now, served as the Vatican’s chief archivist and librarian, had long been rumored to be named prefect of this newly created Vatican office.

Cardinal Tolentino is expected to steer a staff of about 40, among them lay women and men, consecrated religious and clerics. His appointment as prefect of this dicastery—the word the Vatican now uses to refer to a department or office—comes as Pope Francis continues to replace top officials in key Vatican departments, in most cases because they have reached retirement age.

The Dicastery for Culture and Education officially began operation on June 5, when the new apostolic constitution on the reform of the Roman curia—the name given to the central organism of government in the Catholic Church—took effect. But new leadership was yet to be named for this vital Vatican department.

The cardinal who, until now, served as the Vatican’s chief archivist and librarian, had long been rumored to be named prefect of this newly created Vatican office.

The dicastery the cardinal will now lead results from the merger of what were previously two independent Vatican offices: the Congregation for Catholic Education and the Pontifical Council for Culture. Cardinal Tolentino will be assisted in the discastery by Italian Monsignor Giovanni Cesare Pagazzi, whom Pope Francis has named secretary of the new office.

Father Pagazzi was born in the northern Italian city of Crema and gained his licentiate and doctorate in theology at the Pontifical Gregorian University and has taught in various ecclesiastical faculties and institutes in Italy. At the time of his appointment, the 57-year-old priest was a professor of the Pontifical John Paul II Institute for Studies on Marriage and Family in Rome and a consultor to the Dicastery for the Doctrine of the Faith.

America has learned that Bishop Paul Tighe will continue as secretary in the section for culture of the new dicastery.

Pope Francis has also appointed Monsignor Angelo Zani, a 72-year-old Italian, to succeed Cardinal Tolentino as archivist and librarian of the Holy Roman Church. Father Zani had served as secretary of the Congregation for Catholic Education which has now been incorporated under the new discastery.

Other key appointments are expected in other Vatican dicasteries before the end of the year. Among the departments scheduled for new leaders are the dicasteries for bishops, the doctrine of the faith, the oriental churches, and the apostolic penitentiary.

Who is Cardinal Tolentino de Mendonça?

Pope Francis invited the Portuguese priest to preach the annual Lenten retreat to the staff of the Roman Curia in February 2018. At the time, he was the vice-rector of the Catholic university in Lisbon and a consultant to the Pontifical Council for Culture, but barely six months later, he was ordained a bishop in Lisbon and moved to Rome as librarian of the Vatican’s Apostolic Library and archivist of the Apostolic Archive, formerly known as the Vatican’s Secret Archives.

“I was surely called by Pope Francis to put myself in great closeness with his message, with his program for the church of our time,” Archbishop Tolentino said in remarks he gave at his episcopal ordination. “We have to go beyond self-sufficiency and self-reference, as Pope Francis says, to be a church that goes out.” [Editor’s note: The Portuguese expression used here also translates as “to be a church on the move.”] A year later, Pope Francis made him a cardinal.

Cardinal Tolentino was born on Dec. 15, 1965, in Machico, a southeastern city of the small Portuguese island of Madeira off the coast of Morocco. The youngest of five siblings, he emigrated as a young child to Angola, where he lived until the age of 11 with his mother, fisherman father, siblings and other Madeiran emigrés.

“I was surely called by Pope Francis to put myself in great closeness with his message, with his program for the church of our time,” Archbishop Tolentino said in remarks he gave at his episcopal ordination.

He began his studies for the priesthood in 1982 at the Catholic University of Portugal in Lisbon and obtained a licentiate in theology from there in 1989. In 1990, he was ordained a priest and sent to Rome to pursue a licentiate in biblical studies at the Pontifical Biblical Institute, which he completed in 1992.

After studies in Rome, he returned to the Portuguese mainland. For three years, he ministered in a parish and taught at the diocesan seminary in Lisbon. From 1995 to 2001, the cardinal served as chaplain to the Catholic university in Lisbon, after which he was appointed rector of the Pontifical Portuguese College in Rome.

He was awarded a doctorate in biblical theology from the Catholic University of Portugal in 2004, and was professor of New Testament studies and aesthetic theology there until 2018. During the last three years of his tenure, he was editor of Didaskalia, the university’s peer-reviewed journal of theological studies.

From 2011 to 2012, Cardinal Tolentino completed postdoctoral research at the Straus Institute for the Advanced Study of Law and Justice in New York. He became vice-rector of the Catholic University of Portugal in 2012 and held that post until his move to the Vatican in 2018. He served as the director of the university’s center for studies of religions and cultures from 2012 to 2017, during which time he held multiple visiting professorships at two Jesuit-led tertiary education institutions in Brazil: the Catholic universities of Pernambuco and Rio de Janeiro and the Faculty of Philosophy and Theology of the Jesuits in Belo Horizonte.

Cardinal Tolentino was born on Dec. 15, 1965, in Machico, a southeastern city of the small Portuguese island of Madeira off the coast of Morocco.

Cardinal Tolentino is the author of several essays, poems and plays, and has published numerous volumes and articles of theology and scriptural exegesis, all of which has made him a sought-after public intellectual and expert in the relationship between the Scriptures, literature, and theology. For a decade, he led the Portuguese bishops’ office responsible for promoting dialogue between the church and society, of which he was the inaugural director, and represented Portugal at World Poetry Day in 2014, an initiative of the United Nations Educational, Scientific and Cultural Organization (UNESCO).

On August 4, 2021, almost two years after Cardinal Tolentino was given the right to vote for future popes, he was admitted to the Priestly Fraternities of St. Dominic. Members of the fraternity, according to its website, “are fully Dominican priests (but not friars), … free for the complete service of the local Church, under the jurisdiction of their own bishop.”

The new Dicastery for Culture and Education

The mandate of the newly formed dicastery is summarized in articles 153-162 of Praedicate Evangelium (Preach the Gospel), the constitution promulgated by Pope Francis on March 19 for the reform of the Roman Curia.

The new dicastery is divided into two sections, one for culture and the other for education.The Congregation for Catholic Education was established by Pope Sixtus V in 1588 and most recently led by Italian cardinal Giuseppe Versaldi, who turned 79 in July.

The Pontifical Council for Culture was founded by John Paul II in 1982 and until now headed by the Italian cardinal Gianfranco Ravasi, who will turn 80, the retirement age for cardinals, in October. The section for culture is, according to the statutes of the new constitution, “dedicated to the promotion of culture, pastoral animation and the enhancement of cultural heritage.” The section for education “develops the fundamental principles of education with reference to schools and higher institutes of Catholic and ecclesiastical studies and research.” According to the 2021 Global Catholic Education Report, at least 62 million children are enrolled in Catholic pre-primary, primary, and secondary schools worldwide.

The new dicastery is divided into two sections, one for culture and the other for education.The Congregation for Catholic Education was established by Pope Sixtus V in 1588.

For more than a decade, the cardinal has written a weekly column in Expresso, a flagship weekly newspaper in Portugal. His column, “Que Coisa São as Nuvens,” (“What a Thing the Clouds Are”), borrows its name from the title of a 1967 Pier Paolo Pasolini film, “Che cosa sono le nuvole?” and his writings offer a smorgasbord of his musings on life, literature, philosophy, faith, and culture among others. “To write a column,” said the cardinal, when he received a literary prize for a published collection of his columns in 2016, “is to accept a confrontation with reality itself, and reality is not what we dream it to be.

“In reality we find the tragic meaning of existence itself, its conflicts, its imperfection. It is necessary to raise our eyes from the raw facts of our history and look for other points of view, to look for a greatness that is hidden in the insignificant, to be able to open up gaps for a deeper contemplation of that which has no answer.”

Update 09/26/2022 10:12 a.m.: This article has been updated to state that Bishop Paul Tighe will serve as secretary of the culture section of the new dicastery.