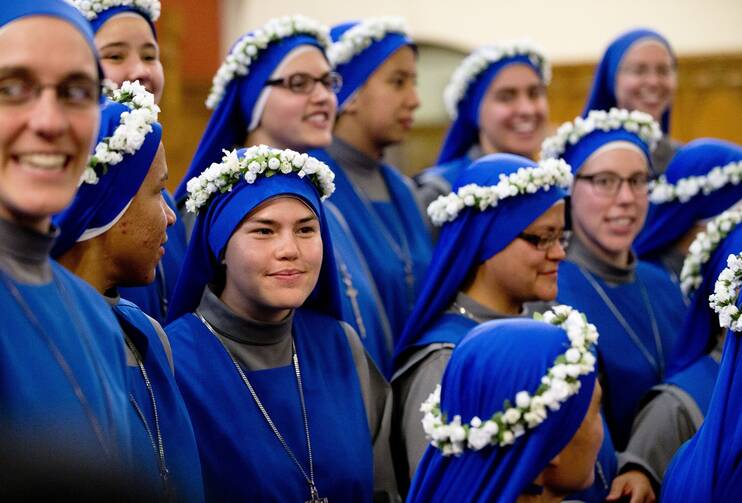 Sisters of the Servants of the Lord and the Virgin of Matara, an order founded in Argentina, are seen after the ceremony where they professed vows at Holy Comforter-St. Cyprian Catholic Church in Washington, D.C., on Nov. 1, 2017. (CNS photo/Tyler Orsburn)

When I left Vietnam to study in the United States, I was able to stay with the Dominican Sisters of Mary Immaculate Province in Houston before heading to Spring Hill College, a Jesuit school in Mobile, Ala. The province, which has grown to about 100 professed members, was founded in 1975 by sisters who had fled war-torn Vietnam.

Later, I learned that the Congregation of Dominican Sisters is just one of nearly 400 international religious institutes founded elsewhere that have extended their mission to the United States in recent decades. They have helped to change the demographics of religious life in the United States significantly.

New Faces, New Possibilities, a book of which I am a co-editor, discusses these increasingly common experiences at women’s religious institutes in the United States. Changing demographics call for a church that feels more relevant to an increasingly diverse Catholic population, and our religious institutes are responding with changes in their formation and governance structures.

Changing demographics call for a church that feels more relevant to an increasingly diverse Catholic population.

While previous generations of women religious came from largely white families whose European ancestors came to the United States in the 19th and early 20th centuries, new members of religious orders are increasingly the children or grandchildren of immigrants from Catholic countries outside of Europe, including Mexico, Nigeria, the Philippines and Vietnam. They come from families in which devotional practices and religious engagement are often more visible than in families who have long been in the United States, and these practices are winfluential in their vocational discernment.

The increased diversity in U.S. religious life can be seen in a comparison of fully professed members of religious institutes with those still in formation. Over the last decade, about seven in 10 members in formation have been white, compared with nearly nine in 10 members who have professed perpetual vows. Women religious of color make up 13 percent of the full members, but they make up three in 10 among members in formation, which means that women of color will make up an increasing share of sisters at religious institutes. Many of these new members are not native English speakers; there are dozens of different languages spoken among them, most commonly Spanish and Vietnamese.

New members of religious orders are increasingly the children or grandchildren of immigrants from Catholic countries outside of Europe, including Mexico, Nigeria, the Philippines and Vietnam.

In addition, there are sisters ministering and studying at international institutes that, starting in the mid-1960s, have established missions in the United States. Some institutes come here to escape persecution in their home country, like the Dominican Sisters from Vietnam. Others come to minister to immigrants from their homeland, as did many sisters who came from Europe in the 19th and early 20th centuries. Still others arrive with a desire to evangelize American culture, which they see as worldly, materialistic and lacking in spirituality. All have contributed to the changes in the demographics of religious life in the United States.

Some international religious institutes come to evangelize American culture, which they see as worldly, materialistic and lacking in spirituality.

In many ways, this cultural shift in religious institutes’ membership and leadership resembles the period when Irish and Italian institutes established missions in the United States. But today it is increasingly likely that the majority of an institute’s membership will hail instead from India or Kenya.

This feeling was affirmed on one occasion during my doctoral studies, when I attended a Mass celebrating vows at a women’s religious institute in the Midwest and was surprised to see that a sister from Vietnam was the provincial superior receiving the vows of their new members. Wearing petite-size clothing and speaking English with an accent, she was leading a province of relatively young and mostly white members. I thought, “What a day of joyful celebration!” 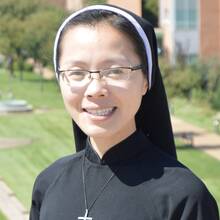 Thu Do, L.H.C., a member of the Sisters of the Lovers of the Holy Cross of Hanoi, is a research associate at the Center for Applied Research in the Apostolate, Georgetown University. She is the co-editor, with Thomas P. Gaunt, S.J., of New Faces, New Possibilities: Cultural Diversity and Structural Change in Institutes of Women Religious, published by Liturgical Press.