Pope Francis in Kazakhstan: ‘How many deaths will it take’ for peace to prevail in Ukraine? 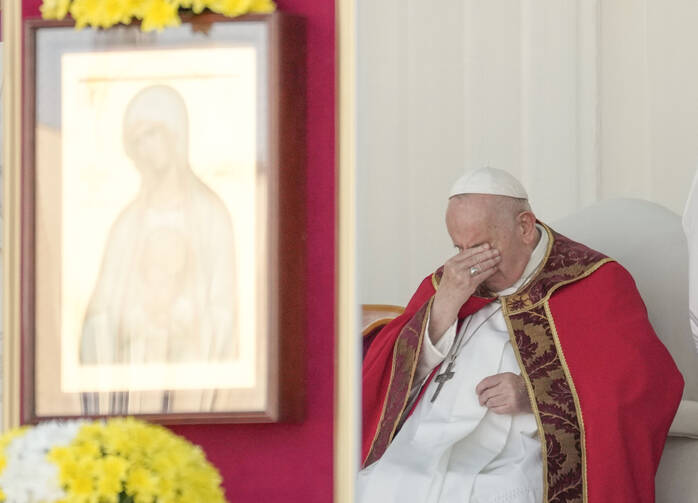 Pope Francis presides over a Mass at the Expo Grounds in Nur-Sultan, Kazakhstan, Wednesday, Sep. 14, 2022. Pope Francis is on the second day of his three-day trip to Kazakhstan.(AP Photo/Andrew Medichini)

NUR-SULTAN, Kazakhstan (AP) — Pope Francis told the Russian Orthodox hierarchy and other faith leaders Wednesday that religion must never be used to justify the “evil” of war, and asked at an outdoor Mass in Kazakhstan, “How many deaths will it take?” for peace to prevail in Ukraine.

An increasingly frail Francis made the appeal during his first full day in the former Soviet republic of Kazakhstan, where he opened a global interfaith conference and ministered to the tiny Catholic community in the majority Muslim country.

In the conference audience of imams, patriarchs, rabbis and muftis was Metropolitan Anthony, in charge of foreign relations for the Russian Orthodox Church, which has firmly backed Russia’s invasion of Ukraine. His boss, Patriarch Kirill, was supposed to have participated in the congress but canceled last month.

Pope Francis told the Russian Orthodox hierarchy and other faith leaders Wednesday that religion must never be used to justify the “evil” of war.

Kirill has supported Russia’s invasion on spiritual and ideological grounds, calling it a “metaphysical” battle with the West. He has blessed Russian soldiers going into war and invoked the idea that Russians and Ukrainians are one people.

Francis didn’t mention Russia or Ukraine in his remarks to the Kazakh conference. But he insisted that faith leaders themselves must take the lead in promoting a culture of peace, since it would be hypocritical to expect that non-believers would promote peace if religious leaders don’t.

“If the creator, to whom we have devoted our lives, is the author of human life, how can we who call ourselves believers consent to the destruction of that life?” he asked. “Mindful of the wrongs and errors of the past, let us unite our efforts to ensure that the Almighty will never again be held hostage to the human thirst for power.”

Francis then laid down a challenge to all those in the room to commit themselves to resolving disputes through dialogue and negotiation, not with arms.

Francis didn’t mention Russia or Ukraine in his remarks to the Kazakh conference. But he insisted that faith leaders themselves must take the lead in promoting a culture of peace.

He made the appeal more explicit in an afternoon outdoor Mass for Kazakhstan’s tiny Catholic community, in which he asked for prayers for “beloved Ukraine.”

“How many deaths will it still take before conflict yields to dialogue for the good of people, nations and all humanity?” he asked. “The one solution is peace and the only way to arrive at peace is through dialogue.”

Kirill sent a message to the congress read aloud by Anthony. In it, the Russian patriarch didn’t refer to the war but in general to problems over the past two decades caused by “attempts to build a world without relying on moral values.”

“How many deaths will it still take before conflict yields to dialogue for the good of people, nations and all humanity?”

The Russian patriarch has blasted the West’s secular mentality and claimed the seeds of the Ukraine conflict were sown by foreign threats to Russia’s borders. He has depicted the conflict as a struggle against a foreign liberal establishment purportedly demanding countries hold “gay parades” as the price of admission to a world of excess consumption and freedom.

“These attempts have led not only to the loss of the concept of justice in international relations, but also to brutal confrontation, military conflicts, the spread of terrorism and extremism in different parts of the world,” Kirill said in his message.

Suggesting he felt Russia was the victim of a smear campaign, he denounced the spread of misinformation and the “distortion of historical facts” and “manipulation of mass consciousness” to spread messages of “hatred towards entire peoples, cultures and religions.”

In addition to the Russian Orthodox delegation, the religious leaders included Sheikh Ahmed al-Tayeb, the grand imam of Al-Azhar, the seat of Sunni learning in Cairo, who warmly greeted Francis with a kiss on the cheek when the pope arrived in a wheelchair.

Al-Tayeb used his speech to the conference to complain that traditional religions had been replaced by a culture of lust and gay marriage. “This is not acceptable, not even for animals and beasts, let alone for people with pure hearts and sound minds,” he said.

The Right Rev. Jo Bailey Wells, the Anglican bishop of Dorking and one of only a half dozen women heading delegations, lamented that women represent half the world’s population but are hardly represented in religious leadership.

“My expectation is it will be a challenge to those present to empower women in the family context and in public society,” she told reporters.

Before Kirill bowed out, there had been speculation that Francis could meet with Kirill on the sidelines of the congress. The two met for the first time in 2016 in Cuba — the first-ever meeting of a pope and Russian patriarch — and spoke by videoconference in the early weeks of the war.

Speaking to reporters after he met with Francis, Anthony said Francis’ “altar boy” comment didn’t go over well in Moscow. “It wasn’t expected and clearly it’s not useful for the unity of Christians,” he said. “It was a surprise. But we know we have to move on.”

He said a Kirill-Francis meeting is still possible, but insisted it had to be well-prepared ahead of time and must produce a concrete joint statement, as was issued after the Havana meeting.

In addition to the meeting with Anthony, Francis also was meeting with al-Tayeb, the head of Russia’s religious council of Muslims and other Orthodox, Jewish, Lutheran and Muslim leaders.

Another visitor in Kazakhstan on Wednesday was apparently not on Francis’ agenda. Chinese President Xi Jinping arrived in Nur-Sultan on his first state visit outside China since early in the coronavirus pandemic. Vatican and Kazakh officials said they didn’t expect Xi would meet with the pope during his brief visit to a key economic and political ally in the region.