Pronouns, uniforms and bathrooms: How Catholic schools are facing questions of gender identity 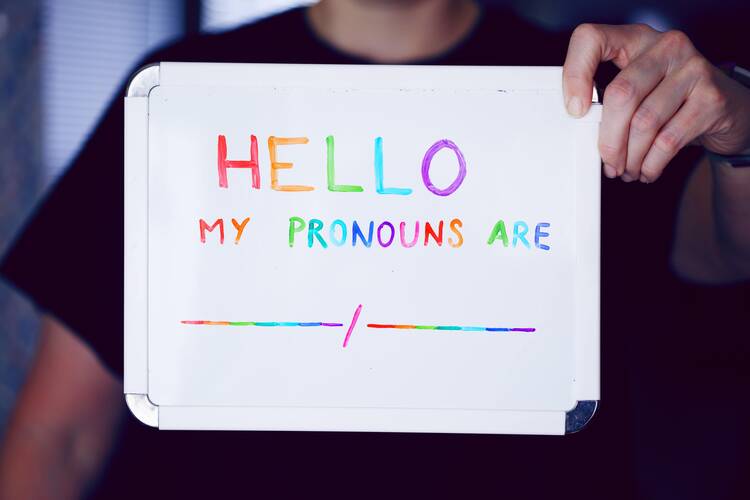 Photo by Alexander Grey on

Several Catholic school districts throughout the United States are grappling with changes around gender identity, and in some systems, students and staff are now subject to new policies about gender. Church leaders say they are simply affirming existing teaching, but some critics argue they penalize children who already face many challenges.

Covering a range of topics, from the use of pronouns to uniforms, the policies seek to clarify what is acceptable when it comes to gender identity and expression. They come on the heels of a 2019 letter from the Vatican’s education office that states parents have the right to enroll their children in schools that adhere to their views on human sexuality but also calls for dialogue around sensitive issues.

The policies are the latest challenge for Catholic institutions adapting to rapid advancements for L.G.B.T. rights.

Church leaders say they are simply affirming existing teaching, but some critics argue they penalize children who already face many challenges.

Leaders in the Archdiocese of Omaha, for example, recently announced a new policy for this school year that states students and staff at its schools must use pronouns and wear uniforms that correspond to their biological sex. But following an outcry from parents and activists, church leaders there said last week that they would delay implementation.

With about 19,000 students enrolled at its 70 schools, the archdiocese had said it would deny admission to transgender children if their parents or guardians challenged the policy on gender identity, which covers pronouns, participation in sports and the use of hormone therapy, according to the Omaha World Herald.

But some parents expressed concern after the policy was announced.

"I think it's going to give the message to these children that there's something wrong with them," Melissa Wegner told KETV.

A few days later, the archdiocese announced it would postpone the rollout of the policy.

“After listening to recent feedback and questions from school administrators and members of school communities, we are delaying the implementation of the policy,” Archbishop George J. Lucas wrote in a letter to parents. “We will use feedback to draft revised norms that will be more clearly focused and will not compromise the teachings of Jesus Christ and the church.”

Archbishop Lucas wrote that “the thought that gender can be a matter of personal choice threatens the well-being of children and young people.”

The letter states that a new policy will be ready by the end of the academic year and included in the student handbook for the next school year.

Archbishop Lucas wrote that “the thought that gender can be a matter of personal choice threatens the well-being of children and young people.”

“It is incompatible with our Catholic faith and the mission of Jesus,” he added, and said that Catholic schools could not assist parents in helping their children transition. He said that parishes “may be better equipped to accompany the family outside of the school setting.”

In Wisconsin, students who attend schools in the Archdiocese of Milwaukee and the Diocese of Green Bay are now subject to new policies around gender identity.

In Green Bay, a student’s biological sex will determine which locker rooms and bathrooms they use, and the new policies state that any student or parent who shows “open hostility toward, or defiance of, Church teaching, or who otherwise intentionally violate this policy, may be expelled from the school pursuant to this policy.”

The Milwaukee policy states that no individual associated with the school is allowed to state their preferred pronouns in either speech or writing, because that practice “promotes an acceptance of the separability of biological sex and ‘gender’ and thus opposes the truth of our sexual unity,” the Milwaukee Journal-Sentinel reported earlier this month.

Pete Burds, who works for the Archdiocese of Milwaukee’s evangelization office, told the Catholic Herald that his office plans to create resources for people with questions about their gender identity.

According to Burds, his office will provide “training for how to pastorally walk with someone who is experiencing gender dysphoria, local counseling options (counselors who are aligned with the catechesis/policy put forth by the archbishop), and pastoral guidance for the variety of complex situations that may come forward,” he said.

The parent of a transgender child who once attended a Catholic school in the diocese said he found the policy troubling.

A policy published earlier this summer by the Diocese of Sioux Falls, in South Dakota, goes further than some other dioceses, discouraging students and staff from saying the word gay and stating that they should use “same-sex attraction” instead.

“Students may not advocate, celebrate, or express same-sex attraction in such a way as to cause confusion or distraction in the context of Catholic school classes, activities, or events,” the policy states.

As for students who identify as transgender, they are not to be admitted or allowed to continue to attend Catholic schools in Sioux Falls, as their presence, the policy states, could be “the cause of confusion of or disruption to other students in the Catholic school system.”

The policy also applies to parish life and prohibits those who “choose to live a transgender lifestyle publicly” from serving as lectors or distributing communion.

The parent of a transgender child who once attended a Catholic school in the diocese said he found the policy troubling.

And students at a Catholic school in Louisiana are urging administrators to reconsider a policy that the diocese says is not new, but instead reflects existing church teaching.

Some Catholics applaud the Vatican directive and the changes that followed its publication.

“We ask that the policy be repealed and that students be allowed to use pronouns, names, uniforms and facilities according to their gender identity,” a group of alumni from St. Thomas More Catholic High School in Lafayette, La., said in a statement.

The policy changes enacted for this school year are in line with policies implemented in several other dioceses over the last couple of years, including at schools in Arlington, Va.; Hartford, Conn.; and the Twin Cities in Minnesota.

They follow guidance issued by the Vatican’s education office in 2019.

In a 28-page document titled, “Male and Female He Created Them: Towards a Path of Dialogue on the Question of Gender Theory in Education,” the Congregation for Catholic Education calls for greater dialogue between Catholic educators and those with a different view of gender and sexuality. But it also denounces the notion that gender can be separated from biology and states that parents have a right to enroll their children in schools that respect their own beliefs around “anthropology.” The document calls on Catholic schools to “provide [themselves] with organizational structures and didactic programmes that ensure these parental rights are fully and concretely respected.”

Some Catholics applaud the Vatican directive and the changes that followed its publication.

The head of the U.S. bishops education committee, Bishop Thomas A. Daly, told the Catholic news site Crux that Catholic schools should not be afraid of presenting some teachings, including on gender, as “non-negotiables in Catholic schools.”

“People don’t have to go to our schools, and this is not something that is a minor issue. It’s something we can’t shy away from,” Bishop Daly said. “I think we try to understand, but when it’s all said and done we as Catholic schools have a mission that is given to us by the church and we have to be faithful to it.”

“Catholic educators must be prepared with responses that are clear and consistent, upholding Church teaching.”

An editorial in Our Sunday Visitor argued that the new policies offer a valuable service to educators at Catholic schools, by presenting church teaching in clear language that can be used in sensitive situations.

“Catholic schools owe it to their students and the parents of their students to prepare transparent policies that they can consistently administer. Well-crafted policies will insist on using Christian language so as not to muddy the waters of debate by adopting loaded ideological terms,” the editorial reads. “Teachers—many of whom may be only recently arriving in Catholic schools—need clear policies to form their own classroom approach in order for them to be effective evangelical guides for their students.”

While some Catholic school systems are tightening the rules when it comes to gender identity, at least a few Catholic colleges and universities are enacting guidelines aimed at creating more welcoming spaces for the L.G.B.T. community.

This guide follows a decision in the spring to allow “all faculty, staff, and students to enter chosen first name and personal pronouns” into school online applications.

Villanova’s assistant vice president of communications, Jonathan Gust, told the Washington Examiner that the school stands by its new guidelines, even after critics condemned the policies.

“Calling someone by their name and pronouns is a show of respect for them as a person and fellow Villanovan,” Mr. Gust said.

Loyola Marymount University in Los Angeles took similar steps with its Chosen Name Project last September, which allows students to edit their name and pronouns in the school’s web service.

And at DePaul University in Chicago, the largest Catholic university in the country, administrators added a slate of inclusive pronoun options to its online portals in January.

Christopher Parker, an O’Hare Fellow at America, contributed to this report.