Pope Francis beatifies John Paul I, the ‘smiling pope’ who governed the church for 33 days in 1978 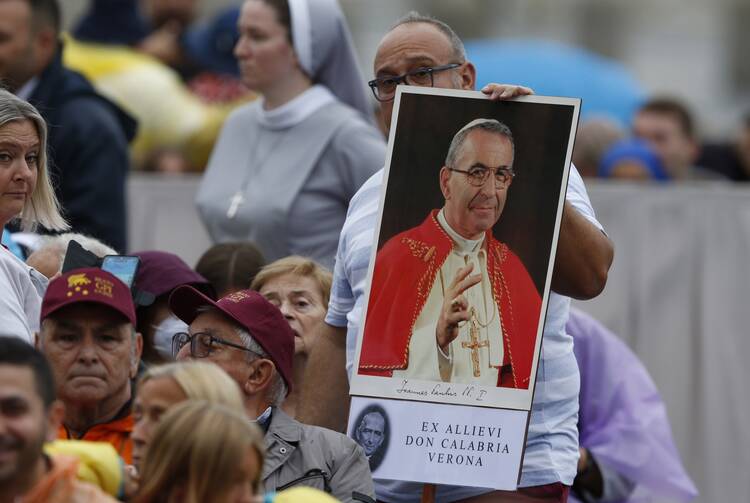 The rain poured down in Rome this Sunday morning, but the 25,000 Italians and pilgrims from many countries gathered in St. Peter’s Square were singing with joy as Pope Francis declared that John Paul I, who governed the church for a mere 33 days in 1978, is a “blessed” of the Catholic church and henceforth can be venerated as such by the faithful.

John Paul I was known as “the smiling pope” because he appeared always to exude the joy of the Gospel, and Francis recalled this characteristic of the last Italian pope in an inspiring homily when he said, “With a smile, Pope John Paul managed to communicate the goodness of the Lord.”

Reflecting on this trait, Francis remarked, “How beautiful is a church with a happy, serene and smiling face, that never closes doors, never hardens hearts, never complains or harbors resentment, does not grow angry or impatient, does not look dour or suffer nostalgia for the past.”

He added, “Let us pray to him [John Paul I], our father and our brother, and ask him to obtain for us “the smile of the soul.” Francis recited John Paul I’s own words: “Lord take me as I am, with my defects, with my shortcomings, but make me become what you want me to be.” That quote was from a homily John Paul I gave at a General Audience on Sept. 13, 1978, which was 15 days before his death.

Pope John Paul I: “Lord take me as I am, with my defects, with my shortcomings, but make me become what you want me to be.”

Thunder sounded, there were flashes of lighting, and rain poured down as Pope Francis arrived on the steps of St. Peter’s Square this morning, but the crowd, sheltered under multicolored umbrellas, cheered when they saw him. Nowadays, the pope does not normally preside at beatification ceremonies (he only does so for canonizations), but Francis made an exception for the last of a series of 45 Italian popes over 456 years.

The president of Italy, Sergio Mattarella, was among the congregation, as were the diplomatic corps and many cardinals and bishops who knew John Paul I, also known as “the people’s pope.”

Cardinal Benjamin Stella, who comes from the same Veneto region of Italy as John Paul I, was the postulator of the cause for his beatification and, following protocol, he read a brief biography of Albino Luciani (John Paul I’s name before he became pope), before Francis read the formula of beatification.

He recalled that Pope John XXIII, who convened the Second Vatican Council (1962-65), nominated him bishop and Pope Paul VI made him patriarch of Venice and later cardinal. He said that when he was elected pope, Cardinal Luciani took the name John Paul in honor of his two predecessors. He recalled that John Paul I’s coat of arms carried three stars representing the virtues of “faith, hope and charity” and also the word “humilitas,” meaning humility, another striking characteristic of the pope.

When the cardinal finished reading the brief biography of John Paul I, Pope Francis declared him a blessed of the Catholic church and authorized his veneration by the faithful. The Sistine Chapel Choir then sang “Alleluia,” and the veil was lifted from the portrait of John Paul I that was hanging from the central balcony of the basilica—the same balcony where on the afternoon of Aug. 26, 1978, John Paul I appeared for the first time as pope. The portrait, an oil painting made by the mainland Chinese artist Yan Zhang, was then unveiled for the world to see, and it drew warm applause from those present. (It was the first time that a Chinese artist has painted a portrait of a pope for such a ceremony.)

After the Gospel reading, Pope Francis delivered an inspiring homily, based on Chapter 14 of the Gospel according to St. Luke, on what the following of Christ (discipleship) entails. He told the congregation huddled under umbrellas, “To follow Jesus does not mean to become part of a court or a triumphal procession, or even to receive a lifetime insurance policy. On the contrary, it means ‘carrying one’s cross’ [Lk 14:27]: shouldering, like him, one’s own burdens and those of others, making one’s life a gift, spending it in imitation of his own generous and merciful love for us.”

He said, “These are decisions that engage the totality of our lives. For this reason, Jesus desires that his disciples prefer nothing to this love, even their deepest affections and greatest treasures. To do this, we need to look to him more than to ourselves, to learn how to love, and to learn this from the crucified one. In him, we see the love that bestows itself to the very end, without measure and without limits.”

Pope Francis recalled that John Paul I, at a Sunday Angelus on Sept. 10, 1978, said, “We are the objects of undying love on the part of God.” Francis added, “When we gaze upon the crucified Lord, we are called to the heights of that love, to be purified of our distorted ideas of God and of our self-absorption, and to love God and others, in church and society, including those who do not see things as we do, to love even our enemies. To love even at the cost of sacrifice, silence, misunderstanding, solitude, resistance and persecution.”

Pope Francis: “Our new Blessed [John Paul I] lived that way: in the joy of the Gospel, without compromises, loving to the very end.”

He recalled that at a General Audience on Sept. 28, 1978, on the eve of his death, John Paul said, if you want to kiss Jesus crucified, “you cannot help bending over the cross and letting yourself be pricked by a few thorns of the crown on the Lord’s head.” Francis said this reflection calls for “a love that perseveres to the end, thorns and all: no leaving things half done, no cutting corners, no fleeing difficulties.” He added, “Jesus asks us precisely this: Live the Gospel and you will live your life, not halfway but to the full. With no compromises.”

Francis concluded by saying, “our new Blessed [John Paul I] lived that way: in the joy of the Gospel, without compromises, loving to the very end. He embodied the poverty of the disciple, which is not only detachment from material goods, but also victory over the temptation to put oneself at the center, to seek one’s own glory. On the contrary, following the example of Jesus, he was a meek and humble pastor. He thought of himself as dust on which God deigned to write… and that is why he could say [at a General Audience on Sept. 6, 1978], ‘The Lord recommended it so much: be humble. Even if you have done great things, say: ‘We are useless servants.’”

At the end of the Mass at which he presided, and before driving among them in the popemobile, Francis again asked the crowd, and his global audience following on television, to pray for the martyred people of Ukraine, and for peace there.

[Read next: “Pope John Paul I will be beatified on Sunday. Who was he?”]