Pope Francis tells cardinals to serve with ‘wonder and gratitude’ 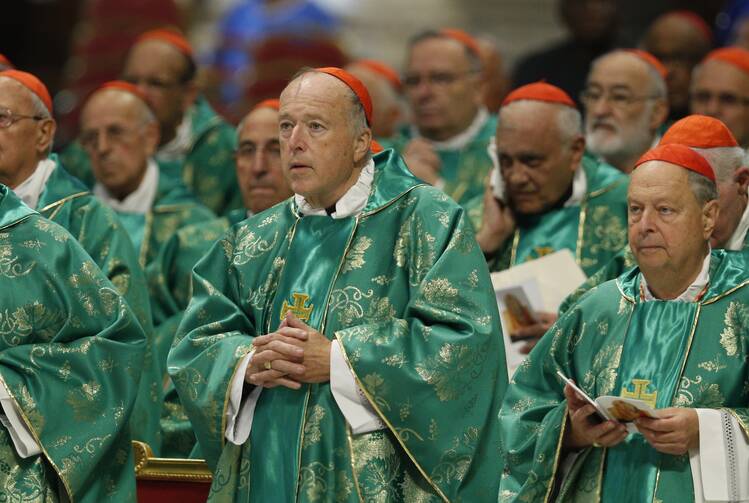 VATICAN CITY (CNS)—Jesus’ call to spread the Gospel should fill all Christians, especially those within the church hierarchy, with a sense of wonder and gratitude, Pope Francis said.

Celebrating Mass in St. Peter’s Basilica Aug. 30 with the College of Cardinals, the pope said this sense of wonder “sets us free from the temptation of thinking that we can ‘manage things.’”

“Today the church is big, it is solid, and we occupy eminent positions in its hierarchy. They call us ‘eminence,’” he told the cardinals and the estimated 4,500 people present. “There is some truth in this, but there is also much deception, whereby the father of lies seeks to make Christ’s followers first worldly, then innocuous.”

“They call us ‘eminence.’ There is some truth in this, but there is also much deception, whereby the father of lies seeks to make Christ’s followers first worldly, then innocuous.”

The votive Mass, offered “for the church,” was celebrated after the pope met with cardinals from around the world Aug. 29-30 to reflect on the apostolic constitution “Praedicate evangelium” (Preach the Gospel) on the reform of the Roman Curia.

“The work in language groups and exchanges in the hall provided an opportunity for free discussion on many aspects related to the document and the life of the church,” the Vatican said in a statement published Aug. 30.

The final session of the pope’s meeting with the cardinals, the statement said, was dedicated to the Jubilee Year in 2025.

Christians cannot only marvel “at the plan of salvation itself, but at the even more amazing fact that God calls us to share in this plan.”

In his homily at the Mass, the pope reflected on the first reading from St. Paul’s Letter to the Ephesians, in which the apostle praises God for revealing “the mystery of his purpose” and his “hidden plan” for humanity.

St. Paul’s hymn of praise, the pope said, is “born of wonder, a praise that will never become force of habit, as long as it remains rooted in wonder and nourished by that fundamental attitude of the heart and spirit.”

Recalling the Gospel reading from St. Matthew, in which Jesus sends his followers “to make disciples of all the nations,” Pope Francis said Christians cannot only marvel “at the plan of salvation itself, but at the even more amazing fact that God calls us to share in this plan.”

Christ’s promise that “I will be with you always to the end of time,” he said, “still has the power, even after 2,000 years, to thrill our hearts.”

Christians who are ministers of the church, Pope Francis said, are those who love the church and are ready to be at “the service of her mission wherever and however the Holy Spirit may choose.”

“We continue to marvel at the unfathomable divine decision to evangelize the whole world, starting with that ragtag group of disciples, some of whom—as the evangelist tells us—still doubted,” the pope said.

Nevertheless, he continued, the mystery “of our being blessed in Christ and of going forth with Christ into the world” should awaken in Christians the “wonder of being in the church.”

Addressing the 20 new cardinals, elevated in a consistory Aug. 27, the pope said the wonder of being chosen to spread the Gospel “does not diminish with the passing of the years,” nor does it “weaken with our increasing responsibilities in the church.”

“No, thanks be to God; it grows stronger and deeper. I am certain that this is also the case with you, dear brothers, who have now become members of the College of Cardinals,” he said.

Citing St. Paul’s VI’s encyclical letter on the church, “Ecclesiam Suam,” Pope Francis expressed gratitude to his predecessor, “who passed on to us this love for the church” and gratefulness for the “gift of our being not only members of the church, but involved in her life, sharing in and, indeed, jointly responsible for her.”

Christians who are ministers of the church, Pope Francis said, are those who love the church and are ready to be at “the service of her mission wherever and however the Holy Spirit may choose.”

“This was the case with the apostle St. Paul, as we see from his letters. His apostolic zeal and the concern for the community was always accompanied, and indeed preceded, by words of blessing filled with wonder and gratitude,” the pope said.