Will Pope Francis’ synod change the church? Our readers weigh in. 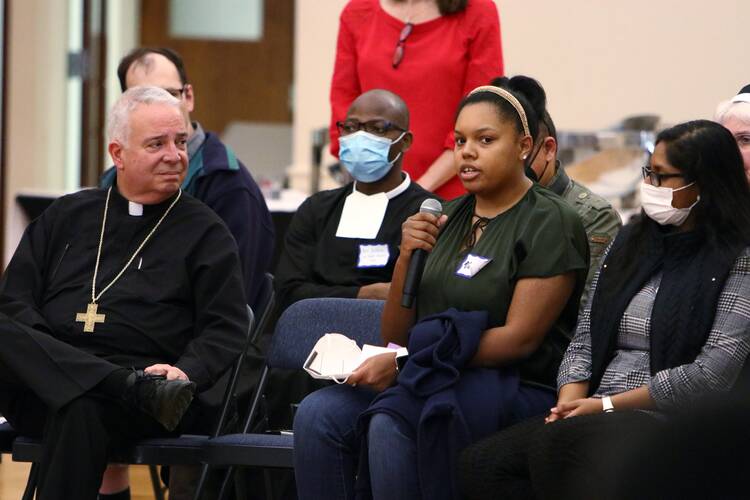 Bishop Robert W. McElroy of San Diego asked in the July/August issue of America whether synodality could “become a deeper element of Catholic life in the United States?” “Synodality is a process of conversion that requires nurturing and constancy,” wrote Bishop McElroy, who is to become a cardinal during a consistory in Rome on Aug. 27. “By adopting such a pathway, we will sustain the synodal impulse in our nation so that the fruits of the universal synod will enrich and build upon an already growing reality of synodal life.” The piece elicited many and varied responses from our readers. Here are some, edited for length and clarity.

I especially appreciated Bishop McElroy’s point about “humanizing truth.” Speaking as a queer Catholic, when I engage with other Catholics on L.G.B.T.Q. issues, the primary experience is one of dehumanization. I frequently see myself and people like me referred to in Catholic (and some mainstream) media as if we are just some sort of ideological issue rather than actual human beings. Often in these conversations, our experiences are discarded in favor of doctrine and theory. My hope and prayer for participants in the synod is that they are able to think about the church’s doctrine not just in terms of its theological underpinnings, but also in terms of its impact on actual people.
Nick Rizzuti

Synodality requires good shepherds who promote the Catechism of the Catholic Church, developed from 2,000 years of tradition. The German Synodal Way is on a pathway to schism because it is being led by bishops, priests and laity who have openly defied and denied the 2,000 years of dogmatic theology. We ought to recognize and distinguish between the human failings of the institutional leaders and the figures within it and the divinely protected aspects of the church—as revealed through Scripture and tradition.
Casey Patrick Augustine

In the Archdiocese of Seattle, from what I have seen and heard, nothing all that outrageous has happened during the synod. Yes, people are concerned about the church coverup of sex crimes. Yes, some think women should be ordained. But for the most part, Catholics, at least here in western Washington, seem to be pretty much “mainstream” Catholics. They express concerns for the future of the church in part because of the impact of Covid on Mass attendance. They are concerned about having enough money to keep a parish open. But overall, they have faith in God and believe we will all survive this and for the better.

What confounds me are the dioceses that are not endorsing or encouraging the synodal listening sessions. What do they fear? Every time something momentous happened in the Gospels, it seems like an angel was there to proclaim, “Do not be afraid.” Some of the prelates in this country need to take heed.
Stephen Healy

The reality is that the clergy are filtering and choking the synod process. Status quo. Power is a hard drug to kick.
Rick Landry

An invigorating and authentic vision; but in terms of implementation, it all depends on the diocese that you are in.
Michael Marchal

An in-depth presentation of the ideals of the synod’s intent. As stated simply by a prior person, it depends upon the bishop and each parish in a diocese. How many participated? What was sought and by whom and from whom? How on earth were the non-present contacted to learn why they have given up or never encouraged to begin with? While those involved spent long hours dedicated to the request, it depended upon the local bishop’s directive from the start.
Carl Kemmerer

Bishop McElroy helpfully emphasizes the importance of continuing this synodal engagement over the long term. Sticking with this discernment long enough so that it becomes a regular part of living the Gospel through distributed participation in decision making is and will remain a continuing challenge.
The Christoffersons

Thank you for answering the call. Thank you for this article. It gives me hope even though I am too well aware of the depth of the spiritual battle we are embroiled in. I compare it to the church being tempted by the devil to choose between the mind and heart of Jesus and those of John Wayne.
Christine Gall