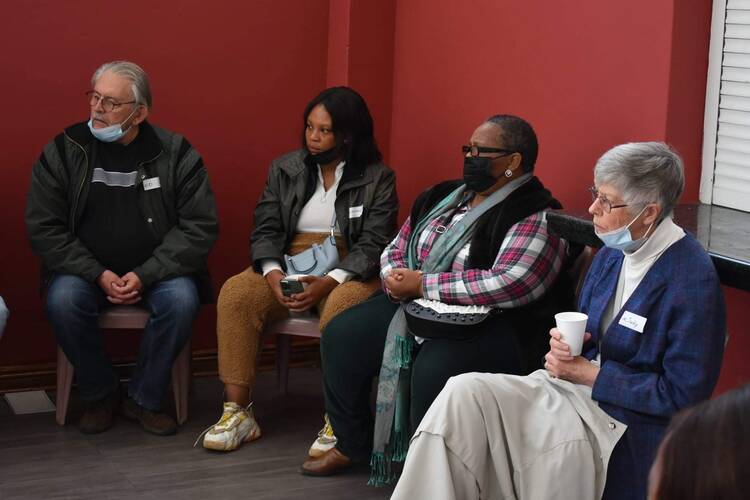 In South Africa the preparatory phase of the Synod on Synodality has been a hit-and-miss process. In some dioceses there were many opportunities to engage; in others, many parishioners said they had never heard of the synod.

When I asked South Africans on social media about their awareness of and participation in the synodal process, responses were varied.

A parishioner in a vibrant inner-city parish wrote: “Ours was very inclusive. We individually shared our thoughts…. Each ministry and group, including the youth groups, also met separately to share, discuss and submit their answers. It was a great experience of church in the catholic sense.”

One notable achievement of the synodal process was that many people who experienced themselves on the margins of the church felt that they were heard, especially those who had experienced sexual abuse in the church.

But a parishioner from a different South African diocese said: “I did not have the opportunity to contribute to the process. In our parish [we] had no meetings or gatherings at all.”

Yet another said: “Absolutely terrible. Disgraceful to say the least. In our parish we only had one meeting which I couldn’t attend and nothing after that.”

The episcopal vicar for evangelization in the Archdiocese of Johannesburg, Bruce Botha, S.J., said one notable achievement of the synodal process was that many people who experienced themselves on the margins of the church felt that they were heard, especially those who had experienced sexual abuse in the church.

In an emailed response, Father Botha said survivors of abuse reported that the synod’s listening circles helped them feel God’s presence and offered some healing. He said that those who participated were energized by the experience. Some laypeople, he said, have even requested that the listening circles become an ongoing feature of church life beyond the synod.

In several dioceses a few parishes eagerly set about establishing the recommended listening circles and encouraging dialogue, said Father Botha. In others, nothing was done and nobody heard a word about the process.

Father Botha found that many clerics acted like gatekeepers—they did not tell the laity about the synod or they sponsored a rudimentary process in which they only consulted a few people of their choosing.

“Absolutely terrible. Disgraceful to say the least. In our parish we only had one meeting which I couldn’t attend and nothing after that.”

“I have heard that some permanent deacons and parish priests have actively discouraged parishioners from participating in a ‘Jesuit’ synod, which could be referring to either Pope Francis or myself,” Father Botha said. He also heard “both within this diocese and in others across the country” that some clerics and laypeople were expressing unfounded concerns “that this synodal process is part of Pope Francis’ plan to ordain women and open up the church to gays and lesbians.”

“There are strong strands of conservatism, patriarchy and homophobia within the church in South Africa and, more broadly speaking, Africa,” Father Botha said.

In Johannesburg—South Africa’s biggest city—a report submitted to the Southern African Catholic Bishops’ Conference found that only 45 of the 128 parishes in the diocese participated in the synodal process—about 35 percent.

The secretary general of the bishops’ conference, the Rev. Hugh O’Connor, said a lack of resources was one of the limiting factors for some dioceses. A good number of dioceses in the conference are poor and struggling to survive. This made implementing a comprehensive diocesan synodal process difficult.

But one diocese with limited resources, Manzini—the only diocese in Eswatini, a small landlocked country within South Africa—set up a team that visited all the parishes in its mostly poor and rural area. “It was a wonderful experience to be part of this, and people were enthusiastic and responded well,” one member of the team said. “The bishop encouraged us and walked with us.”

Many clerics acted like gatekeepers—they did not tell the laity about the synod or they sponsored a rudimentary process in which they only consulted a few people of their choosing.

According to church officials I spoke to, engagement with the process was often easier in South Africa’s urban dioceses than its rural ones. English is not the first language in rural areas, so support material for the synod had to be translated into local languages. This was time-consuming and drained limited resources. The preparatory documents that came from Rome, some people indicated, were long, and the curial language was not always easy to work with.

It appears that in several South African dioceses, clergy engaged in the process more out of a sense of duty than conviction, said informed sources, who asked not to be identified because they were not authorized to comment on the synodal process. It is interesting to note how laypeople have been enthusiastic about conversations covering many facets of church life—there was openness to dialogue and sharing on thorny issues.

Some clergy, on the other hand, have shown little interest in opportunities for dialogue created by the synod and have resisted or even closed the door to some conversations. In one diocese, where I facilitated a workshop for both the clergy and laity on two separate occasions, the difference in energy and enthusiasm between the two groups was striking.

A summary of a report from one of the larger archdioceses noted: “It is unfortunate that there would appear to be a measure of apathy for the Synod 2023 among many of the priests of the Archdiocese and consequently the synodal process has had a slow start in most parishes. Some priests have shown complete indifference toward the entire process.”

There was also mixed reaction from bishops in southern Africa. Some bishops engaged extensively in the process, others appointed priests to “get on with it,” and some bishops did not give the process much attention at all.

Buti Tlhagale, O.M.I., archbishop of Johannesburg, took an active role in the synodal process. He came out strongly against patriarchy—a problem for both church and society in South Africa—and has expressed support for a women’s desk or department in the archdiocese to take the conversations that began as part of the process forward, according to Father Botha. The archbishop himself chose to highlight the need to talk about the place of ancestors and ancestral veneration in the African context.

The synodal process “demands that we share honestly what we believe even if the person listening to us strongly disagrees with us. We have to let go of the desire to convince others.”

There is often a tension between traditional African cultures, beliefs and the church. Many African people, for example, will get married in the church but also go through traditional marriage rites. Often the traditional wedding is done a long time before the church wedding.

Archbishop Tlhagale regularly argues—as was noted in “Africae Munus” (93)—that there is an absence of clearly delineated points of divergence and compatibility between Christianity and traditional religions. That leads to the challenge of “double affiliation.”

In African culture deference to authority remains a powerful reflex. People will often not be honest about what they really think. When a cleric, for example, says that something cannot or should not be discussed, people will remain silent. This is often the case when it comes to hot button issues like the role of women in the church, divorce and L.G.B.T.Q. issues.

According to the Johannesburg report, some women were reluctant to participate in the process for fear of retaliation by their parish priests. Members of the L.G.B.T.Q. community were hesitant to take part because they feared stigmatization.

The report adds that it “became obvious that the church many parishioners encountered was steeped in prejudice and patriarchy, the very opposite of the church envisioned by the people of the archdiocese in the 2019 synod. There was a certain discomfort and concomitant resistance to listening to people on the margins of the church.”

Some of the recurring themes that have emerged from the process in South African dioceses concern leadership, formation, catechesis, youth, liturgy and hospitality. Other major issues facing the country did not emerge as strongly as one might have thought. These include racism, economics, poverty and the sustainability of local churches.

Some women were reluctant to participate in the process for fear of retaliation by their parish priests. Members of the L.G.B.T.Q. community were hesitant to take part because they feared stigmatization.

Addressing the Archdiocese of Cape Town, Archbishop Stephen Brislin said that he “encourages us all to live synodality” and that “pastoral councils work on the outcomes of the listening circles for the life of the parish community.” He explained that this means not only working with the information gathered from voices already heard, but also continuing a process of listening.

In Johannesburg there was a strong call for clergy and parish pastoral councils to be transparent and to be held accountable. The report to the archdiocese states: “Nothing will change, nothing will get better, unless among other things the leadership of parishes are held accountable for their actions or lack of actions. Leadership in a parish consists not only of the parish priest but also deacons and laity.”

Reflecting on his experience of the synod process, Sean van Staden, S.J., a Jesuit scholastic studying in Zimbabwe, said: “My own experience is that true synodality is very difficult. It demands that we listen to others with an open heart, no matter how much we may disagree or be hurt by what others have to say.

“It demands that we share honestly what we believe even if the person listening to us strongly disagrees with us. We have to let go of the desire to convince others,” he said.

“I have witnessed how the synodal way of being church can rebuild broken communities and help people to become aware of the Holy Spirit at work in their midst.”

Father Botha thinks the genie of listening and consultation released by the process in South Africa cannot be put back in the bottle. He adds that recommendations made about formation of laity and holding both clergy and laity in leadership positions accountable for what they both do and fail to do has the potential to renew and revolutionize the local church.

But he worries that insights and observations that emerged from the people of God in the archdiocese may be diluted as they become synthesized into a report at the Bishops’ Conference and even further weakened at the continental level. “An image I use is trying to push water uphill,” he said. On the other hand, he added, because of the full support of Archbishop Tlhagale in Johannesburg at least, “regardless of what emerges at the conference level or continental level, our archdiocese will be implementing the recommendations made.”

@rpollittsj
Show Comments ()
Join the conversation: Login or create an account
Before you can comment, you need to update your profile to include your first and last name, as required in our comments policy. Then reload this page and you'll be set up for commenting. Update your profile