What should a retired pope do? Canon lawyers are proposing laws and guidelines 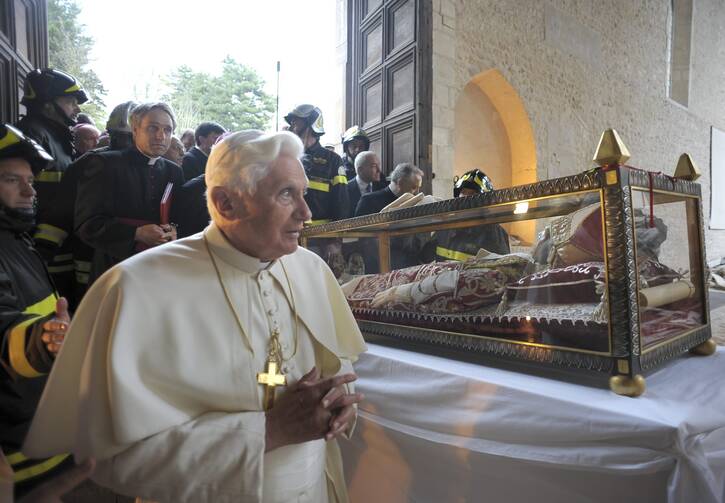 Pope Benedict XVI views the casket of St. Celestine V, a 13th-century pope who resigned, during his visit to the earthquake-damaged Basilica of Santa Maria di Collemaggio in L'Aquila, Italy, in this April 28, 2009, file photo. Pope Benedict retired in 2013. (CNS photo/L'Osservatore Romano via Reuters)

VATICAN CITY (CNS) — Pope Francis’ plans to visit the central Italian city of L’Aquila and its basilica Aug. 28 fueled speculation of a possible announcement of his resignation, which he has firmly denied.

L’Aquila’s basilica is the burial place of St. Celestine V, who issued a decree declaring the right of a pope to voluntarily resign, and then he did so in 1294. It was also where—on top of Pope Celestine’s glass casket—then-Pope Benedict XVI left his woolen pallium he had worn during his installation Mass—a gesture many wondered had been a sign of his resignation to come four years later.

In the more than 700 years that have passed since St. Celestine established this legal precedent, the right of a pope to resign remains ensured in church law.

The law is not very detailed, saying only that the decision must be made freely and “duly manifested,” and no one needs to formally accept a pope’s resignation for it to be valid.

That means nothing in canon law covers the legal status of a bishop of Rome who resigns from his office: What is his title, name, place of residence and means of support? What is his relationship with his successor, his role, responsibilities and powers in the church? And how is his funeral and burial to be carried out? These are just some of the questions canon lawyers would like answers to as part of their task of avoiding confusion, promoting unity and protecting the dignity and rights of a retired pope in the wings.

Nothing in canon law covers the legal status of a bishop of Rome who resigns from his office.

One canon lawyer and consultor of the Pontifical Council for Legislative Texts said the “obvious symbolism” of visiting L’Aquila would be the perfect opportunity for the pope to finally promulgate legislation needed to fill many gaps regarding a pope who resigns.

The canonist, Geraldina Boni, told Catholic News Service, “It is no longer inconceivable for a pope to resign, with this door having been ‘opened,’ as Francis himself has said several times.”

However, “this situation must be regulated” along with what to do when a pope is unable to govern the universal church when he is completely, permanently and irreversibly impeded or impaired because of a debilitating illness or other conditions, she said in an email response to questions in early August.

Boni is a professor of canon law at the University of Bologna’s prestigious “Alma Mater Studiorum.” She and other canonists launched a project in 2021 to draft legislative proposals that could be studied and discussed on an online platform with the aim of presenting the suggestions to “the supreme legislator,” the pope, for his consideration.

“It is no longer inconceivable for a pope to resign, with this door having been ‘opened,’ as Francis himself has said several times.”

The proposed norms can be found at progettocanonicosederomana.com with a proposed “apostolic constitution” to regulate an entirely impeded Roman See and one on the legal status or “canonical condition of the bishop of Rome who resigned his office.”

The church owes tremendous gratitude to the shepherd who, “moved by faith and love for Jesus Christ, decided to accept and carry out, maybe for many years, the hard and difficult burden of the Roman pontificate,” the proposal on resignations says.

Therefore, it says, “rather than binding prescriptions drawn out of the canonical legislation, these provisions mainly include some appropriate orientations that will have to be applied with caution,” and they are intended to be “especially respectful of the personal dignity” of the retired pope.

“Rather than binding prescriptions drawn out of the canonical legislation, these provisions mainly include some appropriate orientations that will have to be applied with caution.”

For example, the proposal says “the manifestation of the resignation must preferably be put into writing and ordinarily presented in a consistory of the College of Cardinals or in another way that makes it publicly knowable.”

Also, “the name of the one who resigned can be the same that he used during his office,” he “may use the white cassock that Roman pontiffs usually wear” and he may reside where he chooses, including Vatican City. The papal “fisherman’s ring” and the seal used to issue papal documents must also be destroyed, the proposal says.

But the biggest departure in the proposal from what Pope Benedict has done regards the retired pope’s title.

Instead of “pope emeritus,” the proposal says the retired pontiff “receives the title of bishop emeritus of Rome” and he “uses the ring that every bishop must wear.” Some photos of the retired pope show him wearing his gold cardinal’s ring.

Instead of “pope emeritus,” the proposal says the retired pontiff “receives the title of bishop emeritus of Rome” and he “uses the ring that every bishop must wear.”

The title, “pope emeritus,” has been a point of debate for some canonists, including Cardinal-designate Gianfranco Ghirlanda, a Jesuit theologian and canon lawyer who will be one of four new cardinals aged 80 or over Pope Francis will elevate Aug. 27 as a symbolic honor to thank him for his service to the church.

At a two-day congress on the historical and canonical aspects of a papal resignation, held in L’Aquila last December, Cardinal-designate Ghirlanda said, “Having two people with the title of ‘pope,’ even if one added ‘emeritus,’ it cannot be said that this might not generate confusion in public opinion.”

“Having two people with the title of ‘pope,’ even if one added ‘emeritus,’ it cannot be said that this might not generate confusion in public opinion.”

He said retired Pope Benedict has a “deeply spiritual and mystical” understanding of his papal election in that one may resign from the office and continue to “carry out a function that is also part of the Petrine ministry,” such as a dedication to prayer.

Even though he believes the retired pope did not intend to be making some kind of “dogmatic or canonical” statement with his title, the cardinal-designate said a canon lawyer has to look at “the practical consequences of a theoretical statement: What does this imply? What really happens?”

Theoretical assertions “cannot be valid,” he said, if they contradict “the purpose for which one has an institution in the church, particularly institutions of divine right,” he said. Such assertions “must be corrected or at least interpreted in such a way that they do not create misunderstandings and misinterpretations with serious repercussions for the life of the church.”

“The title ‘former Roman pontiff’ or ‘former supreme pontiff’ could also have been given” to indicate the person who resigned is no longer pope, he said.

Boni told CNS, “We will see if the work done by us university professors has been considered—even in criticizing it or departing from it-by the eventual drafters of any papal legislation.”

“Certainly the wide debate that has built up on the issue has helped dismantle a taboo that had no reason to exist,” she said.