It isn’t just the priest’s fault: Six tips for lay people for a better homily experience 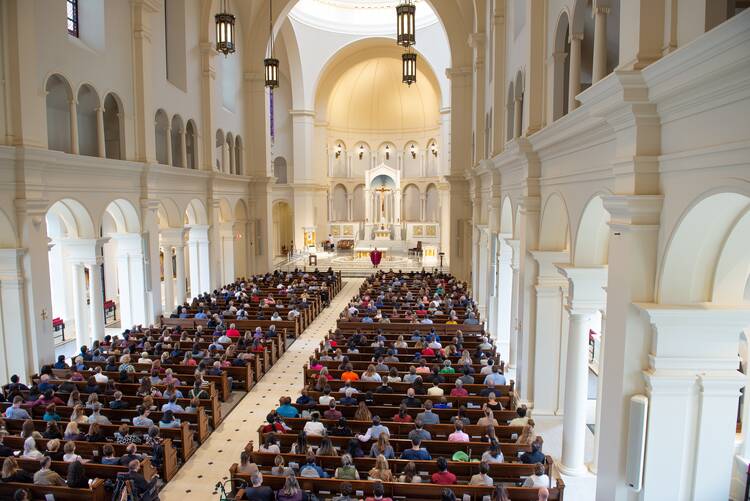 Media outlets frequently publish reports of new surveys, showing how dissatisfied Catholics are with their homilies. The approval ratings are always significantly lower than the parallel Protestant ones.

The primary persons to blame for this situation are Catholic preachers, and rightly so. Then the usual suspects are lined up as the causes of their poor performance: inadequate seminary training, insufficient preparation time, preachers being out of touch with the “real world” and unable to address women’s perspectives. These are real problems that need to be addressed.

But as these issues are discussed in the wake of each new survey, please permit a distinct perspective: Some of the blame for poor preaching in Catholic churches belongs to the people in the pews. Why? Because like any other form of communication, preaching is a two-way street. How a congregation responds to preaching affects how that homily is delivered; a congregation’s attitudes or openness also affects how ready they might be to hear and receive any good in the message offered.

With that in mind, here are concrete measures that you can employ to help improve the experience of your local homily, no matter who is preaching.

1. Look at the preacher. Even in large churches, the person preaching scans the faces of congregants. I find immediate encouragement comes from seeing faces turned towards me.

Keeping your eyes on the preacher also helps him to better read the room, if you will. Some groups are more responsive than others. Sometimes differences can be felt even among the crowds at the various Mass times at the same parish. Preachers’ expectations of how they will be received vary even if they are not explicitly conscious of them, and they often adjust accordingly. For example, if a crowd at a particular Mass tends not to be inclined to laugh, this may contribute to why your preacher rarely attempts to insert a little humor into homilies.

2. Do not read during the homily. It is hard not to view this as a way of silently screaming at the preacher, “I want nothing of this!” Why else would the bulletin or the hymnal suddenly become that interesting? Maybe you do indeed want to say, “I want nothing of this.” If so, it is better to make an appointment and explain your perspective to the priest or deacon directly. To the extent that I can, I have altered how I preach in response to negative comments. And the golden rule in the life of any parish is that negative comments should be directed to the person who can respond to them.

It should not need to be noted, but picking up your phone while another person is speaking is always rude. In and out of church. Period.

3. Sit still during the homily. There are many perfectly understandable reasons why you may need to move about during the homily. But try to imagine what it is like to speak to someone who gets up to leave as you begin. Again, perhaps this is the message that you want to send, but then do it in a kindly, more personable way.

But if you have read the readings before Mass or pay attention to them as they are proclaimed, you are more likely to recognize and to follow where your homilist is trying to go.

Even if it is obvious why you are moving—one child is in your arm, or you are heading toward the restroom—forgive the preacher if he needs a moment to adjust to the multitude of eyes that will follow you in and out of the worship space. Have you ever tried talking to oscillating eyes?

4. Comment on the homily. Whether what you say is positive or negative, you help the preacher to know what is being communicated. You need not offer a full critique. It is enough to say, “Good point about remembering the lonely.” “I’m not sure I would put it the way you did.” “It’s nice to hear about widows.” “Someday, could you please address immigration?”

Having taught university classes and preached for decades, I am still amazed that what I consider to be a minor point of a homily or lecture can become a major takeaway for someone else: good or bad. But hearing what another person makes of what I have said can profoundly alter my future presentations.

5. Read the Scriptures before Mass. The General Instruction on the Roman Missal says that the homily “is necessary for the nurturing of Christian life.” It instructs the preacher that the homily

should be an explanation of some aspect of the readings from Sacred Scripture or of another text from the Ordinary or the Proper of the Mass of the day and should take into account both the mystery being celebrated and the particular needs of the listeners.

In preparing homilies, Catholic preachers are taught to begin with the Scriptures of the day or the meaning of the feast being celebrated. If you, while listening from the pews, cannot find either of these thematic elements in the homily, you should say so.

Search for one sentence of the homily that is meaningful to you.

Homilists are not supposed to exegete the readings, and it would be foolish to attempt to address every meaningful aspect of them in one homily. But if you have read the readings before Mass or pay attention to them as they are proclaimed, you are more likely to recognize and to follow where your homilist is trying to go. Try this: Search for one sentence of the homily that is meaningful to you. Then let the rest go and choose to meditate on the part that worked for you.

6. All homilists have prompts that derail their thoughts. Try to keep this in mind.I remember a pastor who lost his concentration if he saw a man wearing a baseball cap in church. My train of thought can be derailed by spotting someone chewing gum at Mass. One weekend, I substituted in a parish with so many jaws moving, I began to think that I was St. Francis of Assisi, preaching to chomping cattle. For some it might be a crying child. (Though most preachers are ultimately glad to have crying children in their pews—it says that the church is alive.) Maybe it is side conversations among family members in the pews. Whatever it is, if your homilist happens to mention a trigger, keep it in mind.

The homily should be part of an active relationship between preacher and parish. None of us, speaking or listening, should stop trying to improve the experience. Revelation is not revelation unless it is received. All of us can help our preachers feel that they are talking to people who are listening. And those listening might get a little more out of it.