Interview: 3 points that were missing from Pope Francis’ apology in Canada 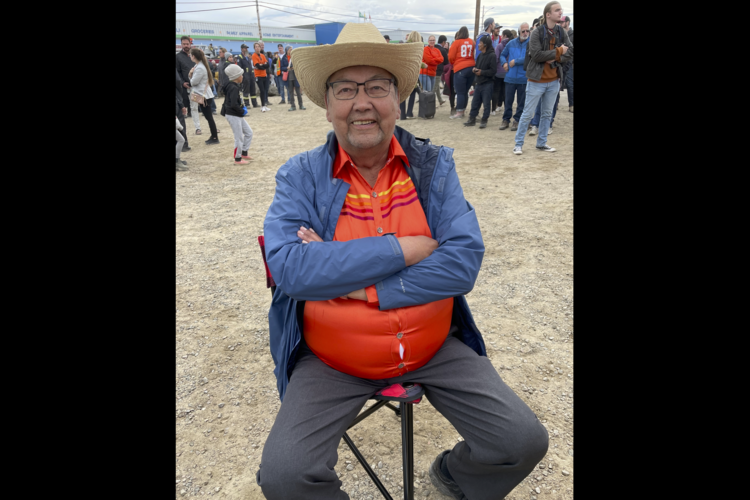 Many survivors of Canada’s residential school system, from the First Nations and Métis people, were present when Pope Francis met with the young people and elders of the Inuit nation on July 29 before returning to Rome. One of them was Gerry Desnomie, 74, from Saskatchewan, who came with his daughter, Tessa Cook. He traveled to Iqaluit with Archbishop Don Bolen as a member of the Truth and Reconciliation Commission of the Archdiocese of Regina.

Mr. Desnomie also attended the pope’s meeting at Maskwacis with the chiefs of the Indigenous Peoples and survivors on July 25, where Francis gave the first apology of his “penitential pilgrimage” in Canada. In an interview for America, I asked Mr. Desnomie to reflect on what the pope had said.

Our conversation has been edited for length, clarity and style.

What has struck you from Pope Francis’ “penitential pilgrimage” and apology to the Indigenous Peoples in Canada?

There were three points that really stuck out for me. First, he made a good apology and took some responsibility. But he missed the points on the “doctrine of discovery,” which totally gave Turtle Island [how some Indigenous People refer to the North American continent] to whoever claimed that it was European and Christian. He missed out there because we were human, we were civilized people; I thought [it was a] big mistake that he didn’t mention that.

The second thing I thought he missed was that he never mentioned anything about the unmarked graves we found at residential schools. There are many of them, but he never talked about it.

He never mentioned anything about the unmarked graves we found at residential schools. There are many of them, but he never talked about it.

And, thirdly, when he was talking about the abuses, he totally missed out the sexual abuse and holding those responsible for that accountable.

Although I thought it was a very good apology, as was his accepting responsibility for what happened, he missed out on those three points.

At Notre Dame Cathedral in Quebec he spoke about the abuse.

I wasn’t there last night; I didn’t hear that.

You are a survivor of the residential school system.

Yes, I was in the residential schools. I was also abused verbally, emotionally, sexually and so on.

What school were you at?

I was at [St. Paul’s Indian school in] Lebret, Saskatchewan, way back in the 1950s. I was there for five years, and then in another residential school for four more years. I was in residential schools for nine years in all.

How old were you when you first entered the residential school?

When I was taken from my home, I was just five years old. I was taken with my older sister. We were just two in the family then, and we were taken to the same school. But even though we were in the same school, we were not allowed to talk to each other or to visit one another!

You were five when you entered the residential school, what age were you when you came out?

I think I finally came out of the system when I was 18. You see, I wasn’t there the whole time. They built a day school on our reserve, so I went back home for a little bit.

Were you allowed to see your parents during the school year?

Well, I’m 74 years old. I don’t hold any resentment anymore. But I am not a practicing Catholic. I’ve kind of left that behind.

Could you see your sister at that same time?

I could see her in the hallway, but I couldn’t even talk to her. We were not allowed to talk to each other.

That expresses the brutality, inhumanity of the system.

It was the breakdown of the family.

Did your daughter, Teresa Cook, who is with you today, also go to residential schools?

She went afterward when it was taken over by the First Nations. She went there for a while, but she wasn’t in high school.

All this happened many years ago. What do you feel inside in yourself, in your heart, today?

Well, I’m 74 years old. I don’t hold any resentment anymore. But I am not a practicing Catholic. I’ve kind of left that behind.

So you were a Catholic first, as a child?

Do you blame the church enormously for what happened to you?

There are a couple of people in the church, and I really disliked them.

In your own heart: Are you at peace now?

I’m working with the bishop [Bolen] on truth and reconciliation. I know his heart, and that’s why I’m there with him.