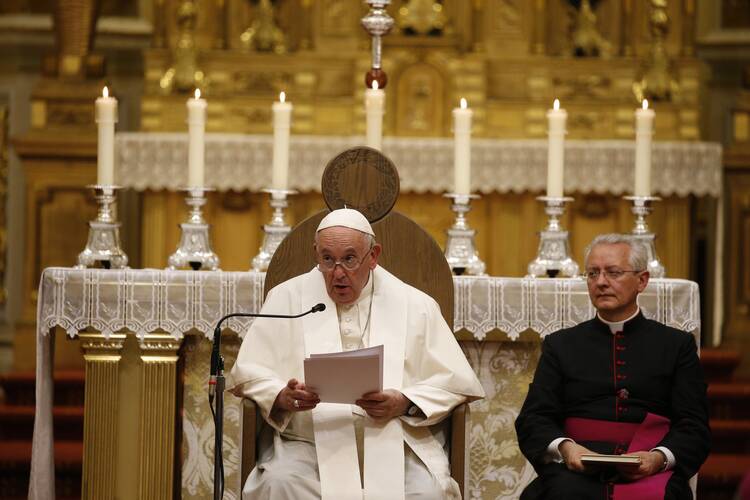 Pope Francis visited Quebec City for the second stage of his penitential pilgrimage to the Indigenous Peoples in Canada, July 27 to July 29.

Quebec has traditionally been the heartland of Catholicism in this vast country—second only to Russia in terms of surface area—with 38 million inhabitants, 44 percent of whom are Catholic. The welcome he received here was visibly warmer than that in Edmonton, where there were no crowds to greet him. From the moment he left Quebec’s international airport to drive to the archbishop’s residence in this city of some 800,000, thousands of people lined much of the route to greet him and receive his blessing.

That same evening around a thousand people, including many tourists, gathered in the Plains of Abraham and cheered when he drove among them in his popemobile, accompanied by Cardinal Gérald Lacroix, after his meeting with the country’s authorities at the governor general’s residence in the fortified Citadelle on top of the hill overlooking the city.

The next day, July 28, an estimated 15,000 according to local authorities gathered around the Basilica of St. Anne de Beaupré, the oldest church in North America, which is known for miraculous healings, when the pope went to celebrate Mass. A crowd also gathered outside the Cathedral of Notre Dame when he presided at Vespers later in the evening.

Pope Francis is aware of the demoralization among many clergy, women and men religious, and the lay faithful in this land, and during his sojourn here he has sought ways to encourage and inspire them.

Nevertheless, the number of people who turned out to greet him was very small compared to the quarter of a million that welcomed Pope John Paul II here in 1984. Although nearly all of the province’s 6.8 million French speakers have Catholic roots, fewer than 10 percent attend Mass regularly, compared with 90 percent several decades ago.

In 2003, there were 2,746 Catholic churches in Quebec. Since then 713 have been closed, demolished or converted, according to the Quebec Religious Heritage Council. Cardinal Gerald Lacroix of Quebec said last year the number of churches in the province is not sustainable.

“The number of new priests does not exceed 10 per year. This leads to a profound restructuring of parishes and dioceses,” said E.-Martin Meunier, a sociologist of religion at the University of Ottawa.

Canadians I have spoken to attributed the small crowds to a variety of reasons but above all to the sexual abuse of minors by clergy over more than three decades and to recent stories about unmarked graves of Indigenous children at church-run residential schools. Both scandals have seriously undermined the church’s credibility. Many are angry at the church in Canada; others have simply abandoned participation in church life due to other factors, including secularism. Furthermore, there was little time for the local church to prepare people for the visit, which seemed in doubt up to just three weeks ago.

Pope Francis: “I would like once more to ask forgiveness of all the victims. The pain and the shame we feel must become an occasion for conversion: Never again!”

Pope Francis is aware of the demoralization among many clergy, women and men religious, and the lay faithful in this land, and during his sojourn here he has sought ways to encourage and inspire them. He did so to an extent in his homily during the Mass for reconciliation at the Basilica of St. Anne de Beaupre on July 28 but above all in his talk at Quebec’s Notre Dame Cathedral that evening when he addressed some 1,000 or more bishops, clergy, women and men religious, seminarians and pastoral workers.

At the cathedral, Francis pointed the church in Canada onto a new path after being devastated by what he called “the evil perpetrated by some of its sons and daughters.”

In his homily, Pope Francis acknowledged the challenge of ministering in the wake of allegations about clerical sexual abuse and the abuses against Indigenous children at church-run residential schools but also the difficulties of sharing the Gospel in an increasingly secular society.

To proclaim the Gospel, the pope told them, “we must also be credible.”

Credibility, he said, comes from the witness of one’s life, from concretely demonstrating “the compassion that asks for nothing in return [and] the mercy that silently speaks of Christ.”

Speaking in Spanish, with accompanying translation in French and English—the two official languages of this country—he told them:

I think in particular of the sexual abuse of minors and vulnerable people, scandals that require firm action and an irreversible commitment. Together with you, I would like once more to ask forgiveness of all the victims. The pain and the shame we feel must become an occasion for conversion: Never again!

It was his first explicit reference to the abuse scandal, and significantly he extended his request for forgiveness “to all the victims.”

They listened in silence as he spoke but as soon as he finished speaking they gave him a rousing, prolonged standing ovation. His inspiring words had reached their hearts.