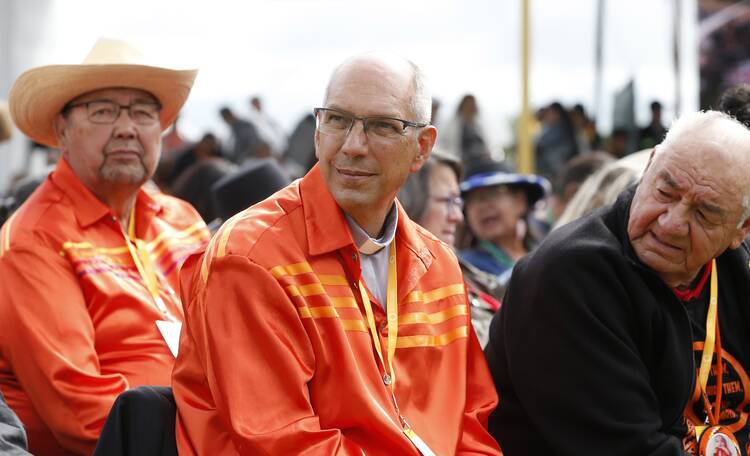 The Most Rev. Donald J. Bolen, archbishop of Regina, was one of the Canadian bishops who was deeply involved in the planning and preparation for Pope Francis’ historic visit to the Indigenous Peoples in Canada last week. He was also one of the six Canadian bishops who accompanied the delegations of Métis, Inuit and First Nations peoples who visited Pope Francis at the Vatican last March and April to share their stories of abuse at Canada’s largely church-run residential schools.

Archbishop Bolen attended all the major events that the pope was present at during his six-day visit in Canada and accompanied survivors to them, including to the final one at Iqaluit, on July 29, where Francis met survivors of residential schools and then addressed the young people and elders of the Inuit nation before boarding his flight to Rome.

I met the archbishop at Iqaluit and interviewed him for America as the visit was about to end. I began by asking him for his overall assessment of Pope Francis’ “penitential pilgrimage” to the 1.7 million Indigenous People of this multi-ethnic and multicultural country of 38 million inhabitants, 44 percent of whom are Catholic.

Our conversation has been edited for length, clarity and style.

What is your overall assessment of the pope’s visit to the Indigenous Peoples in Canada?

You’ve worked a lot with the survivors and with Indigenous groups over these years. What would you say has really come across most strongly to them from his visit?

In the first instance, the apology itself. It was so profound and heartfelt, and many have indicated that they have received that apology. When the chiefs went up to speak to the pope, several said, “We accept your apology.” Of course, not everybody. As you know, each survivor is at a particular place in their healing journey and has different experiences and perspectives at the outset. But the apology reached many, and we are at a different place than we were a week ago in the church’s walk with Indigenous Peoples, a better place.

The other thing that has come across is that we have a mission going forward, and we have much greater clarity about that, from the survivors and from the pope. That mission includes, firstly, being a church that tells the truth and is willing to look honestly at the past, to walk with and to accompany survivors, to assist them on their journey and in their efforts to tell their stories and in their efforts to heal.

“We are at a different place than we were a week ago in the church’s walk with Indigenous Peoples, a better place.”

As a church, we’ve really got a mission to be engaged with them in that regard. And then lastly, to be real allies in their efforts to maintain and strengthen their languages, to pass on their culture, traditions, spirituality, ceremonies, to next generations, and to allow those to be sources of strength in the community. I think on all those fronts, Pope Francis really supported what we’ve seen as requests coming from survivors.

What about the church’s relations with the government regarding Indigenous Peoples?

I think that we really appreciate the way that the government has supported this visit, and supported it financially. It let the church take the lead in organizing the events. I am appreciative of the way they have provided security for the events and assisted with funding for a number of other aspects of the visit.

Relations between the church and the government on Indigenous issues have been tense. The government has tended to be so critical of the church and, I think, not always taking its own responsibility. After all, these were government-funded schools, but the churches operated them. But when the pope spoke, I think, they didn’t feel judged harshly. So hopefully the good relations that were fostered in the preparation for this visit will continue.

You were in the Cathedral of Notre Dame in Quebec on July 28 when Francis spoke to the bishops, clergy, religious and seminarians. What struck you about what the pope said?

It was a beautiful address about a vision of church; a church that serves, a church that does not seek power, a church that engages in dialogue, that seeks encounter, that reaches out to people in need; a church that’s not afraid of living in a secular culture and doesn’t need to condemn the culture around it but to enter into dialogue and find creative ways to be faithful. And I was profoundly moved by the response of the congregation to the pope’s address. Of course, most of the gatherings where the pope has spoken have been gatherings principally with [residential school] survivors and Indigenous communities. But this was really a chance to speak to the clergy, the religious, the lay leaders and the bishops in our church.

The pope spoke, and obviously his courage was very much on display. Just the physical energy it takes to get out of his chair is so visible, such a visible sign of his determination. But the response of the congregation after his homily was quite extraordinary. There was such a huge outbreak of applause. And, I don’t know…maybe after 20 or 30 seconds the pope started signaling. First, he signaled that it was enough, but we didn’t stop. Then he signaled again that it was enough, but we didn’t stop. And then, with a little smirk on his face, he really signaled a third time that it was enough and then there was just an explosion of an ovation at that point. It was only when Cardinal [Gérald] Lacroix sat down that we settled down. It was such an outpouring of affection and support—support, I think, for his vision of church and for his personal courage and his willingness to help us at this time of need.

Last question: In your own heart, what do you take away from this visit which is now at an end?

I’m so grateful. For six years, I’ve been trying to work toward this visit, from the time that [the Truth and Reconciliation Commission’s] Call to Action 58 [calling for a papal apology for residential schools] was put out there [in 2015]. I talked to Indigenous People at that time, and they said: “This is really important to us. This would really help.”

So today there is a deep joy in my heart. Of course, not everybody is celebrating the visit, and not everybody is going to find healing in it, but so many are, so many are, and Pope Francis’ heart was fully on display for us, a heart which reaches out, full of compassion, a heart that speaks of Jesus’ mercy, of God’s mercy to the world. So the last word is profound gratitude for what we have lived, and hope going forward.