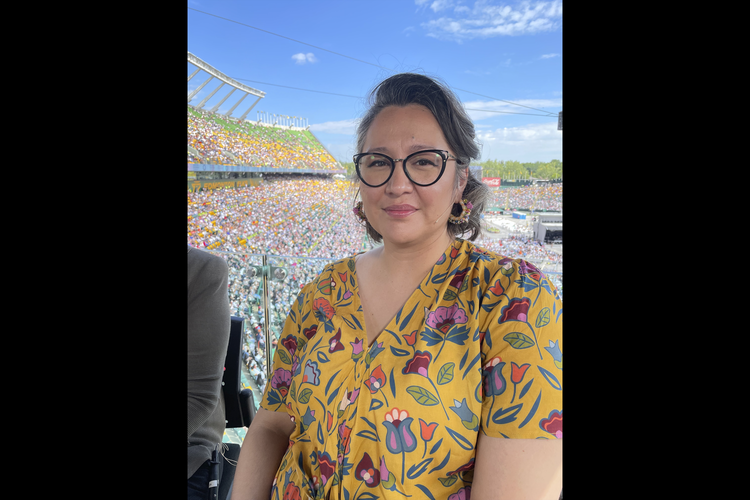 Mandy Gull-Masty, the grand chief of the Cree Nation Government in Quebec, at Commonwealth Stadium in Edmonton, Canada, where Pope Francis celebrated Mass on July 26 (Photo by Gerard O'Connell)

Many chiefs of Canada’s Indigenous Peoples have shared their reactions to Pope Francis’ apology on the first day of his “pilgrimage of penance,” from July 24 to July 29. One of those was Mandy Gull-Masty, the grand chief of the Cree Nation Government in Quebec and the first woman to hold this post.

In an exclusive interview with America in Edmonton on July 26, the day after the pope made his apology, she explained that “he is shining a light on that colonialistic mentality, and he is condemning it in his speeches. I think he is going to really awaken a lot here in Canada, for people that are maybe not aware of the history of Indigenous Peoples.” Beyond that, she emphasized the importance of hearing from survivors themselves going forward and supporting them with concrete action.

“I think he is going to really awaken a lot here in Canada, for people that are maybe not aware of the history of Indigenous Peoples.”

Ms. Gull-Masty was elected grand chief last year after serving for several years as deputy grand chief. Asked how she became the first woman to be elected grand chief, she recalled that originally theirs was a matriarchal society. “Hundreds of years ago, before we had anybody come to our territory, the role of the woman was very important. She was the one who coordinated and took the lead, making sure that everybody got from one camp location to another one. It was a very special role.”

But, she said, “unfortunately, with colonization…we became a very heavily male dominated government and organization for a very long time.” She rejoices to see things changing today and said, “I hope to see more women in leadership not only in my nation but across Canada.”

The following is the full text of the interview, edited for clarity and length.

You listened to the pope’s speech and you watched him [on June 25]. What is your overall conclusion?

I’m really looking at both sides of what happened. I sense that the actions of the pope were really trying to set a new direction, one that has been very different from the church’s position in the past. And I really felt that that must have been really hard for him, really challenging to come into such a heavy subject, and to take on that burden, that weight that he must have felt.

I sense that the actions of the pope were really trying to set a new direction, one that has been very different from the church’s position in the past.

At the same time, I don’t think I will ever forget the residential school survivors, how they felt, the silence, the crying, the screaming, just the emotion, the level of emotion, for those people who chose to be there. And I can’t help but think of those empty seats; those people who may not have been able to come, maybe were not ready to come. And especially those people who didn’t want to come—they’re not there.

As you listened to him effectively condemn the residential school system and condemn the association of the church with the colonial mentality, what did you think?

One of the things that I really appreciate is what he’s doing in his message. It’s that he is calling attention to something that has not been paid attention to ever. He is shining a light on that colonialistic mentality, and he is condemning it in his speeches. And I think he is going to really awaken a lot here in Canada, for people that are maybe not aware of the history of Indigenous Peoples.

Were you in a residential school?

My mom had a lot of emotional impact; she had a very hard time when she came out of school. And I think it affected us as intergenerational survivors.

What surprised you most in the pope’s speech?

When he spoke at the Mass [on Monday], and he talked about the grace of reconciliation, that really spoke to me, because he’s here delivering a really hard message and making statements on behalf of an institution that would represent something so hard. And for him to [ask] for forgiveness as part of his speeches—that’s a really important part. And I’m looking to hear what Indigenous People are saying when they respond to that.

Was there anything that struck you or that stood out in your mind?

I think when he spoke about the culture, that the eradication of culture was part of the institution of the school system and that he recognized that we’re still here, that our family bonds are so important, it really resonated with me that he recognized that. And that he said that he thought about us and that he remembered with shame and indignation the things that we shared with him in Rome. That he thought about that even after all this time, I felt that it was really a genuine statement and showed the burden that he felt in doing this important role.

You were part of an Indigenous delegation that went to Rome last March?

I was part of the First Nations delegation, right.

As a member of that delegation, you had a meeting with him in the Vatican. What memory did you carry away?

I remember just being so emotional for the residential school survivors when they shared their stories. And I remember just asking myself, He has probably never heard this story. I’d seen the statements that were put out about how surprised he was about what happened in Kamloops. So hearing it firsthand from the survivors, I was overwhelmed with emotion. And I just thought: What is it that he’s thinking? What are the next steps? For me, I was very nervous, too; it’s not everyday that you meet the pope when you’re a newly elected official, but it was a really big learning experience for me.

I just thought: What is it that he’s thinking? What are the next steps?

You saw him give back to the moccasins [given to him by the Indigenous delegation in Rome]. How important was that?

I think that for me, that was one of the most significant actions in the delegations’ trip, presenting those moccasins to the pope. It really called attention to those students who never returned home, students who lost their lives while they’re at school, students that we don’t know why they lost their lives, and especially students whose whereabouts are unknown. I think that he reflected on that. And the fact that he brought them back and made them a central part of his message [on June 25], I was very touched by that.

You met Francis in the Vatican. You have seen him here. What impression of the man remains in your mind?

I think humility, first of all, because I can’t imagine what it must be like—anywhere you go every single person wants to reach out to you, touch you, speak to you. And I observed him in the crowd yesterday taking those extra moments with people. So that really shows that he is somebody who wants to be on the level of the people and wants to understand what their burdens are. So I really appreciated that.

At what point are we going to see the opportunity for these students to take their abusers to court and to really find justice for what happened to them?

I think probably one of the more challenging things is to ask what are the next steps that are going to happen with the staff or members of the school; the actions that they took, the abuses that happened to the students. At what point are we going to see the opportunity for these students to take their abusers to court and to really find justice for what happened to them?

Are you satisfied so far with what he has said and done?

I am very surprised. I do think that it is a historic time. I’m pleased with the words that I hear, and that’s for me individually. I think my focus is really on the residential school survivors, looking to see what will be the next steps, how they’ll be supported. And I think with what we’ve seen so far from the pope, there’s an openness from him to really have that partnership working together, walking together, moving forward.

He’s encouraging, pushing the church in Canada to move in that direction. Isn’t he?

I think that was the sentiment that I really appreciated. Because, you know, the relationship with the church here in Canada has been a very challenging one. And the fact that he’s saying, “We need to showcase this compassion toward people.” Setting that tone is something that I especially appreciated during his presence here.