Pope Francis says he’ll slow down or retire: ‘You can change a pope’ 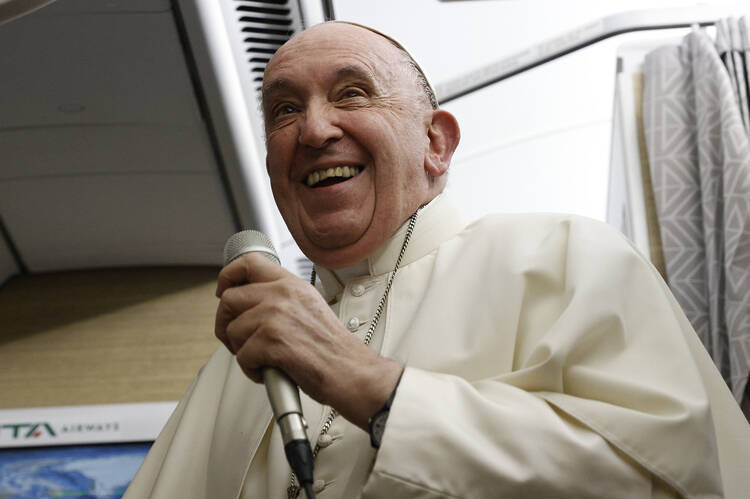 Pope Francis speaks to journalists aboard the papal flight back from Canada Saturday, July 30, 2022, where he paid a six-day pastoral visit. (Guglielmo Mangiapane/ Pool via AP)

ABOARD THE PAPAL PLANE (AP) — Pope Francis acknowledged Saturday that he can no longer travel like he used to because of his strained knee ligaments, saying his weeklong Canadian pilgrimage was “a bit of a test” that showed he needs to slow down and one day possibly retire.

Speaking to reporters while traveling home from northern Nunavut, the 85-year-old Francis stressed that he hadn’t thought about resigning but said “the door is open” and there was nothing wrong with a pope stepping down.

“It’s not strange. It’s not a catastrophe. You can change the pope,” he said while sitting in an airplane wheelchair during a 45-minute news conference.

Francis said that while he hadn’t considered resigning until now, he realizes he has to at least slow down.

“I think at my age and with these limitations, I have to save (my energy) to be able to serve the church, or on the contrary, think about the possibility of stepping aside,” he said.

“It’s not strange. It’s not a catastrophe. You can change the pope,” Pope Francis said while sitting in an airplane wheelchair during a 45-minute news conference.

Francis was peppered with questions about the future of his pontificate following the first trip in which he used a wheelchair, walker and cane to get around, sharply limiting his program and ability to mingle with crowds.

He strained his right knee ligaments earlier this year, and continuing laser and magnetic therapy forced him to cancel a trip to Africa that was scheduled for the first week of July.

The Canada trip was difficult, and featured several moments when Francis was clearly in pain as he maneuvered getting up and down from chairs.

At the end of his six-day tour, he appeared in good spirits and energetic, despite a long day traveling to the edge of the Arctic on Friday to again apologize to Indigenous peoples for the injustices they suffered in Canada’s church-run residential schools.

Francis ruled out having surgery on his knee, saying it would not necessarily help and noting “there are still traces” from the effects of having undergone more than six hours of anesthesia in July 2021 to remove 33 centimeters (13 inches) of his large intestine.

“I’ll try to continue to do the trips and be close to people because I think it’s a way of servicing, being close. But more than this, I can’t say,” he said Saturday.