Bishops must be good listeners, says nun at Vatican who helps select them 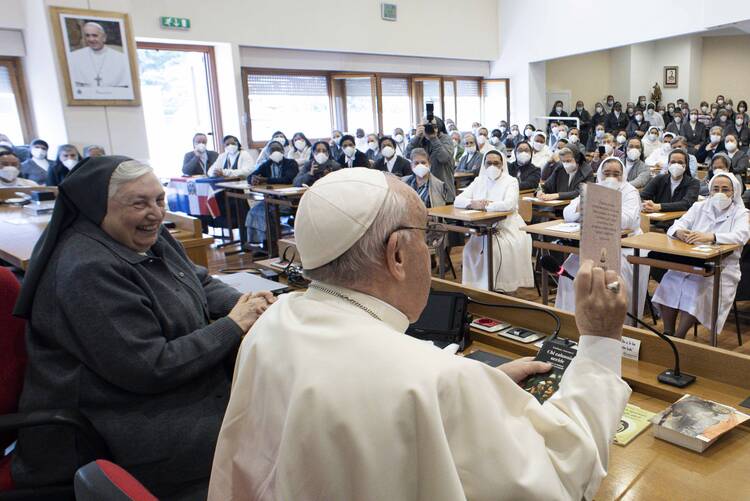 Sister Yvonne Reungoat, then superior of the Salesian Sisters, is pictured with Pope Francis during a meeting with members of the order in Rome in this Oct. 22, 2021, file photo. (CNS photo/Vatican Media)

VATICAN CITY (CNS)—While the perfect bishop does not exist, he does have to be a person who knows how to get others involved in the life of the church and to listen to everyone, including those with whom he may disagree, said a new member of the Dicastery for Bishops.

French Salesian Sister Yvonne Reungoat told Vida Nueva, a Spanish publication reporting news about the Catholic Church, that “the ideal bishop does not exist.” But he has to be a shepherd who is “close to the people entrusted to him, he has to know how to involve priests, laity and religious, and people of different generations.”

A bishop has “to know how to involve priests, laity and religious, and people of different generations.”

“The path of synodality” is essential for this process and “it must be the usual way of animating the church to favor collegiality,” she told the publication in an interview published online July 24.

Canadian Cardinal Marc Ouellet, who heads the dicastery, once told Vida Nueva that “30% of those chosen to be bishops reject the appointment.” The publication asked Sister Reungoat what might explain this situation.

“There may be a difficulty in accepting the responsibility of being bishop of a particular church, with all the joys, challenges and complaints that it entails,” she said.

“That is why I think that, to be a bishop, one must have the ability to listen, both to those who have the same ideas and to those who protest. Is not easy. Just think of the issue of abuse, which has marked the life of the church in various parts of the world in recent years,” she added.

“To be a bishop, one must have the ability to listen, both to those who have the same ideas and to those who protest. Is not easy.”

In mid-July, Pope Francis named 14 new members to the dicastery responsible for helping the pope choose bishops for Latin-rite dioceses outside of the church’s mission territories. For the first time ever, the members included women: two religious and one lay. Before Pope Francis’ reform of the Roman Curia took effect in June, members of the dicastery were only cardinals and a few bishops.

Members meet twice a month to review dossiers submitted by Vatican nuncios about potential candidates and to vote on the names they recommend to the pope.

Sister Reungoat, former superior general of her order, told Vida Nueva it is important for women to have a role in the naming of new bishops.

The presence of women in the dicastery will allow for views and a sensitivity or awareness that are both common among men and women and “complementary,” she said.

Women are more likely to be working very closely and have “direct contact” with people and situations “on the ground,” she said. “We have knowledge that starts from reality. This experience is also about listening and dialoguing with this reality.”

Having this “complementary vision” can help in getting “closer to reality, which is complex” and varied since bishops serve in different parts of the world, and the dicastery must study and discern much information coming from the different nunciatures, she said.

Seeing more women represented at high levels of the church may make women feel more involved, she said. However, having a woman in a particular position “does not mean that the situation will automatically change. There needs to be a reciprocal openness.”

It is a path that opens up by “walking together. We must give women their place, but we must also accept our position, because sometimes we back down because we think that we are not up to the task or that it does not concern us. We must also have the courage and simplicity to be ourselves to enter a path that is opening up,” Sister Reungoat said.