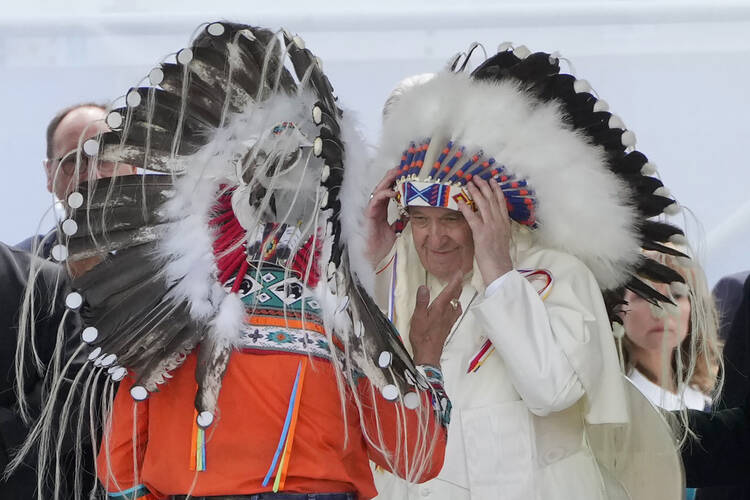 Pope Francis puts on an indigenous headdress during a meeting with indigenous communities, including First Nations, Metis and Inuit, at Our Lady of Seven Sorrows Catholic Church in Maskwacis, near Edmonton, Canada, Monday, July 25, 2022. (AP Photo/Gregorio Borgia)

In a historic apology, Pope Francis condemned Canada’s residential school system as “a deplorable evil” and asked forgiveness of the Indigenous Peoples for Christians participation in it.

“I am here because the first step of my penitential pilgrimage among you is that of again asking forgiveness, of telling you once more that I am deeply sorry,” the pope told the more than 2,000 Indigenous leaders and survivors that had come from all over the country, representing the 1.7 million members of Canada’s First Nations, Métis and Inuit peoples.

Speaking in Spanish, at Maskwacis, 60 miles from Edmonton near the site of Ermineskin—one of Canada’s largest residential schools—Pope Francis gave a historic, long awaited, unequivocal apology to these Indigenous Peoples. He condemned the entire system of “cultural destruction” and “forced assimilation” through the residential schools as “a deplorable evil” and “a disastrous error” that is “incompatible with the Gospel of Jesus Christ.”

“I am here because the first step of my penitential pilgrimage among you is that of again asking forgiveness, of telling you once more that I am deeply sorry.”

As he spoke, the Indigenous chiefs, survivors of the residential schools, were all gathered in a circle, under a covered setting, in the city’s Pow-Wow Park. Every year indigenous people gather here to dance, sing and celebrate their culture, but today they gathered for a most solemn moment that revived deep emotions, painful sorrowful memories.

But not all indigenous people want an apology. Some are deeply angry at the Catholic Church, which they hold partly responsible for cultural genocide. As we drove in from the airport yesterday, I saw protestors on a bridge with a banner that said, “No to an apology.” An RCMP officer (who did not want to be identified) told me, “Emotions are running very high, we are on maximum alert.” But the protests were few.

Many told me today’s gathering revived the saddest of all memories—those of “the missing children” who never returned home because they died at the schools. The Truth and Reconciliation Commission found that at least 15 had died here at the Ermineskin school, the only residential school Francis will visit during his stay here.

Francis, in his talk, put his hand into this extremely painful, open wound, by recalling that when their delegations visited him in the Vatican last March, they gave him “two pairs of moccasins as a sign of the suffering endured by indigenous children, particularly those who, unfortunately, never came back from the residential schools.” They asked him “to return the moccasins” when he came to Canada” and he did so when he finished speaking, a gesture that drew warm applause from the crowd.

Before doing so, however, he told his indigenous audience that the moccasins “over the past few months have keptalive my sense of sorrow, indignation and shame. The memory of those children is indeed painful.” At the same time, he said, “those moccasins also speak to us of a path to follow, a journey that we desire to make together. We want to walk together, to pray together and to work together, so that the sufferingsof the past can lead to a future of justice, healing and reconciliation.”

“In the face of this deplorable evil,” he told them, “the church kneels before God and implores his forgiveness for the sins of her children.”

In a particularly significant passage, Francis asked forgiveness for the ways in which many Christians, members of the Catholic Church and its religious communities, “supported the colonizing mentality of the powers that oppressed the indigenous peoples” and “cooperated, not least through indifference, in projects of cultural destruction and forced assimilation promoted by governments of that time, which culminated in the system of residential schools.”

He condemned the entire system as “a deplorable evil,” and said, “the overall effects of the policies linked to the residential schools were catastrophic. What our Christian faith tells us is that this was a disastrous error, incompatible with the Gospel of Jesus Christ.”

“In the face of this deplorable evil,” he told them, “the church kneels before God and implores his forgiveness for the sins of her children.”

He drew strong applause when he told them, “I myself wish to reaffirm this, with shame and unambiguously. I humbly beg forgiveness for the evil committed by so many Christians against the indigenous peoples.”

He emphasized that “begging pardon … is only the first step, the starting point,” there is also a need “to conduct a serious investigation into the facts of what took place in the past and to assist the survivors of the residential schools to experience healing from the traumas they suffered.”

He promised to “continue to encourage the efforts of all Catholics to support the indigenous peoples” and said, “my presence here and the commitment of the Canadian bishops are a testimony to our will to persevere on this path.”

He gave his apology after being welcomed by the greatly respected Chief Wilton Littlechild, a survivor of abuse at Ermineskin residential school and one of the three commissioners of the Truth and Reconciliation Commission who had listened to the painful testimonies of 70,000 survivors.

“The words you spoke to us in response clearly came from the depths of your heart and were for those who heard them a source of deep comfort and great encouragement.”

Chief Littlechild, who’s name in Cree “Usow Kihew” means “Golden Eagle,” praised Francis for making the long journey “to be with us on our land, and to walk with us on the path of reconciliation.” Referring to the pope’s mobility problems—Francis arrived in a wheelchair—he expressed “deep appreciation” for “the great personal effort you have made to travel to our land.”

He told him Canada “is the traditional homeland of the First Nations, Métis and Inuit Peoples” and said here in Maskwacis “we are on the ancestral territory of the Cree, Dene, Blackfoot, Saulteaux and Nakota Sioux people since time immemorial.”

He recalled that during the indigenous’ delegations visit to the Vatican last March and April, Francis had heard about “the abuse so many of our people have suffered” at residential schools. He said, “it was clear to us all that you listened deeply and with great compassion to the testimonies that told of the way our language was suppressed, our culture taken from us, our spirituality denigrated” and of “the devastation that followed from the way our families were torn apart.”

He told Francis, “The words you spoke to us in response clearly came from the depths of your heart and were for those who heard them a source of deep comfort and great encouragement.” He recalled that Francis had then expressed his intention “to visit with us on our land… to be close to us” and said “you have come… as you promised.”

He added, “You have said that you come as a pilgrim, seeking to walk together with us on the pathway of truth, justice, healing, reconciliation and hope. We gladly welcome you to join us on this journey.” He told him, “We sincerely hope that our encounter this morning, and the words you share with us, will echo with true healing and real hope throughout many generations to come.” He concluded in the Cree language—“Kitatamihin” (Thank you!), “Your Holiness. Welcome to our land.”

After driving 60 miles from Edmonton to Maskwacis, Francis opted to move around in a wheelchair as he did yesterday after disembarking from the plane. On arrival at this rural indigenous town of some 20,000 people, he first went in the wheelchair to the nearby cemetery for Indigenous Peoples, where 15 students of the Ermineskin residential school are believed to be buried, and prayed in silence there. Afterwards, he visited the site of the residential school, which was closed and pulled down in 1976, and proceeded from there in the wheelchair to the Pow Wow Park Grounds.

On his arrival at the park, he was treated to an impressive indigenous celebration. It began with the procession of the current and former chiefs, wearing colorful headdresses, with many carrying symbols of office. Then came the warriors, dressed with animal skins.

After that silence descended as they brought in a long red banner on which was written the names of the 4,000 missing children from the residential schools. The names were verified by the Truth and Reconciliation Commission, but it acknowledged there could be many more whose names are not known. The banner was first presented at the commission’s closing session in Ottawa in 2015 and has not been seen since. Its presence today was therefore highly significant. The parade closed with a dance performance by jingle dancers, in beautifully colored indigenous dresses.

Chief Littlechild then welcomed Francis, and afterwards the pope spoke in Spanish, with a translation read in English. Some in the crowd wept, some applauded, while others closed their eyes as they listened to the pope’s words.

The apology concluded with the pope returning the child-sized moccasins that were given to him at the Vatican meeting in March by Marie-Anne Day Walker-Pelletier, a retired chief of Okanese First Nation in Saskatchewan. The pope was also presented with a headdress to wear by Chief Wilton Littlechild following ceremonial signing and drumming.

Mandy Gull Masty, the Grand Chief of the Cree Nation of Quebec, told me that this was “a very significant moment, a moment of high honor, because not many people are given this honor.” She recalled that when the indigenous delegations visited Francis in the Vatican they gave him many kinds of presents, “but this is a really significant one, as was the reaction of the crowd who applauded, signaling that they highly appreciate the work Francis has done to bring healing and reconciliation between the Catholic church and the Indigenous Peoples.”

Lisa LaFlamme, the anchor of CTV—the most watched English television in Canada—remarked that “this was one of the most important days for the Catholic Church in Canada.”