‘I always pray with a rosary’: Inside Joe Biden’s personal pilgrimage to Bethlehem 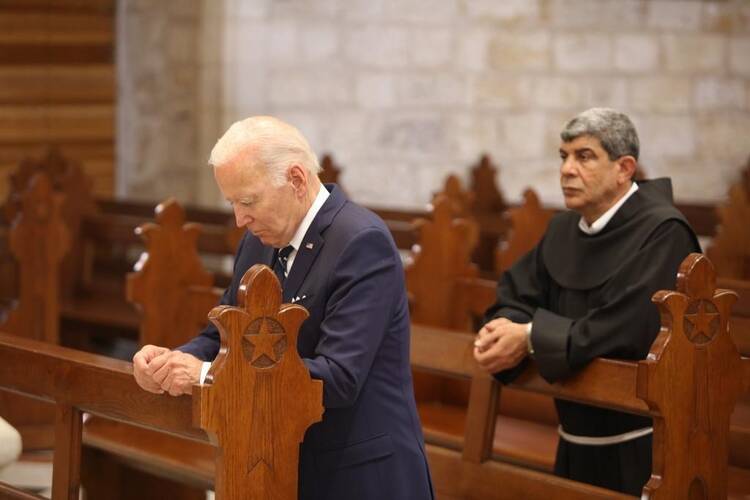 One part of President Joe Biden’s ultra-publicized trip to the Middle East took place in private, away from the eyes of any of the journalists who accompanied him on the five-day visit.

The president was accompanied only by a single Secret Service agent when, after meeting with Palestinian President Mahmoud Abbas in Bethlehem on July 15, he went on a personal pilgrimage to the complex containing the Basilica of the Nativity and the Church of Saint Catherine to pray.

The president was accompanied only by a single Secret Service agent when he went on a personal pilgrimage to the Basilica of the Nativity and the Church of Saint Catherine to pray.

Seeing a cluster of religious men at the reception, where they were representing various Jerusalem churches, including the Franciscan order and the Melchite, Greek Orthodox and Armenian churches, Mr. Biden walked over to greet them, Father Faltas said.

On Friday, July 15, at the end of his formal visit to the Palestinian Authority, Mr. Biden’s convoy headed toward Manger Square. Tourism Minister Rula Maayah welcomed him alongside church dignitaries, and the president stepped into the church, first taking in the Greek Orthodox section, accompanied by the Greek Orthodox patriarch, Theophilos III.

Then, alongside Patriarch Theophilos and the Custos of the Holy Land, Francesco Patton, O.F.M., Mr. Biden descended to the grotto, the underground cave in which Jesus was born, which has been a site of Christian worship since Roman Emperor Constantine built a basilica there in 326, following the instructions of his mother, Empress Helena, and Bishop Makarios of Jerusalem, who supervised the works.

Father Faltas, who accompanied Biden throughout, said that the president then proceeded to the silver star embedded in stone, representing the exact spot upon which Jesus was born, before joining the Custos at the small Grotto of the Manger, the section of the belowground cave marking the site where Mary is said to have set her the newborn baby in the manger. Brother Patton led a special prayer prepared to mark the presidential visit—the first visit to the Holy Land by a sitting Catholic president.

Brother Patton led a special prayer prepared to mark the presidential visit—the first visit to the Holy Land by a sitting Catholic president.

Saint Catherine’s, adjacent to the basilica, is where the Latin Patriarch of Jerusalem traditionally holds the crowded midnight Mass on Christmas Eve. Last Friday, anticipating Mr. Biden’s visit, it was empty.

“After going to the grotto he came to Saint Catherine’s Church, where I received him,” Father Faltas said, in an exclusive interview with America. “He arrived with the Custos and only one Secret Service agent.”

“He took a rosary out of his pocket, saying, ‘I always pray with a rosary,’ and remembered his son Beau. He cried. He was very emotional,” Father Faltas said, about the moment in which Mr. Biden kneeled alone in a wooden pew, the rosary in his hands, and prayed.

Mr. Biden appeared to still be affected by the experience when he got up and began walking around Saint Catherine’s. “To his left, a group of children began to sing for him—I don’t remember which song—but a group of kids from the Terra Sancta school, from different grades, began singing,” Father Faltas said, “and this seemed to comfort him.

“He walked right into the group of them, hugging them, and composed himself with them. He spoke of his son, and a barrier seemed to fall. It was his choice to join them. He wanted to go and kiss the children.”

And then the president turned to leave. “He said goodbye to the Franciscans at the door and went on his way,” Father Faltas said. Mr. Biden drove from Bethlehem to Jerusalem, only six miles away, where he boarded a helicopter for a departure ceremony at Tel Aviv’s Ben Gurion Airport, from which he flew directly to Jeddah, in Saudi Arabia. 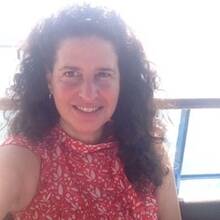 Noga Tarnopolsky is a correspondent covering Israel and Palestine and a frequent contributor to The Daily Beast. Her work has appeared in The New York Times, The New Yorker, The Washington Post and Ha'aretz among other publications.

@NTarnopolsky
Show Comments ()
Join the conversation: Login or create an account
Before you can comment, you need to update your profile to include your first and last name, as required in our comments policy. Then reload this page and you'll be set up for commenting. Update your profile