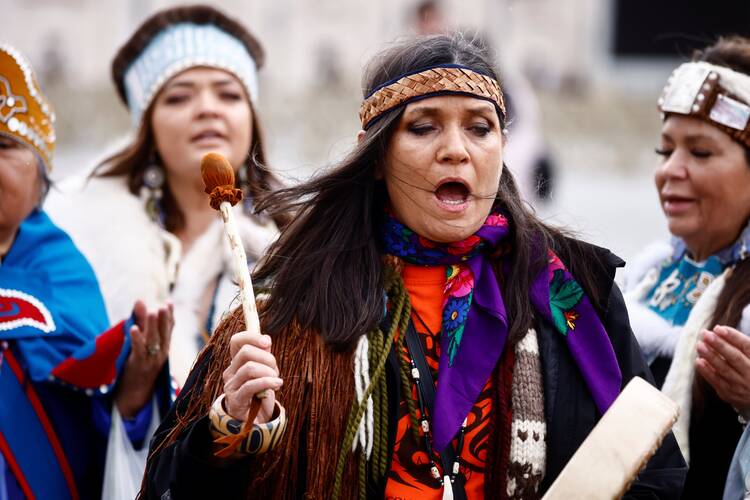 Women from Canada's First Nations gesture in St. Peter's Square after an audience with Pope Francis at the Vatican in this April 1, 2022, file photo. (CNS photo/Yara Nardi, Reuters)

In a message to all Canadians, Pope Francis said today that next Sunday, July 24, he would set out “in the name of Jesus” on “a penitential pilgrimage” to “meet and embrace the Indigenous peoples” of that land.

After reciting the Angelus with thousands of pilgrims in St. Peter’s Square on Sunday, July 17, the pope said: “Next Sunday, God willing, I will leave for Canada.”

Then addressing “all the inhabitants of Canada,” he said, “Dear brothers and sisters of Canada, as you know, I will come among you above all in the name of Jesus to meet and embrace the Indigenous peoples.”

Then, referring to the church’s role and the residential schools that it managed from the 1880s, Pope Francis recalled that “sadly, in Canada, many Christians, including some members of religious institutes, contributed to the policies of cultural assimilation, which, in the past, had severely harmed the native communities in various ways.”

“I am about to embark on a penitential pilgrimage, which, I hope, with the grace of God, can contribute to the journey of healing and reconciliation that has already begun.”

For this reason, he said, “I recently received in the Vatican some groups, representatives of the Indigenous peoples, to whom I manifested my sorrow and my solidarity for the harm they have suffered.” The pope met with representatives of the Métis and Inuit Indigenous peoples at the end of March and spoke to all the delegations of the First Nations in a gathering on April 1 in which he asked their forgiveness for the wrongs done to them at church-run schools.

He thanked the Canadians “for all the work of preparation” that they have done and are doing for his visit “and for the welcome you have in store for me.”

He concluded by asking them “to accompany me with prayer.”

Before addressing the Canadians, Pope Francis again turned his attention to the war in Ukraine, now in its 144th day, each of which has brought death, destruction and the displacement of Ukrainians as the Russians continue their effort to gain control of the whole southern region of the Donbas region.

“How can one fail to understand that war only creates destruction and death, driving peoples apart, killing truth and dialogue?”

Francis, who has spoken out more than 70 times against the war since it started on Feb. 24, today again said: “I am always close to the martyred Ukrainian population, struck every day by a hail of missiles. How can one fail to understand that war only creates destruction and death, driving peoples apart, killing truth and dialogue?”

He concluded, “I pray and hope that all the international actors will truly work to resume negotiations, not to fuel the senselessness of war.”

He has announced that he intends to visit Kyiv, the capital of Ukraine, after the visit to Canada. Vatican sources say the visit to Kyiv could take place in August or September if the Canadian visit confirms that he is physically able to make such a trip.

Last Sunday, Pope Francis expressed his concern at the political and social crisis in Sri Lanka as the country’s president fled the country following largely peaceful protests and later resigned. Today, the pope again expressed his closeness to the people of Sri Lanka and invited pilgrims in St. Peter’s Square to pray for them.