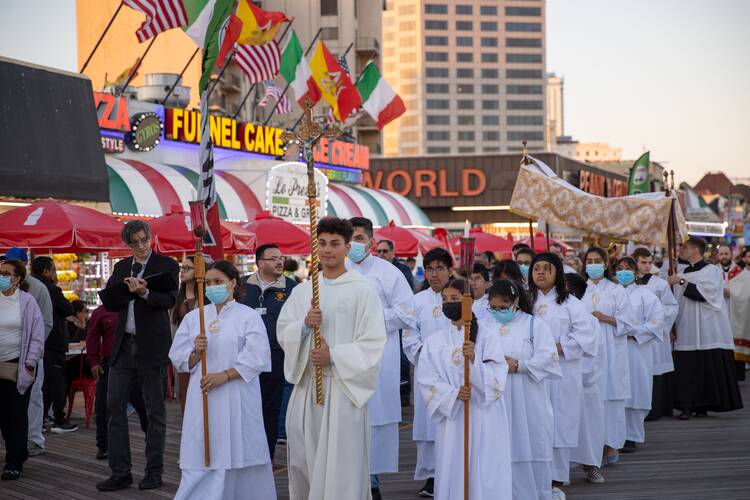 “Do you believe in miracles?”

My high school world history teacher posed this question to students at the beginning of our unit on medieval Europe. Even at my devout Protestant high school, most of the students answered “no.”

Of course, the lesson was that medieval Europeans did believe in miracles. We can see how the world has changed since the Middle Ages. However, the U.S. Conference of Catholic Bishops’ recent eucharistic revival campaign has recalled this experience to my mind. I believe that the bishops are trying to address this problem: Americans don’t believe in miracles, so American Catholics aren’t inclined to believe in transubstantiation.

The Eucharist, the bishops write, has a “social nature” and “sends us on mission to help transform our communities, neighborhoods and world.”

​​In other words, many Catholics still have not achieved what Bernard Lonergan, S.J., in Method in Theology, termed the “intellectual conversion”: the realization that there is more to the world than we can observe. The bishops have rightly identified this as a problem.

How can the eucharistic revival campaign contribute to this religious conversion? The U.S.C.C.B. has already described in detail the importance of the Eucharist to social justice on their website: The Eucharist, the bishops write, has a “social nature” and “sends us on mission to help transform our communities, neighborhoods and world.”

The Catechism of the Catholic Church, furthermore, instructs that “the Eucharist commits us to the poor” (No. 1397). To receive the Eucharist is not simply to participate in a sacramental re-enactment of the Last Supper. It is a profound promise that we will live as Jesus did, believe as Jesus did, give ourselves as Jesus did.

Ronald Rolheiser, O.M.I., describes how the act of receiving the Eucharist fundamentally reminds us of our equality before God: “At the Eucharist there are to be no rich and no poor, only one equal family praying together in a common humanity.” In every way, the Eucharist is a call to commit ourselves to social justice.

The eucharistic revival campaign can make this all the more clear by manifesting evidence of this truth. Eucharistic processions should connect wealthy parishes with materially poor parishes, so that socially divided communities may mingle and become one. Bishops should schedule adoration at the sites of deadly police brutality, in prisons, in homeless people’s encampments.

The bishops’ campaign can teach us not only what the Eucharist is, but what it requires of us.

Christ’s presence in the Eucharist is like his presence in his people: the impoverished, the marginalized, the oppressed. “Whatever you did for one of these least brothers of mine, you did for me” Jesus tells us (Mt 25:40). As with his words at the Last Supper, this is no metaphor: “In the poor, you have found a privileged place of encounter with Christ,” Pope Francis said at the 50th anniversary of the Jesuits’ Social Justice and Ecology Secretariat.

In the Eucharist is our call to believe something more. It is my hope that in pursuing an intellectual conversion for those Catholics who have lost themselves in American beliefs, the bishops may also inspire a religious conversion, propelling American Catholics to fight for a more just economy and a more Christian society.

The bishops are right to pursue a eucharistic revival. Only once we have realized the true miracle of Emmanuel, God with us, will we realize God’s presence in those we have cast aside. In the Eucharist we are forced to confront what we have left undone for God’s beloved children. The bishops’ campaign can teach us not only what the Eucharist is, but what it requires of us.