Why we need a eucharistic revival 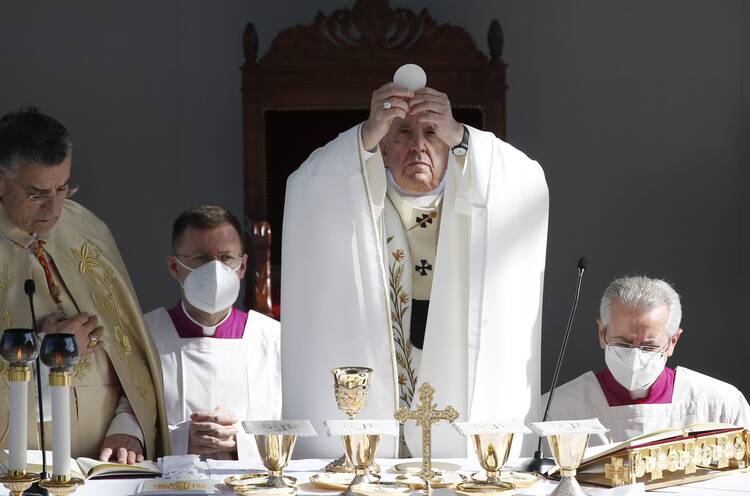 Pope Francis elevates the Eucharist as he celebrates Mass at the GSP Stadium in Nicosia, Cyprus, Dec. 3, 2021. (CNS photo/Paul Haring)

Did your parish have a eucharistic procession on the feast of Corpus Christi in mid-June? The return of this somewhat neglected practice at various churches was one part of the inauguration of a three-year program initiated by the Catholic bishops of the United States to foster a nationwide eucharistic revival, “a movement of Catholics across the United States, healed, converted, formed, and unified by an encounter with Jesus in the Eucharist—and sent out in mission ‘for the life of the world.’” While the process will rely heavily on grassroots efforts at the parish and diocesan level for much of its duration, it will culminate in a national Eucharistic Congress planned for 80,000 people in Indianapolis in 2024.

Why begin a eucharistic revival now? One reason is that a number of polls over the past decade have shown that many Catholics do not understand what the church teaches about the Eucharist, including a poll by the Pew Research Center in 2019 that showed only one third of U.S. Catholics believed in transubstantiation. Even if those results may have been skewed by the terms used in the polling questions, they showed that a central doctrine of sacramental theology was widely misunderstood.

Clearly, at some level the church needs to improve its catechesis. And a definite positive in the way the bishops have mapped out how the eucharistic revival will take place—through personal outreach and devotional activities as well as education—is that they are taking seriously the notion that fresh approaches are needed. Criticizing the faithful for ignorance or seeking someone to blame will do far less to bring Catholics to a greater understanding of the Eucharist than a straightforward approach that stresses the rich, life-giving theology of the sacrament.

The danger we face as a church is not so much hostility toward the church and its sacraments, but apathy.

A second reason for a eucharistic revival that every practicing Catholic will recognize is the Covid-19 pandemic, which brought about a sacramental famine across the globe for almost two years. As valuable as “Zoom Masses” and televised liturgies were to many, they by definition cannot deliver the tangible “taste and see” reality of the Eucharist—or of Mass itself.

It is also important to recognize that not everyone came back. Even as most churches reopen, there are some Catholics who feel they cannot safely return to Mass because of health conditions that make them particularly vulnerable to infection. Others who previously practiced have grown comfortable with a Sunday that no longer includes Mass. It will be a tragedy if Catholics who long relied on the Eucharist for nourishment simply stick with new habits. In this sense, the danger we face as a church is not so much hostility toward the church and its sacraments, but apathy. But those who have fallen away will not be brought back by being corrected. They might be brought back by being encouraged.

There is a third reason, too, and it is perhaps not stressed enough: We need to stop thinking of the Eucharist as a reward, or as food for the elect few. Instead, we need to remind ourselves and the world that, in the words of Pope Francis in “The Joy of the Gospel,” the Eucharist is “not a prize for the perfect but a powerful medicine and nourishment for the weak.” It is not and should not be a political weapon. To quote Francis again, “frequently, we act as arbiters of grace rather than its facilitators.” The eucharistic revival offers a chance to remind ourselves and others why we cherish the Eucharist most—and that without God’s grace we would all be unworthy to receive.

The Eucharist is “not a prize for the perfect but a powerful medicine and nourishment for the weak.”

There are many in the church who feel the bishops are making the eucharistic revival too significant a priority when the church faces other pressing problems, including financial ones. In a time of parish and school closures and of stark financial shortfalls in many church ministries, it can be tempting to be cynical about the expenditure and effort that is going into this revival. The U.S. bishops have estimated, in fact, that they will need to raise over $28 million to fund the concluding four-day congress in Indianapolis. Couldn’t the money be better spent elsewhere?

We have been rehashing that argument since the church was in its infancy: “This perfume could have been sold at a high price and the money given to the poor” (Mt 26:9). But there is reason to question whether there is something of the evil spirit lurking behind some of the accusations of misplaced priorities in the bishops’ program. If we cannot or will not give of our resources to increase devotion to the Eucharist, does that suggest that reviving Catholics’ understanding of the central place of the sacrament in our lives is simply not worth the trouble? If the Eucharist is the “source and summit of the Christian life,” should it not be a priority in a suffering, struggling church to renew and strengthen our relationship with it?

It will also be important as this process continues that at every step of the way, this revival is a synodal effort, not just a top-down exercise or a project taken up only by wealthy parishes. Outreach is not just inviting others to come and see; it is also literally going to where they are and understanding that reality too.

As a Jesuit ministry, we at America also recognize the strong emphasis in Ignatian spirituality on adoration and reception of the Eucharist, as well as the traditional Jesuit apostolate of promoting devotion to the Sacred Heart of Jesus, a practice intimately associated with eucharistic devotion. As our contribution to the eucharistic revival, America has committed itself to feature regular reflections on the Eucharist for our readers. In the current issue, Joseph Laramie, S.J., explores the connection between eucharistic devotion and reception of Communion and our desire for friendship with God.

“​​Our world is hurting,” says the website created by the U.S. Conference of Catholic Bishops for the National Eucharistic Revival. “We all need healing, yet many of us are separated from the very source of our strength.” Our church, too, is hurting and in need of healing and hope. Can’t we all seek it in the very gift Jesus gave to the people of God?