The feast of Corpus Christi comes out of medieval spirituality. But it is not a relic of the past. 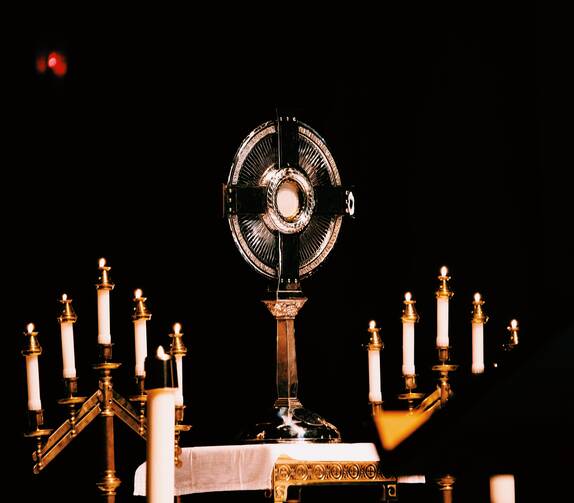 Photo by Gianna Bonello on Unsplash

A Reflection for the Feast of Corpus Christi

Many stars did not survive Hollywood’s transition from silent films to sound. Speaking required a new set of acting skills, and some simply did not have the right voice.

Although Greta Garbo’s first pictures were silent, her physical attributes, those eyelashes and that symmetrical face, were mesmerizing. With the advent of sound, she entered superstardom, becoming an indelible icon of culture. People loved her Swedish accent, and critics still insist that she ranks as one of our great actors.

She might have become the greatest, but without any announcement, perhaps without conscious decision, Garbo was gone. No more movies. Indeed, no more Garbo. Having reached the height of celebrity, she decided that she no longer wanted to be one. Privacy meant everything to her. It was as if her famous line from the film “Grand Hotel” had become her mission: “I want to be alone. I just want to be alone.”

Corpus Christi is about seeing Christ. It emerges from a medieval spirituality, when the liturgy was celebrated in a foreign language.

After that, getting Garbo on film, even a photograph, became a quest. Some said she refused to let the world watch the dimming of her celebrated beauty as she aged, though the few photographs she left us, after she left us, show a woman who remained quite stunning. Others insist that she had always been an introvert, someone drained by contact with crowds.

In 1931, Harriet Parsons, daughter of the Hollywood doyenne and famous columnist Louella Parson, published her own little piece in the magazine Silver Screen, “24 Hours with Greta Garbo.”

She had heard that Garbo sometimes went to a little theater in “the Mexican quarter” of Los Angeles. The cub reporter waited for hours at a nearby cantina and was rewarded by Garbo’s stealthy entrance. She then followed the star to the show next door and even trailed her to her home. There was no name on the mailbox, and the house was hidden by walls of trees.

I cross the lot on the east side of the house, hoping to get a view from the back—but a sheer cliff faces me. Garbo’s garden ends at the cliff’s edge and an iron railing runs along the brink. But, just between the last tree in the impenetrable wall of foliage, and the beginning of the railing is a tiny clear space, not more than two feet square. With a sudden burst of courage, I gain a precarious footage somewhere between earth and heaven, and, standing on this spot at peril to life and limb, I can see over a waist-high hedge—at last, a clear view of Garbo’s house.

Why did Harriet Parsons risk her life for a glimpse of Garbo? Because she knew that her story would be sold to millions. Garbo was a goddess, and people have always wanted to see their divinities. Besides some kittens and an empty parrot cage on the lawn, a single paragraph sums up the glance she got.

I can see a figure lying on the grass in a patch of sunshine. It is Garbo. She is curled up under an old robe with only her bare legs visible. She talks to the cats. She sings in a deep pleasant voice a German song—Schubert’s Serenade. At twelve the cook comes out, bringing luncheon on a tray. Garbo speaks to her in English, asking for some Swedish bread! They talk a moment—gesturing towards the empty cage. They are bewailing the fact that the parrot has flown away. Both are despondent, but Garbo especially feels the loss.

Corpus Christi is about seeing Christ. The church’s more complete commemoration of the Eucharist is, of course, Holy Thursday, where the sacred meal, at the command of Christ, becomes the very expression of his gift of self on the cross. Holy Thursday returns annually on the calendar and every day in the liturgical life of the church.

Corpus Christi is about seeing Christ. It emerges from a medieval spirituality, when the liturgy was celebrated in a foreign language; when those who came to church attended to their own devotions rather than to the action on the altar; and when precious few people—almost no one, to tell the truth—came forward to receive holy Communion.

The church tends to rearrange her treasures rather than abandon them. Some go into storage, only to emerge in a new style and scheme.

Back then, most of the faithful only had communion with Christ by way of sight. They looked up when bells were rung to indicate that the words of consecration had been said, and some churches even came with spy portals, not unlike Ms. Parson’s perch. So one did not need to be in front of the altar to catch a glimpse.

With the Second Vatican Council and the return of the sacred liturgy to the faithful, Corpus Christi seemed to become a relic of an earlier, deprived spirituality. But the church tends to rearrange her treasures rather than abandon them. Some go into storage, only to emerge in a new style and scheme.

Still, what is the point of looking at Christ? Why stay and stare at the eucharistic presence when you can celebrate the Eucharist? What does a consecrated host, exposed on an altar, add to the presence of Christ, which the community already celebrates at the Eucharist and reserves in the tabernacle?

Perhaps exposure is the point. For one who does not believe, what a fuss there is about a piece of bread! Indeed, early Puritans, mocking the Catholic belief that Christ was truly, not just spiritually, present in the Eucharist and that his presence remained in the consecrated host, began to use the Latin words of institution “Hoc est enim corpus meum” as something of a derisive ditty. To them, the phrase had always been mumbled in haste. Now in the acceleration of ridicule, it became “hocus pocus,” the very expression of misleading nonsense.

The night before he died, Christ clearly vowed that two rather commonplace commodities—bread and wine—would become his precious and precarious presence among us.

Perhaps exposure is the point. Who was Christ on the cross other than the God of Israel naked, exposed, a subject of possible ridicule?

Come, all who pass by the way,
pay attention and see:
Is there any pain like my pain,
which has been ruthlessly inflicted upon me,
With which the Lord has tormented me
|on the day of his blazing wrath? (Lam 1:12).

One could argue that Corpus Christi, especially with its outdoor processions of the Blessed Sacrament, is an outdated expression of piety, one that arose in a time of impoverished spirituality. Yet the church continues to rummage through her relics. She is quite convinced that what she does, even with her ever-limited understanding and insight, she nonetheless does at the command of Christ, indeed in his presence and in the power of the Holy Spirit.

So, maybe Christ is the author of Corpus Christi. Unlike Greta Garbo, he chose to be exposed, to be vulnerable, ridiculed or worse, ignored. Maybe he is always finding new ways to be both precious and precarious.