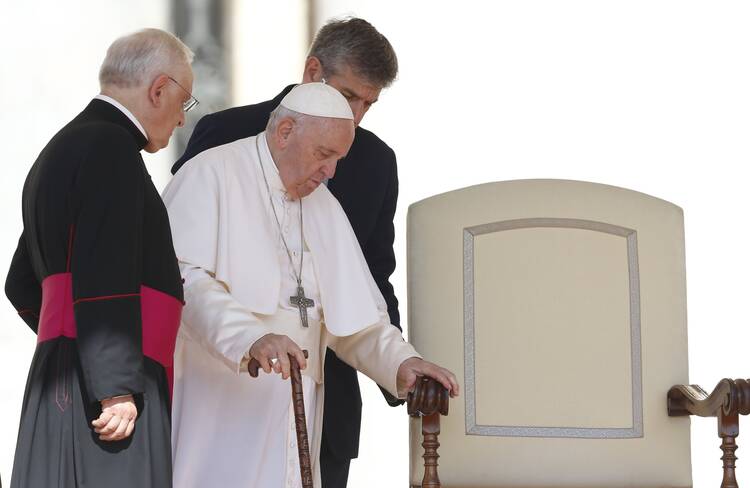 Pope Francis arrives at his chair during his general audience in St. Peter's Square at the Vatican June 8, 2022. (CNS photo/Paul Haring)

Pope Francis’ increasing mobility woes were already leading some to speculate that another papal resignation might soon be on the horizon.

On June 4, the Vatican announced that in the two days between the making of new cardinals in August and the unprecedented meeting of the world’s cardinals, Pope Francis would leave Rome for the central Italian city of L’Aquila, where he would, among other things, visit the tomb of Celestine V.

This announcement might have gone unnoticed had it not been that Celestine V was the first pope to resign voluntarily, and that Benedict XVI had made a pilgrimage to the same pope’s tomb four years before announcing his resignation from the chair of Peter. It was this, Gerry says, “that provided ammunition for the guns of speculation.”

And while neither Gerry nor Colleen believes a papal resignation is imminent, on this episode of “Inside the Vatican” they consider the reasons to heed, or not, the rumors that Pope Francis will soon follow in the footsteps of Benedict XVI and Celestine V.

Lastly, we’d love your feedback on the show! Please take this brief 2022 ITV Listener Survey and let us know what you’d like to hear in future episodes!