Could Julia Greeley be one of the church’s first Black American saints? 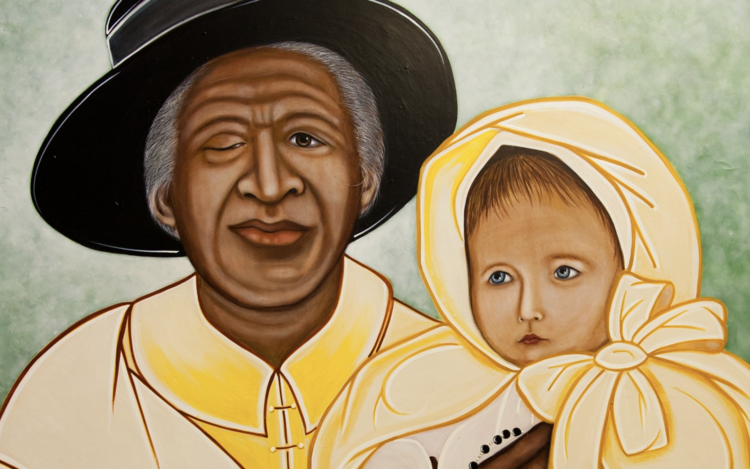 A white marble tomb stands to the left of the altar in Denver’s Cathedral Basilica of the Immaculate Conception. It is the only tomb in the whole of the building.

Yet, surprisingly, the remains inside do not belong to a priest, bishop, cardinal, founder of a religious order or doctor of theology.

Instead, they belong to an uneducated, marginalized woman who spent her life struggling to find stable work. Her name is Julia Greeley, and she just might become America’s first Black saint.

Her canonization cause was officially opened in late 2016, giving her the title “Servant of God.”

Born into slavery in the 1830s or ‘40s, young Julia lost her right eye to the whip of a cruel overseer who was abusing her mother. Emancipated in 1865, she eventually made her way to Denver, where she took up a position as a domestic servant. Shortly after her arrival, she converted to Catholicism and wholeheartedly embraced her new Catholic faith.

Born into slavery in the 1830s or ’40s, young Julia lost her right eye to the whip of a cruel overseer who was abusing her mother.

Holding a deep devotion to the Sacred Heart of Jesus, Greeley always attended daily Mass at her home parish, Sacred Heart Catholic Church. On June 7, 1918, while heading to Mass for the feast of the Sacred Heart, Greeley fell ill and died later that day.

One would expect everyone to gloss over Greeley’s death as she had no known family. Yet, when it came time for her wake, something unexpected happened. For five straight hours, scores of mourners came to pay their respects.

As the crowds began to talk, Greeley’s hidden life surfaced as everyone had a story about this humble woman who became known as “Denver’s Angel of Charity.”

When Greeley was not working, she spent her time visiting friends and neighbors. All the while, she took mental notes on what they were lacking. Then, once she pinpointed a need, she searched, begged and even spent her meager wages to acquire the missing items.

At night, Greeley would set out to deliver her goods under cover of darkness to refrain from embarrassing anyone. Pulling a red wagon through the streets, she acted like a modern-day St. Nicholas as she secretly left acquired items on doorsteps.

“Everything she did was from the Gospels. Taking care of her brothers and sisters, giving others her last.... Julia did not just talk the talk, but she walked the walk.”

“She was a one-woman St. Vincent de Paul Society,” explained Mary Leisring, president and director of the Julia Greeley Guild, “Her whole demeanor was to help others, even though she herself did not have much.”

Leisring, an original advocate for spreading Greeley’s story, felt there was something exceptional about her when she first heard of Greeley.

“Julia was a true disciple,” she explained. “Everything she did was from the Gospels. Taking care of her brothers and sisters, giving others her last.... Julia did not just talk the talk, but she walked the walk.”

“Reveal the Gift: Living the Feminine Genius,” which includes a chapter reviewed by Leisring on Greeley’s generosity, shares further:

“Julia’s generosity truly knew no limits.... Accounts tell of her finding and delivering baby buggies to pregnant mothers, carrying a mattress on her back in a dark alley at night, and supplying funeral clothes and food whenever a family was in mourning. Once, she even gave up her grave for a deceased elderly Black man to prevent him from being buried in a potter’s field. For her, finding ways to provide for others flowed from her trust in Jesus’ providence, and giving was a privilege and a joy.”

“Despite the racial injustices she experienced, Julia did not waver in her care for the poor and spreading devotion to the Sacred Heart, especially among firefighters,” shared David Uebbing, vice postulator for Greeley’s canonization cause.

As Uebbing explained, Greeley walked to each Denver fire station every month to pass out red rosaries, Sacred Heart badges and leaflets that promoted devotion to the Sacred Heart of Jesus. Since firefighters were engaged in dangerous work, she urged them to look after their souls and prepare for death at any moment.

“By learning about Julia we can learn little things we can do that make a difference in people’s lives,” explained Leisring, “You don’t have to be a CEO or hold a prestigious position to help your brothers and sisters in Christ.”

“Her history was present in the streets, homes and alleys of Denver and a pew in the front left of Sacred Heart Parish,” echoed Uebbing. “She wasn’t taking part in events or ceremonies that were front page news, she was humbly serving others with no thought of seeking the limelight.”

The next step in Greeley’s cause would be a declaration she lived a life of heroic virtue, giving her the title of “Venerable.” After that, in general two miracles attributed to her intercession and verified would be needed, one for her beatification and one for her canonization.

Only time will tell if “Servant of God” Julia Greeley will become St. Julia Greeley Until then, turning to her as an example of true discipleship can undoubtedly inspire Catholics to be a little more faithful and generous.

Lisa Cotter — Catholic News Service
Show Comments ()
Join the conversation: Login or create an account
Before you can comment, you need to update your profile to include your first and last name, as required in our comments policy. Then reload this page and you'll be set up for commenting. Update your profile