Angry at the church? Mass may be the only place to heal. 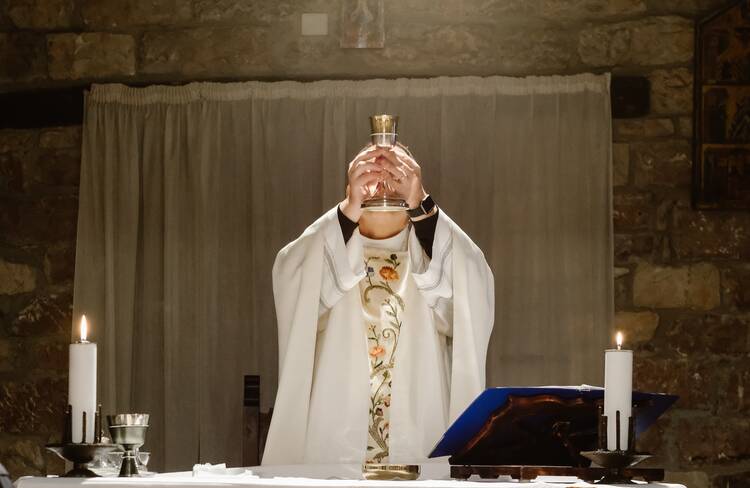 At the Eucharistic prayer we worship with, literally, all the angels and saints in heaven; who sing regardless of whether the humans below are praying with them at Mass or crouched in a field digging up a tuber. (Unsplash/Josh Applegate)

One day Nettie Holmes, my fourth grade teacher at St. Robert Bellarmine, was teaching our class how to go to Mass. Thin brown sweater draped acrylically over her shoulders, she pointed at the altar, where the priest would in a real-life Mass be holding up the host. “That is the moment,” she said. “That is the moment.”

Wafer up and rattle of bells and then church dead quiet, infiltrated by real presence.

She said it almost with…anger is not quite the right word. But in that edgy way when you really need to break through the brick wall of a 10-year-old’s mind and let them know that a thing really is that thing. Bread become body. Finger jabbed, dark eyes alight, that is the moment.

If you are a down-the-line adherent of Catholic doctrine, the Mass, and particularly the consecration, towers above all human reality. Nothing metaphysically greater can happen; at least not since the original incarnation. The words and rituals of liturgy as a whole: Invocation. Scripture. Petitions. Eucharistic Prayer. Then, Elevation: All of everything concentrated right there. The world revolving around that one silent, still point.

The great Catholic irony is that the Mass—that ripe cadenced insane activity at the heart of the church—is weirdly, bizarrely, the right and fitting place to bring our concerns about the Mass itself.

If we are alienated or disturbed or just plain annoyed by the church we attend because of issues around the liturgy (the a-poetic translations of the ritual prayers, a cantor unable to hit the high “C” as marvelously as we expect, the disturbingly smart haircut of the priest, how long and loud the altar girl rings the bell, the syrupy port wine used for the Eucharist, how the priest transforms his sermons into “Firing Line” talking points, an announcement before Communion that includes the heartwarming phrase “Catholics in good standing”); if we are disturbed or even incensed by issues within the Catholic Church as a whole (those enduring bedeviling contentions around money, power, sex); if any of these annoyances or plain hurts orbit the troubled galaxy of our consciousness, the great Catholic irony is that the Mass—that ripe cadenced insane activity at the heart of the church—is weirdly, bizarrely, the right and fitting place to bring our concerns about the Mass itself.

The very soul of the very place that kicks up one’s ecclesial anger may be the only place to fully, existentially, deposit, heal and even, as it were, consecrate our anger.

Mrs. Holmes is waiting, just waiting there, to point us to the point of it all.

Jeremy Driscoll writes, in a marvelous and arrogant claim about Catholicism: “God addresses Himself to the world not vaguely but through the Church.” And in a unique way through the liturgy of the church. The document “Sacrosanctum Concilium,” from the Second Vatican Council, declares that Mass, “because it is an action of Christ the priest and His Body the Church, is a sacred action surpassing all others.”

In other words, this is it.

At the Eucharistic prayer we worship with, literally, all the angels and saints in heaven; who sing, always, a chorus of thanks and praise to God; who sing regardless of whether the humans below are praying with them at Mass or crouched in a field digging up a tuber.

When we go to Mass, writes Driscoll, “We bring our lives...and say ‘do something with this. Make our lives be what your life was and is.’” We go humbly and beg Christ to help us be like Christ.

Jaroslav Pelikan calls worship “the metabolism of the Christian life.” It is in worship we can throw all our hurts, pain, doubts, confusions about not only our daily lives and troubled world, but about the aesthetics, languages, doctrines and practices of our church; we heave it all into the purifying furnace at the heart of that same church.

One Sunday night, I walked home down icy sidewalks from Mass in my neighborhood, and wondered if I actually lived this myself, although I claim to believe it, these metaphysical points of faith about what is happening in the liturgy. Does attending Mass and praying with a billion seraphim and falling silent at the elevation actually become a felt thing, a consoling thing, a thing that actually transforms one’s relationship with the church?

Because frankly I had found it supremely annoying when the priest that night, at the consecration, cantilevered his entire white-robed torso over the altar, inches away from the host, and spoke directly and maddeningly slowly at the wafer, as if intoning into a tiny intercom instructions to a lunchroom of remediate 4-year-olds: “Take this….all…of you…and eat….of it.”

It was startling and weird and awkward and robotic and a thing I did not love to be in front of.

In the end, no one else can “ruin” our experience of Mass—or of anything—unless we let them.

What I am really tempted to do is find another Mass. Regardless of the rubrical reason he does this elaborate lean-over (the origin of which and intent I do not know and will leave to priests to debate) his style of doing that rubric is over the top.

Nevertheless. I have heard it said that whatever disturbs us from the outside usually means there is something we need to change on the inside. In the end, no one else can “ruin” our experience of Mass—or of anything—unless we let them. A moment of annoyance or even rage at someone else lights up some bevel, some splinter in us that always gets caught up on the witchy branches of other people’s unchangeable actions; and that needs to be sanded down. Beholding a categorically frustrating thing at liturgy is just another opportunity for us to learn how to detach from being bothered by frustrating things, a chance to beg for the peace to accept what we cannot alter.

(And just to say, the priest at my parish is not personally rigid, but quite warm and kind, someone you want to be around.)

The Mass we went to is exactly the Mass we needed to go to at that moment. The church as it is, right here and right now, is exactly the way the church should be at this moment. God works in no other way than in things as they are. If the recent restrictions put on the Latin Mass disrupt us cataclysmically, then those restrictions were intended directly for us, to shake loose some festering hurt in the soul. Accepting reality exactly as it is, not resisting the truth of any given moment, not fighting what we cannot change is the only way to thoroughly tear down the border walls to the entrance of God’s grace into the fearful territory of the soul.

God enters into the thin places, where we are frayed, disturbed, powerless, and there he does the deep work of purifying, reclaiming, redeeming.

I write none of this about the beautiful metaphysics of Mass and church to recruit any self-exiled Catholic back into the pew. There is no expected outcome here. But maybe it is nice to know that, whether we are present or not, this unremarkable and sublime ritual goes on; candles flicker, smoke rises, altar server yawns; mercies are begged, Samaritans honored, hosts lifted. Mass goes on, all over the place, and, in a way, no matter where we are, is always present to us.