I’m afraid to return to Mass in person. And it’s not because of Covid. 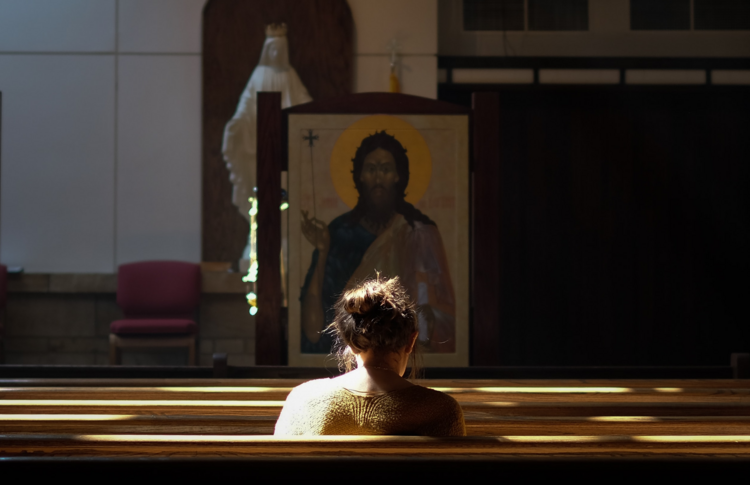 For two years now, I have gone to Mass twice every Sunday, although I do so seated at my kitchen table. I can see the local Catholic church from my window, but I haven’t been inside it since the brief window, mid-pandemic, of supposed normality in July 2021. From my small town in Oregon, I go to Mass first in Chicago and then in Los Angeles.

Perhaps I should say that I go to services in Chicago and Los Angeles, as no one has yet figured out how to go to Communion via Zoom. I do miss receiving the Eucharist. In years past, when I worked for a Catholic parish, I often went to daily Mass. Back then, I couldn’t have imagined going without the Body of Christ for months or years, as is the burden of some communities in remote areas of the world. I always felt blessed to have the opportunity to go to Mass whenever I wanted. But I was a different person back then.

I think of my Catholicism now as a fragile little bird that I keep sheltered in the nest of my heart.

My life changed when one of my children came out of the closet. As the parent of a transgender person, I felt called to advocate publicly for civil rights and equal treatment for the L.G.B.T. community, which meant that I had to leave my paid position at the parish. The sexual abuse scandal was also swirling around the Catholic Church at the time. My husband, a cradle Catholic, opted out and became an Episcopalian. The safe edifice of my Catholic family had crumbled.

Long story short: I fell from being a pillar of parish programs to sitting alone in a back pew. I think of my Catholicism now as a fragile little bird that I keep sheltered in the nest of my heart. I’m still here. Even as my trans child felt abandoned and reviled by the faith into which they were baptized, even as my husband was no longer at my side during Mass, I stayed. I was a Catholic, by God. I was not going to be driven out. Rather than throwing up my hands and surrendering, I held on by a fingernail. The personal criticism, the institutional blindness, the wear and tear of alienation, even the lurking guilt I had for not leaving the church to support my child would not win.

But there were many times I wanted to get up and make a dramatic exit during a homily that, for example, compared civil marriage equality to letting monkeys marry. I would tell myself that one priest’s unkindness did not represent Jesus. In this age of “traditionalist” rhetoric spouted by some American Catholics in the public square—trashing the pope and pretty much ignoring Catholic social justice teaching—I knew that the call of Jesus was not what I was hearing from those sources. But Lord, they were loud.

Even as my trans child felt abandoned and reviled by the faith into which they were baptized, even as my husband was no longer at my side during Mass, I stayed.

Then came the pandemic of 2020, when going to Mass in person was not a safe option; in some places it was not an option at all. Catholics looked for Masses in parking lots or on TV. Searching the internet brought me to two Zoom Masses far from my home. One was streamed from a large and vibrant parish in a city. Another was broadcast by a friend, a retired priest who said Mass at his own kitchen table. I felt protected from the virus by using these opportunities, and my little bird of faith felt protected, too, by the love and compassion that informed the homilies given by the priests and deacons at these Masses.

It's not that I felt safe from controversy, or placated in my own bubble of belief, because these homilies were thought-provoking and challenging. I wasn’t only hearing what I wanted to hear. But I felt engaged. I also felt focused. Sitting alone at my table, nothing distracted me from the Scripture readings or the prayers of intercession. Seeing the digital grid of fellow Catholics—living, breathing worshippers who were similarly isolated—somehow gave me a stronger sense of communion than I had felt in a church building in a long time. Several of us sometimes stayed online after Mass ended to discuss the homily. I was finally grasping the meaning of spiritual communion. I didn’t expect it to be enough, but it was.

To be honest, I’d expected to yearn for the Eucharist with a profound physical hunger. After all, I’d thought it was exclusively the Eucharist that had kept me Catholic throughout the years of personal doubt and wavering. When that sense of longing didn’t come, it surprised me. The Prayer of Spiritual Communion, however, has moved me deeply. I’ve prayed it intensely: Never permit me to be separated from you. Although I’m alone, I’ve felt more connected to God and to the Church than I have in years.

I’m afraid that some misguided homily is going to be the straw that breaks me, the last straw that finally makes me leave this church that I belong to, that I say I love.

Now my local parish offers three weekend Masses. Now I am vaccinated. Now the mask mandates are being relaxed as the Covid-19 infection numbers and hospitalizations recede. We can gather. From my window, I can hear the bells tolling the start of each Mass. Every week I plan to go. Every Sunday I do not go. Why? I should be running back to in-person Mass so I can embrace the real presence of the Eucharist.

I’m afraid of once again confronting a superficial pro-life philosophy, one that is pro-pregnancy but against providing any assistance to those in need, even the bootstraps by which they are supposed to pull themselves up. I’m afraid of once again encountering members of the clergy and laity who parrot cruel political talking points while dismissing Pope Francis’ call to tenderness. Mostly, I’m afraid that some misguided homily is going to be the straw that breaks me, the last straw that finally makes me leave this church that I belong to, that I say I love. Even as I confess this weakness of faith, I recognize my fear that my little bird is not viable outside the nest. I do believe, Lord. Help my unbelief.

I suspect I’m not alone in this reluctance to go back to face the Church as it was before the pandemic. But my Zoom communities are changing, as Mass is now coming from a church building full of actual people, and that is as it should be. The pandemic’s revelation of the ability to Zoom on Sunday has been a godsend for homebound folks, and I hope it continues for their sake.

But ours is an incarnational faith. The real presence of Christ demands our presence. I am going to have to get up from my table and go to Mass, to participate in the liturgy and receive Communion, to volunteer in ministry and give back to my parish community in some way. This is how it will go in a perfect world, one in which I am unafraid. I hope and pray to get there. I’m not there yet.

Valerie Schultz is a freelance writer, a columnist for The Bakersfield Californian and the author ofA Hill of Beans: The Grace of Everyday Troubles. She and her husband Randy have four children and three grandchildren.