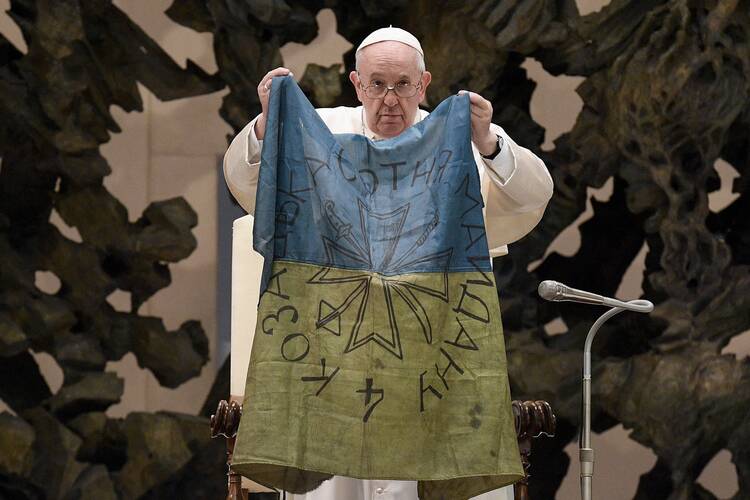 Pope Francis holds a Ukrainian national flag from Bucha during his general audience in the Paul VI hall at the Vatican April 6, 2022. (CNS photo/Vatican Media)

After months of saying publicly he would do everything possible to stop the war in Ukraine, including making a visit to the besieged country, Pope Francis told La Nación, an Argentinian newspaper, that a trip to Ukraine was now off the table.

There are plenty of reasons that could underlie this decision: For one thing, Pope Francis has recently experienced intense pain due to a torn knee ligament. In the last two weeks, he has backed out of celebrating two public Masses that he was scheduled to preside over, opting instead only to preach at them while seated.

As Ken Hackett, a former U.S. ambassador to the Holy See, told America recently, there are also numerous logistical and security concerns around such a papal trip:

The preparations for such a visit are grueling. It is planned down to the minute, if it is anything like the one we put together for the United States in 2015. So he goes to Kyiv, how does he get in there? Where does he go in Kyiv? He probably stays at the nunciature. And when does he meet with Zelensky? Does he have a public Mass?

Mr. Hackett described the “tremendous burden” the trip would be on Ukraine’s already-strained national security apparatus; there is also no guarantee that Russia would ensure safe passage for the pope.

Finally, there is the perennial calculus one must make when analyzing the Holy See’s diplomatic decisions. In his book God’s Diplomats: Pope Francis, Vatican Diplomacy and America’s Armageddon, Victor Gaetan points out that each Holy See diplomat “takes an oath to maintain the secrets of the Holy See, and most take that rule quite literally.” That secrecy permeates all levels of Vatican diplomacy, and as a result, it is nearly impossible to know what is going on behind the scenes.

After months of saying publicly he would do everything possible to stop the war in Ukraine, including making a visit to the besieged country, Pope Francis said that a trip to Ukraine was now off the table.

In the same interview with La Nación, when asked if the Vatican was attempting to mediate between Russia and Ukraine, the pope said: “There are always procedures. The Vatican never rests. I cannot tell you the details because they would cease to be diplomatic efforts. But the attempts will never stop.”

It seems likely that Pope Francis has backed off from the possibility of a papal visit to Ukraine and suspended his meeting with Russian Orthodox Patriarch Kirill, a supporter of the Russian invasion—both of which would be highly publicized—in order to keep lines of communication open between the two countries and enable the Vatican’s behind-the-scenes diplomatic work to proceed without public events that might seem to put a finger on the scale of one side or another in the conflict. As Mr. Gaetan writes, the Vatican’s unique position as a city-state with no military or economic interests earns it the trust of other states; to guard that neutrality, the Vatican tries to advocate for peace, human rights and freedom of religion without, for example, criticizing aggressors by name. This has garnered understandable criticism, but as the pope told La Nación, “a pope never names a head of state, much less a country, which is greater than its head of state.”

In fact, Pope Francis indicated in that interview that he had not gone to Kyiv because he “cannot do anything that puts higher objectives at risk, which are the end of the war, a truce or, at least, a humanitarian corridor.”

This reasoning makes sense: The Holy See’s ultimate goal is peace, and it does not want to do anything to jeopardize the possibility of negotiations. It is interesting to see exactly what lines the Vatican draws between its duty to speak out against unjust aggression and its desire to keep communication lines open.

It is interesting to see exactly what lines the Vatican draws between its duty to speak out against unjust aggression and its desire to keep communication lines open.

But Pope Francis followed up on this comment with a puzzling rhetorical question: “What good would it do for the pope to go to Kyiv if the war continued the next day?”

This seems to be a departure from Pope Francis’ usual approach to such conflicts. In November 2015, the pope visited the Central African Republic, which was in the midst of a civil war, in order to encourage the country’s nascent peace process to continue. The fighting continued after the pope left (and in fact continues to this day), but so did a series of ceasefire agreements. By all accounts, the papal visit helped ensure a period of peace that included the country’s 2016 elections—an example of the good a papal visit can do even if it doesn’t stop a war completely.

The pope’s comment is puzzling from a theological viewpoint: The Christian message is not about effectiveness. There is inherent good in advocating peace whether or not that advocacy is successful. Jesus’ preaching appeared not to be effective; in fact, it got him killed. But it was that very defeat that led to his ultimate triumph, and it is in his footsteps that so many Christian martyrs have followed, witnessing to the Christian message of mercy and peace up to their last moments. Were they effective in stopping their killers? No, and yet we believe that they were the ultimate victors. According to Mr. Hackett, this is exactly the type of message that a papal trip to Ukraine would deliver.

I do not mean to imply that Pope Francis is failing in a Christian duty; the diplomatic tightrope he is walking is difficult and mostly hidden, and there are many more lives on the line than his own. But I believe the pope could have better expressed his reasoning for not visiting Kyiv—or simply left it at, “I cannot do anything that puts higher objectives at risk, which are the end of the war, or a truce or, at least, a humanitarian corridor.” There are plenty of good reasons for the pope not to visit Ukraine. Futility is not one of them.