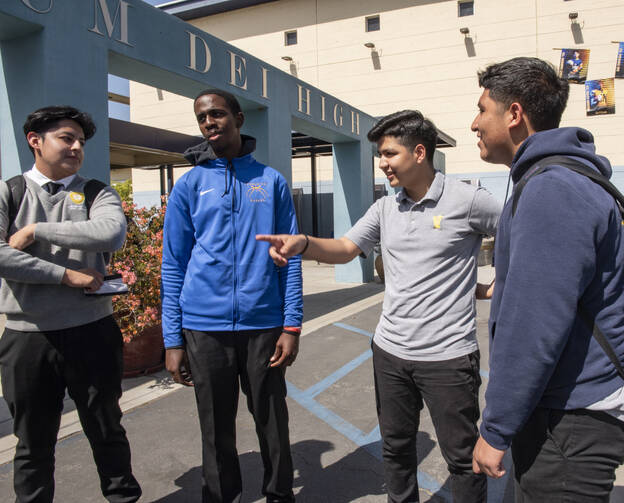 The N.B.A. all-star DeMar DeRozan is from Compton, Calif., a Los Angeles suburb often associated with gangs, drugs and violence. Basketball offered Mr. DeRozan and other stars from the area—like the 2017 M.V.P. Russell Westbrook—a different option.

Growing up in the same area, Jamaul Cotton thought basketball could be his path, too. But his mother had other plans. As he was entering ninth grade, she pushed for him to enroll in Verbum Dei High School, a Jesuit-run school in the Watts neighborhood of L.A. that is part of the Cristo Rey Network.

Students at Verbum Dei spend four days a week in school and one day a week in a corporate work-study program.

“Being there kind of changed my perspective on life, right?” Mr. Cotton said. “It made me realize that someone like me doesn’t always have to go through sports or like, be a rapper to make it out of whatever situation you’re in. There are more outlets to being successful than the things we’re taught in the community.”

Students at Verbum Dei spend four days a week in school and one day a week in a corporate work-study program. That program helps defray the costs of tuition, but, more important, it exposes students to real-world job experiences.

For Mr. Cotton, those experiences began when he was 14. His four years at “Verb,” as the students and faculty call it, consisted of intense study, basketball and working at Crescent Capital Group, a private equity firm in L.A.

Students predominantly come from communities of color; 71 percent are Latino and 15 percent are African American.

On mail runs through the building, he would talk to full-time employees about what they studied in college and how they wound up working at the company. Joe Viola, the chief operating officer of Crescent Capital and the board chair at Verbum Dei, met Mr. Cotton through the program. He said Mr. Cotton has great character, a great personality and a great work ethic. The corporate work-study program is the “key differentiator” at Verbum Dei because it exposes students to different career opportunities, Mr. Viola said.

After high school, Mr. Cotton enrolled in California State University, Bakersfield and began studying finance. When it came time for an internship, Crescent Capital welcomed him back. He learned different dimensions of financing at the company and, eventually, was offered a full-time position to begin after he graduates this summer.

“So I stayed down for the come up, if that makes sense,” Mr. Cotton said, meaning he saw the challenge through for the payoff. “Not everybody [in South L.A.] has to go through sports [to achieve success]. And I’m kind of like a walking testimony of that.”

Tuition at Verbum Dei is $2,700, though families typically pay around $1,000 after financial aid. The school receives most of its funding from donations and the paid internships. Currently, there are 319 students enrolled at the school, and this year’s graduating class will be the largest in 17 years. The school, founded in 1962 by the Society of the Divine Word, implemented the Cristo Rey model in 2002 after the Jesuits took on administrative duties.

“We’re not just a Jesuit high school plopped in the middle of Watts.”

“We’re not just a Jesuit high school plopped in the middle of Watts,” said Steve Privett, S.J., president of the school. “We’re a different operation because we serve a different population.”

Where some see the area only as an impoverished neighborhood, Father Privett said the community is rich in “potential, vitality and resilience.” Jesse Jovel, vice president of Verbum Dei’s corporate work-study program, is an example of that.

“[Verbum Dei] accepted me on a probationary basis because my transcript was so out of control,” he said, noting that he had been previously expelled from public school. “This was my parents’ last attempt at correcting the path that I was on.”

Mr. Jovel had to repeat the 10th grade at Verbum Dei. If he failed, his parents planned for him to start working for his father’s truck company.

After graduating, Mr. Jovel went on to major in English at Loyola Marymount University. He also spent a year teaching in Colombia as a Fulbright Scholar.

“Being from working-class families means that students’ parents may be stretched really, really thin, in different ways. Stretched financially. But most importantly, stretched with time,” he said. “And what that means is there are more gaps and you can fall through the cracks. And because of where we all come from, there’s more temptation to go in different directions.”

Building on the Community’s Strength

Most of the students live in gang territory, he said, though he believes drugs present a greater temptation. “You don’t have to be a gang member to feel the impacts of gang culture, of poverty, of not having,” Mr. Jovel said.

Yet in the work-study program, he makes it a point to build on the experiences of the students, their families and the surrounding community. The education and the corporate internships add to the gifts the students already have when they come to the school, he said.

Dr. Brandi Odom Lucas, the school’s principal, compared the mission of Verbum Dei to Freedom Schools, which sought to remedy the poor educational opportunities offered to African Americans in the 1960s, mostly in the South.

“Our mission is really to get those students who cannot afford a traditional Catholic education,” she said. “This is something we need to do because the kids deserve it. With the rising costs of housing in Los Angeles, the rising costs of gas, the impact of the pandemic, what we know is that there is enough need to go around. But our program doesn’t change.”

Dr. Odom Lucas grew up in the area and attended Junipero Serra High School in Gardena, a sports rival to Verbum Dei. She described the Latino and African American neighborhoods as tight-knit communities that look out for each other.

Jesuit School Spotlight is a monthly feature focusing on Jesuit middle and secondary schools from around the country. It is underwritten in part by Jesuit high schools of the USA East Province of the Society of Jesus.