Words can’t prove the resurrection. But for Mary Magdalene, Jesus’ voice reveals the truth of Easter. 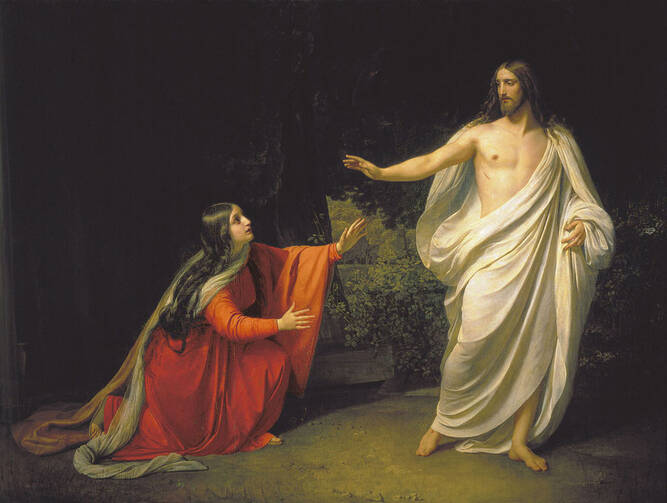 A Reflection for the Mass of Easter Day

I love the sound of his voice, and hearing it only rarely makes me love it all the more. Ray is an older parishioner in my third parish, where I do not celebrate Sunday Mass. Have you ever heard of those medieval situations where the pastor was absent and only took the revenue from the parish? This is the opposite. I pay the bills and repair things. I would rather say Mass.

It is an unforgettable voice, deep and resonant. In Ray’s parish, several men climb into the choir loft to sing each Sunday. It is a joy to hear their voices. Ray’s is the loudest, even when he is only reciting his prayers. It is like having Moses in your midst. It is not the stentorian tone alone. It is the faith and conviction in his voice.

Ray is on the parish council. That, I do attend. Everyone stops talking if he decides to speak. It is like being silenced by thunder. Although at the end of meetings, Ray often shares a joke, of a kind too corny to be recalled.

“Have you strengthened him a little to allow him to disappear forever. Will you change his face and let him go to waste?” (Job 14:20)

In pondering the resurrection, St. Thomas Aquinas said something about the human face, something equally applicable to Ray’s voice. He was commenting on this passage from the Book of Job.

Have you strengthened him a little
to allow him to disappear forever.
Will you change his face
and let him go to waste? (14:20, translated from the Vulgate)

St. Thomas followed Aristotle in using the term “face” only in speaking of humans. Both felt that the face expresses the particularity of each person, distinguishes one individual from another in a way the visage of an animal does not. Cull one animal from livestock and you would be hard pressed to identify which one.

One might say we see the soul in the face of another, and St. Thomas judged the soul, expressed in face and voice, to be too particular, too creative to be destined only to perish.

One might say we see the soul in the face of another, and St. Thomas judged the soul, expressed in face and voice, to be too particular, too creative to be destined only to perish.

St. Thomas considered the resurrection of Christ, and our own, to be articles of faith. He was not suggesting that the resurrection could be proven. He was saying that it makes no sense for God to create such a particular thing of strength and beauty, a human being, only to let it end in death. Commenting on Job, Thomas wrote:

The tool Thomas had in mind is just that, the human mind. We perceive it in the face and in the voice of another. It is too inquisitive, too probing to perish. Plop St. Thomas into my parish, and he would insist that Ray’s voice—like his face, so uniquely human and his—is too precious, too particular to disappear forever.

After my mother died, my nephew saved a recording of her voice, found in a telephone message. I listened to it, but I had no desire to preserve it. It was entirely too precious to me. We never know how sacrosanct a voice is until we can no longer hear the sound. Preserving her voice digitally seemed akin to not burying her body. I know I will hear her voice again, just as I will hear Ray’s. Copies of the two seem tawdry to me.

In so many of our resurrection accounts it is the voice, not the face, that reveals the presence of the living, resurrected Christ.

In so many of our resurrection accounts it is the voice, not the face, that reveals the presence of the living, resurrected Christ. The evangelists seem to suggest that the face has been too transfigured, too glorified by the resurrection to be immediately discernible. Not so the voice. He has only to say her name and Mary recognizes her Lord. She hears and knows that the hope of the human heart is not in vain.

The prayers that the church proposes for the dying begin with a reading from the Book of Job. I have read it so many times at the side of the bed, or even into the ear, of the one dying.

Oh, would that my words were written down!
Would that they were inscribed in a record:
That with an iron chisel and with lead
they were cut in the rock forever!
But as for me, I know that my Vindicator lives,
and that he will at last stand forth upon the dust;
Whom I myself shall see:
my own eyes, not another’s, shall behold him.
And from my flesh I shall see God;
my inmost being is consumed with longing (19:23-27).

Words alone do not prove the resurrection. Yet even hearing my own voice recite Job to a fellow, dying Christian, I know the truth of what I say.

The particularity of the soul is expressed in the sound of the voice, in the look of the face. These were not created to go down into darkness. When I next hear Ray pray or sing, I will again be strengthened by the sound of his voice. And Easter tells me there will never be a last time that I hear it.