Feel like you’ve failed this Lent? Maybe that’s the point. 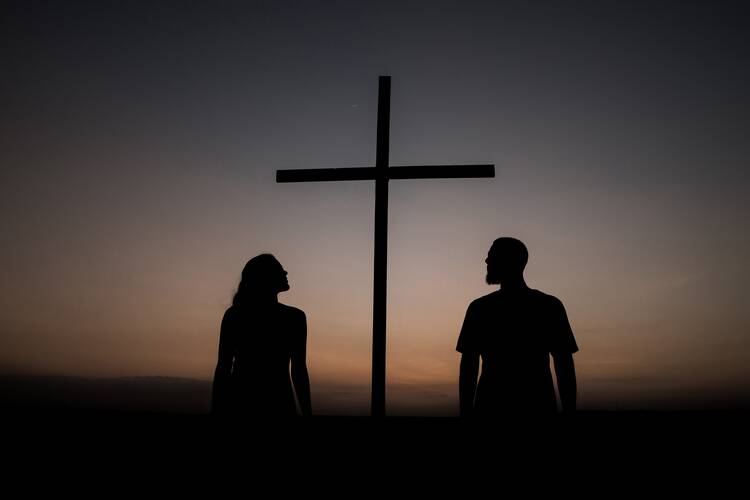 Photo from Junior Reis on Unsplash

Over the weekend, the Twitter account known as “Jesus Christ” (a.k.a. @JesusofNaz316) posted this simple request: “Use a gif to show how your Lent is going.”

What followed has been mostly a series of visual catastrophes: a large stuffed bunny rabbit collapsing while sliding down a playground slide; a very happy looking child saying “I’m fine” to an interviewer, before slowly descending into weeping; a withered being that looks as though every ounce of life has been sucked from it, waiting to die; a child swinging upside over a muddy pool, his head dragging back and forth through it as he goes; a car going off a cliff; a woman weeping.

Just for contrast, one poster had Bilbo Baggins running out of Hobbiton saying, “I’m going on an adventure!” (Oh Bilbo honey, you certainly are.)

Ah, Lent, that season in which we are asked to make some kind of small commitment to do better, just a tiny thing, like a practice version of a New Year’s Resolution. And yet by the time we get to the end of the season, it can feel like just another item to add to our list of reasons why we needed Lent in the first place.

Lent is not a home renovation show. The primary goal of the season is not self-improvement; we are not here to fix up our own personal backsplash.

I wish I could say I had some advice on how to do it better. After trumpeting how I wanted to try to be more generous this Lent, I can’t really say that I have done much in that regard or have even remembered that is my goal most of the time. I know Ignatius wrote about the value of having the desire for the desire to do something good, but did he ever extol the virtues of having the desire to just remember the desire?

But I also wonder if a certain sense of failure during Lent is actually a good thing. In part, it reminds us that Lent is not a home renovation show. The primary goal of the season is not self-improvement; we are not here to fix up our own personal backsplash. We are trying to open ourselves to a deeper relationship with our friend and savior, Jesus. Our inability to forgo chocolate or be nicer for six weeks might very well frustrate us (and sometimes others as well). But in Lent, we are not doing those things for their own sake but out of a hope that they will help us to be less walled off from God and others.

Oftentimes, I find it is the experience of failure itself that enables us to become more vulnerable. In failure, we recognize a fundamental truth: No matter how talented we are, no matter our intentions, background or effort, we are never going to get it all right. We will always need God’s help and the help of others. Maybe that makes us feel sad in a given moment, but it is actually good news because there is a God out there waiting for us to let him help. We are sinners, yes, but loved by God.

In failure, we recognize a fundamental truth: No matter how talented we are, no matter our intentions, background or effort, we are never going to get it all right.

Over the weekend I got to see my friend Jennifer sing in the West Village. At one point, she climbed up on the piano and just destroyed the room singing “Turn Back, O Man,” from Stephen Schwartz and John-Michael Tebelak’s Jesus musical, “Godspell.”

The song, which is all about confronting one’s sinfulness and changing your ways, is obviously highly Lenten in theme. The lyrics are drawn from a poem written in the wake of World War I by the English poet Clifford Bax. “Turn back, O man, forswear thy foolish ways./ Old now is earth, and none may count her days,” the poet writes, the costs of the war hanging over every word. “Would they but wake from out their haunted sleep,” he imagines later, “Earth shall be fair, and people glad and wise.”

But Schwartz unexpectedly places Bax’s lines into a big bluesy number sung by one of Jesus’ followers as she and her friends dance around an abandoned mansion, acting like they’re wealthy. Instead of solemn, it is an enormously fun song to perform, by turns playful and sexy, and absolutely infectious. Our crowd leapt at the chance to join in for the scatty “da da da da da” vocalizations that interrupt the song from time to time.

It sounds like such a contradiction with the spirit of Lent to imagine one’s failures as a reason for laughter or wonder. And yet I wonder if Schwartz is onto something. If we believe that God really is out there, waiting not to condemn us but to pick us up and dust us off, to help us and to be our friend, maybe relief and joy are the most fitting responses of all.