In this time of Lenten sacrifice, don’t forget God’s promise of abundance 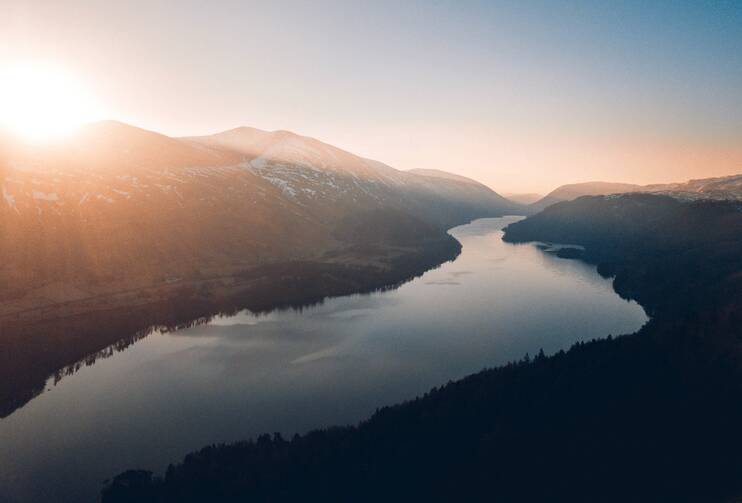 Photo by Jack Anstey on Unsplash

A Reflection for the Tuesday of the Fourth Week of Lent

“Once more he measured off a thousand,
but there was now a river through which I could not wade;
for the water had risen so high it had become a river
that could not be crossed except by swimming” (Ez 47:5).

When it comes to preaching, the Old Testament often gets the short straw. Admittedly, Yahweh can get pretty smite-y. But at other times, the text is just really boring. Like today in Ezekiel, what are we even talking about? Why is an angel asking Ezekiel to wade into a river while he measures 1000s of cubits of water, and why are we being asked to hear about it?

But at times like this, I often think of my Old Testament professor, Richard Clifford, S.J. When you come upon a passage that’s boring, he would often tell us with a knowing grin on his face, look closer. It is probably really important.

Like the genealogy of Jesus—that endless list of names of Jesus’ male ancestors that we hear during Advent: Man is that boring. But dig in and there are all kinds of little details that are really interesting, like the fact that it also includes a number of women and that the backstories of some of those mentioned don’t exactly fit the King of Kings. Rahab was a Canaanite prostitute; Ruth was a Moabite—a community not allowed in the Jewish temple; Solomon’s mother Bathsheba—who is mentioned only as “the wife of Uriah”—became David’s spouse only because he had her husband killed. So at the foundations of who Jesus is lie not some flashy line of saints and prophets but outsiders, victims and sinners. It is another way of making it clear that Jesus is one of us.

In the passage from Ezekiel, there may be some such significance to the measurement of a thousand cubits. Fun fact: A cubit is the length from your elbow to the tip of your middle finger, so about 18 inches. The term appears to actuallyderive from the Latin word for “elbow.” I like to imagine that someone somewhere was seeing how everyone had their own way of measuring things and thought, Here’s an idea: Let’s use our arms.

But I think the real power is in the repetition itself. On the page, it might not seem like it, but there’s real drama to Ezekiel wading out 1,000 cubits (i.e., just over the length of four football fields) after 1,000 cubits and seeing the water flowing out from the temple getting a little deeper, a little deeper. Where is this going? Then suddenly he finds himself in water so deep it has become a full-blown river, with trees already blooming on the banks on either side.

For me, this is a powerful image of who God is and what he promises: life in abundance so great that eventually it’s beyond anything we could ever contain. And it can come upon us so fast and unexpectedly that we’re drenched in it before we even know what happened.

In Lent, the language and imagery suggested to us is often about diminishment or loss. But Jesus’ journey does not end in death but resurrection, an abundance so absurd we can’t believe it until we see it for ourselves.

There’s great value in purifying ourselves in this season, getting ourselves ready to walk with Jesus to the cross. But sometimes I wonder if the real invitation in Lent is to wade in and see where God’s ever-growing abundance might lead us. Maybe instead of being called to sackcloth and ashes, we’ll discover we’re called these days to be like the kid who opens the fire hydrant for others on a hot summer day, or like Bill Murray, bringing random moments of joy to the strangers he meets.

Honestly, I don’t really like the idea of giving up things for Lent. For me it seems too self-focused. (Also I’m very capable of not eating chocolate chip cookies for Lent and still being a real jerk.) I want to try and be more generous and open with others.

Does the pope drink mate?

Cream together the butter, white sugar and brown sugar until smooth. Beat in the eggs one at a time, then stir in the vanilla. Dissolve baking soda in hot water. Add to batter along with salt. Stir in flour, chocolate chips and nuts. Drop by large spoonfuls onto ungreased pans.

Bake for about 10 minutes in the preheated oven, or until edges are nicely browned.

Eat slowly. Be nice to people.

I love this poem by the Australian Jesuit Peter Steele. For me it’s very much about the promise of Easter within the season of Lent.

If you watch as you have not watched before
you will see the morning
begin to lace the darkness
If you turn from the trail that has drawn you for ages
and gaze at the fringes
you will see the timber budding.
If you lean from the place of your balance,
your arms uplifted
a rhythm will catch and lift you.
For the Lord has come to his people, and the earth
trembles with joy,
the Father is kindling his fire on the earth,
the Son is roving with life in his touch,
the Spirit is rising though we are falling
And the promise come true that brought us to birth
the promise that lingered in the young and feeble
the promise that drove us from evening to morning
And the lame shall move with the gait of kings
the broken flourish, the bound step forth
and God exult among his children
So name him, and find your name in his.
Seek in the needy the light of his face
lift up your hearts, today and forever.