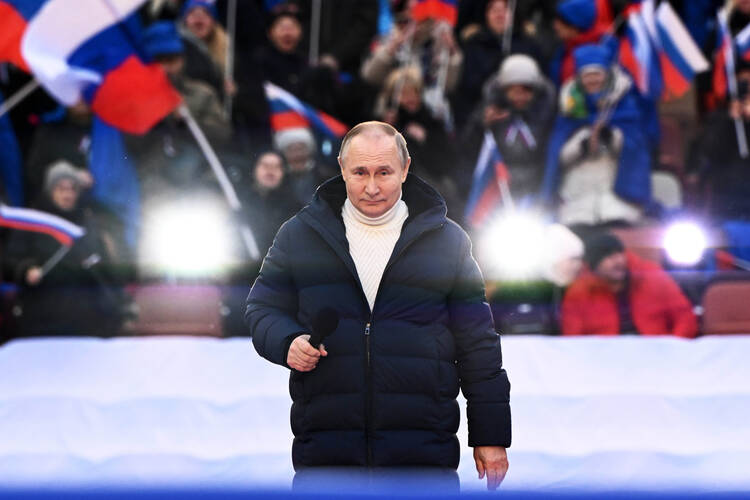 Russian President Vladimir Putin delivers his speech at a concert marking the eighth anniversary of the referendum on the state status of Crimea and Sevastopol and its reunification with Russia, in Moscow, Russia, Friday, March 18, 2022. (Sergei Guneyev/Sputnik Pool Photo via AP)

As the world watches the crisis in Ukraine unfold like the legend of the Persian king Xerxes terrorizing the “300 Spartans” at the Battle of Thermopylae, an entirely different conflict is being waged on another plane. The discernable battle may be engaged in Ukraine as a modern-day Thermopylae where the Greeks—read Ukrainians—are massacred by a superior military machine. The real contention, however, is “not against flesh and blood; it is against principalities and powers, against the world rulers of this present darkness, against the spiritual hosts of wickedness in the heavenly places” (Ep 6.12).

Western critics have predictably observed that the war in Ukraine is not merely geopolitical but religious. They realize something strange is going on—if for no other reason than because, while Russians and Ukrainians speak a different language, most of their clergy wear similar exotic vestments. For their part, Russian authorities argue that the war they wage is not about territorial conquest but about remembering and reinforcing the unity that binds them with Ukraine—a unity going back to at least the 10th century, when Vladimir the Great, grand prince of Kiev (considered the birthplace of Russian Orthodoxy), was baptized in 988, prompting the Christianization of Holy Rus’ (which included the territories of modern-day Belarus, Ukraine and Russia).

Dismissing the war on Ukraine as religious, or diminishing it as ecclesiastical, is at best an uncritical perception of what we are witnessing on our television screens and on Twitter.

That unity, Russian leaders claim, is now imperiled by the West. As a result, they reiterate the outlandish mantra that Orthodox Christians—specifically Russian Orthodox—are the victims in this ordeal.

Nevertheless, dismissing the war on Ukraine as religious, or diminishing it as ecclesiastical, is at best an uncritical perception of what we are witnessing on our television screens and on Twitter. Russia’s belligerence and indifference to eradicating innocent civilians and children, while in the process forcing millions of refugees to flee to bordering nations, can only be explained as blind adherence to an ideology to which Russian leaders zealously offer bloody sacrifice.

Americans, of course, are not oblivious to such militant ideologies. International scholar John Mearsheimer has long decried the forced creation of liberal democracies in the Middle East and elsewhere in the interest of U.S. foreign policy. All of us recall the mandate and pledge in the Sermon on the Mount, inspiring us, as “a city on a hill…not to place the lamp under a bushel, but to set it on a stand, from where it can shine on the whole world” (Mt 5.14–15). Everyone quotes Scripture—conservatives and liberals alike, indeed Putin himself at a rally in Moscow on March 18—but not everyone agrees on its interpretation when they reach a crossroads that separates aggressors from victims. In the past, America rationalized its occupation of sovereign lands for the sake of oil. Today, Russia legitimizes its invasion of Ukraine for the sake of Ukraine’s soul.

As a realist, Dr. Mearsheimer is unequivocally aware of the geopolitical nuances behind President Putin’s unholy war. Perhaps, however, he is naively indifferent to the ideological rhetoric of Patriarch Kirill, the current head of the Russian Orthodox Church. For President Putin and Patriarch Kirill, the invasion of Ukraine is not just an exercise in historical or emotional reflection; nor is it an enterprise of intellectual or philosophical position. It goes far deeper than that.

The problem is not so much the less-than-holy alliance between Mr. Putin and Patriarch Kirill, which has ignored the concerted global plea for war to cease and peace to prevail in Ukraine. The trouble is that the twin tyrants of the post-Bolshevik state and post-Czarist church have been dogmatically and doggedly tone-deaf in recent decades to the free world’s developments, which they consider and condemn as shades of evil in a fallen world. There is indeed religious symbolism behind the territorial invasion of Ukraine by Russia, but it reflects the much larger metaphysical fantasy of the spiritual salvation of the whole world.

Nationalism isn’t always—or doesn’t have to be—a bane; it can actually be a blessing for local Orthodox churches.

To decry or describe Russia’s invasion of Ukraine as fratricide is to miscalculate and misinterpret the war as perceived through the lens of both Mr. Putin and Patriarch Kirill. Their words and actions are not solely about brazen expansionism or nostalgic imperialism on the basis of some primitive nationalism. The stakes are much higher. And what reveals the underlying ambitions of the heads of church and state in Russia is a consideration of the details on the margin of history as it is being recorded.

I would submit that focusing on the underlings of Mr. Putin and Patriarch Kirill—on Minister of Foreign Affairs Sergey Lavrov in the case of the first, and Chairman of External Relations Metropolitan Hilarion in that of the second—provides a fresh, albeit frightening outlook.

On the one hand, like Mr. Putin, Mr. Lavrov has denounced any intervention in another state’s sovereign matters—by which of course he denotes the interference of the United States in the independence of Ukraine. On the other hand, he has gone so far as to impugn the newly independent Ukrainian Orthodox Church (separate from the Russian Orthodox Church since 2018) as an instrument of American foreign policy.

Like Patriarch Kirill, Metropolitan Hilarion has remained conspicuously silent on the war, issuing inconsequential statements on peace—comparable to some autocephalous Orthodox churches that have been afraid to denounce Mr. Putin in fear of alienating the powerful Russian Orthodox Church. However, it is not what Patriarch Kirill and Metropolitan Hilarion say that matters as much as what they actually do. And it is not so much what they do close to their homeland that matters but what they are doing in other parts of the globe.

In this regard, it is telling that Metropolitan Hilarion traveled to the ancient Patriarchate of Jerusalem in late February, only days before the Russian invasion of Ukraine, drumming up support against the leadership of Ecumenical Patriarch Bartholomew and distributing funds for the protection of Christians in the Middle East—a gesture with political baggage harking back to the mid-19th century with the creation of the Imperial Palestinian Society. He paid a similar visit on March 5 to the ancient Patriarchate of Antioch, bearing similar gifts in the name of protecting the Christians of Syria, whose President Bashar al-Assad has coincidentally ruled as interminably and imperiously as Mr. Putin, with unqualified support from both the Russian president and patriarch.

Promoting a religious ideology like Russkiy Mir is not a refining or an improvement of Russian Orthodoxy as much as it is a declaration of a “culture war.”

Such initiatives are by no means a geopolitical collateral of nationalism. They are a consequence of the doctrine known as “Russian World” (Russkiy Mir), whose platform is an ideological worldview that rejects most forms of diversity and tolerance from any long-standing Russian Orthodox positions. Just days ago, an international group of scholars rejected this doctrine as foreign to Orthodox tradition and teaching.

Nationalism isn’t always—or doesn’t have to be—a bane; it can actually be a blessing for local Orthodox churches. National identity can ultimately work through its messiness, precisely because it is closely associated with a tangible devout and devoted community. This is why—while condemning the heresy of ethnophyletism, the conflation between church and nation—in 1872, the Ecumenical Patriarchate sanctioned the creation of independent national churches, establishing autocephalous and autonomous churches in Georgia, Russia, Serbia, Romania, Bulgaria and Greece (during the 19th century), and implementing the same principle in Poland, Albania, the Czech Republic and Slovakia, Albania, Finland and Estonia (during the 20th century). In fact, every Orthodox church—with the exception of the ancient churches of Alexandria, Antioch, Jerusalem and Cyprus—has been founded by the Ecumenical Patriarchate—including Russia.

Nationalism can be refined or reproved, but promoting a religious ideology like Russkiy Mir is not a refining or an improvement of Russian Orthodoxy as much as it is a declaration of a “culture war.” Such an ideology does not simply invade borders; it unravels order. It does not merely undermine sovereignty; it erodes liberty. The enemy of such an ideology is freedom—freedom of speech, freedom of press, and freedom of religion.

And yet Russkiy Mir is the ideology to which President Putin and Patriarch Kirill subscribe. Which is why, upon annexing Crimea in 2014, Mr. Putin erected a statue to Vladimir the Great—the 10th-century baptizer and ruler of the Rus’—beside the walls of the Kremlin. It is also why Patriarch Kirill wears a white headdress or cowl, evoking the presence of pontifical power.

What President Volodymyr Zelensky says about Ukraine’s defense of democracy is true, though he is probably unaware of the ideological clash involved. This is a winner-take-all battle. If Russia prevails in Ukraine in the long term, it is likely to shape the future of the global Orthodox Church, if not the international political order. The war is not about Russia capturing Ukraine; it is about Russia challenging the Western world, which Mr. Putin and Patriarch Kirill both regard as evil.

Russia has declared war against the world order and for a new morality. Russia is competing for what it considers the soul of the world, for a cultural unity that—again in their distorted image of the world and interpretation of the Gospel—brings Russia and Ukraine together in a brave new Russian world. This worldview presumes a Russian hegemony, no matter how fictitious that appears to the rest of the world. 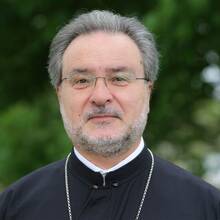