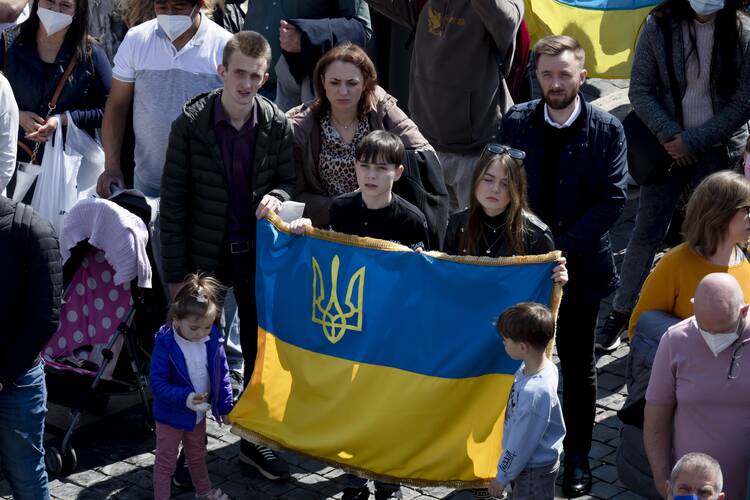 Young people hold a Ukrainian flag as Pope Francis speaks to visitors gathered in St. Peter's Square at the Vatican for the recitation of the Angelus prayer March 20. (CNS photo/Vatican Media)

Pope Francis has again denounced Russia’s “violent aggression against Ukraine” as “a senseless massacre” for which “there is no justification.” He implored “all the international actors” to “truly commit themselves to bring an end to this repugnant war.”

Speaking with passion but without naming Russia, he told thousands of pilgrims from many countries gathered in St. Peter’s Square on Sunday, March 20, that “Sadly the violent aggression against Ukraine does not slow down.” He denounced it as “a senseless massacre where every day is repeated atrocities” and said, “There is no justification for this!”

In this context, he recalled that in this past week “missiles and bombs have fallen on civilians, elderly people, children and pregnant mothers” across Ukraine.

“I invite every community and every one of the faithful to join with me next Friday, March 25, the solemnity of the Annunciation, in making this solemn act of consecration of humanity.”

He told the crowd in St. Peter’s and a vastly greater global audience: “Yesterday I went to visit the injured children who are here in Rome; one lacked an arm, another was injured to the head. Innocent children!” He was referring to a visit he made to the Vatican owned Bambino Gesú, pediatric hospital in Rome, where 19 children from Ukraine are currently being treated, some with pathologies such as cancer, others with injuries from the bomb blasts. A total of 50 Ukrainian children have been treated by doctors in this hospital, and its secondary branch, over the past three weeks.

Francis told the crowd: “I am thinking of the millions of Ukrainian refugees who had to flee [their homes] leaving everything behind.” He was referring to the fact that already 3.5 million Ukrainians have become refugees and fled to other countries, while 6.5 million have been internally displaced in the country during the war that is in its fourth week. Ukraine, the second largest country in Europe after Russia, has a total population of 40 million people, but today a quarter of its population have been forced to leave their homes.

“I feel great pain for those who don’t even have the possibility to escape,” Francis added. “Many grandparents, sick and poor, separated from their own family members, many children and fragile persons remain to die under the bombs without being able to get aid and without being able to find safety, not even in the air-raid shelters.”

Pope Francis again denounced Russia’s “violent aggression against Ukraine” as “a senseless massacre” for which “there is no justification.”

“All this is inhuman,” Francis said. “Indeed, it is even sacrilegious, because it goes against the sacredness of human life, above all against defenseless human life, which is to be respected and protected, not eliminated and which comes before whatever strategy. Let us not forget, this is cruelty, inhuman and sacrilegious.”

At that point he invited everyone present to pray with him. “Let us pray in silence for those who suffer!”

After a period of silence, he told the crowd: “There’s not lacking the closeness of the pastors. In these tragic days they are living the Gospel of charity and of fraternity.” He revealed that he had spoken to some of them by phone in recent days. “I heard from some of them in these days by telephone, and how they are close to the People of God.” Addressing these Ukrainian pastors, he added: “Thank you dear brothers and sisters for this witness and for the concrete support you are giving with courage to many desperate people!” The crowd applauded.

Francis next mentioned the apostolic nuncio to Ukraine, the 47-year-old Archbishop Visvaldas Kulbokas, who was born in Lithuania. He said, “I am also thinking” of him” who was just made nuncio” in mid-2021, and “who from the beginning of the war has remained in Kyiv, together with his collaborators, and with his presence he makes me present every day to the martyred Ukrainian people.

“We are close to this martyred people. Let us embrace them with affection and with concrete commitment and with prayer, and please let us not get accustomed to war and violence!”

Aware of the vast outpouring of solidarity across Europe for the Ukrainian refugees, but also aware that this conflict might not finish soon, and the refugees may not be able to return home for a long time, Francis said: “Let us not grow tired of receiving them with generosity, not just now in the emergency but also in the weeks and months to come.” He reminded them that “as you know, in the first moments we do everything to receive them, but then habit cools the heart a little and we forget them.”

He urged them not to let their hearts grow cold: “Think of these women, and of these children.” Significantly he sought to protect these women from human traffickers, by reminding everybody that “they are without work, separated from their husbands” and “they will be sought by the vultures of this society.” He pleaded with the general public: “Let us protect them, please!”

Pope Francis concluded his emotion-packed appeal by inviting people to join him in prayer next Friday. “I invite every community and every one of the faithful to join with me next Friday, March 25, the solemnity of the Annunciation, in making this solemn act of consecration of humanity, and especially of Russia and Ukraine to the Immaculate Heart of Mary, so that she, the Queen of Peace, may obtain peace for the world.”