What would Jesus say about cancel culture? 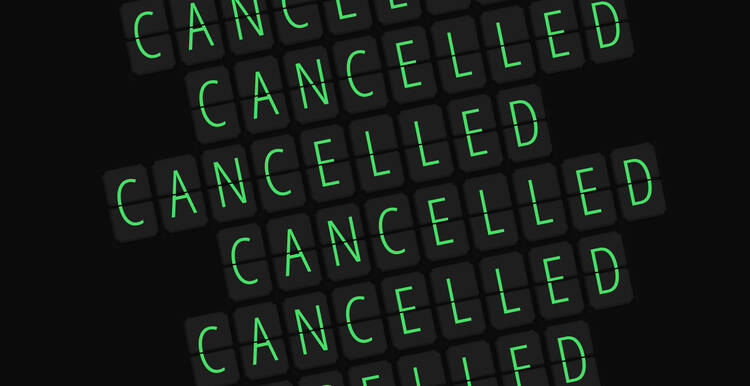 Whom would Jesus cancel? The answer to that is easy: everyone I dislike, including headline editors who don’t know the difference between “who” and “whom.” I suspect most of us secretly feel the same much of the time. But in a world where “cancel culture” is a reality—if not quite the menace some would have us believe—the question of who or what deserves cancellation is a weighty one.

Is cancel culture a necessary tool for cultural revitalization and the righting of historical wrongs? Or is it simply the tool that a secular society uses to create its scapegoats when religious strictures and cultural taboos have no public force? When is it a boon to the common good to destroy someone’s reputation or livelihood, and when is it just screaming “witch” at a show trial?

Even a cursory look at Scripture shows that Jesus was not at all afraid to repudiate those who deserved it.

I am sure there are many people—left and right, secular and religious—who deserve cancellation by our modern lights. There are also many people who I wish would shut the hell up. There might be a difference. What would Jesus do?

It is important to note that some of the pearl-clutching about cancel culture is performative, carried out by people who were legitimately exposed for unacceptable and sometimes criminal behavior. For example, the disgraced former New York governor, Andrew Cuomo, is back in the news, now blaming cancel culture for his resignation. This claim conveniently ignores the fact that Mr. Cuomo’s own attorney general found he had broken both state and federal laws by sexually harassing at least a dozen female employees. That’s not cancel culture, pal; that’s getting caught.

On the other hand, we have all witnessed occasions when bad actors—on either the political left or right—have tried to cancel others out of what seems nothing more than malice or craven opportunism. A few years ago, I worked on a book on the correspondence between Daniel Berrigan, S.J., and his brother Philip. When the book was released, a theologian at a Catholic university took to social media to complain that the two editors of the book had ignored Phil Berrigan’s racism.

The only times Jesus tells someone to shut up, to get lost, it’s Satan or it’s his pal Peter—get thee away from me.

One of the editors pointed out that no one ever thought Phil Berrigan was a racist—and that Berrigan had been a member of a religious order, the Josephites, that had a specific charism to serve Black Catholics. It made no difference. No evidence was ever presented to prove the charge; rather than retracting it, the professor accused the editor of rhetorically attacking her. She was just determined to make Phil Berrigan persona non grata in the world of academia for her own reasons. That, my friends, is cancel culture, if a clumsy manifestation of it.

American history is, sadly, full of examples where an unjust cancellation worked, because the cancellers caught the zeitgeist just right. From the Salem witch trials of the 1690s through the execution of Sacco and Vanzetti in 1927, from the Japanese-American internment camps of the Second World War to the McCarthy anticommunist crusades of the early 1950s to the Hollywood blacklists of the same decade, we have a long and sordid history of deciding who’s not getting with the program—and aggressively trying to drive them out into the desert. Usually we applaud. Sometimes we apologize later. Whoops.

What would Jesus think of all this? He certainly was not opposed to cancel culture on one level. Even a cursory look at Scripture shows that Jesus was not at all afraid to repudiate those who deserved it: hypocrites, those who used the rules to declare others unclean, those who profited from religion, those who bound up burdens on people, those who declared themselves the holy ones.

Any culture where the urge to silence one’s opponents is the first impulse has a whiff of corruption to it.

Note, however, that Jesus does not say to these people, “I don’t want to listen to you.” He tells them they’re wrong. There’s a difference there, one to which we should pay attention. The only times Jesus tells someone to shut up, to get lost, it’s Satan or it’s his pal Peter—get thee away from me. Everyone else is free to argue with Jesus. He might tell them they’re dogs or vipers or whitened sepulchres full of the bones of the dead, but he prefers prophesying against them to demanding their silence.

Any culture where the urge to silence one’s opponents is the first impulse—instead of debating or contradicting them—has a whiff of corruption to it. It suggests that the opinions or suppositions of the ones doing the canceling cannot withstand any opposition. Can’t a healthy culture stand against critique, against a lack of wokeness or a wrong opinion? What is the legitimacy of any system that relies on blocking its antagonists, disappearing its enemies, silencing dissent?

Catholics with an eye to history know what happens to systems like that. They can become sclerotic, defensive, a militant in-group that can look very much unlike anything Jesus wanted. They end up as institutions that want to ban books, burn heretics, silence scholars, use decrees of anathema to respond to contrary views.

The answer—in some ways, the healing mechanism—for such cultures is external review. The outside auditor, the admonitor, the red team, the devil’s advocate. It is oftentimes much more valuable to listen to the outsider with the Very Bad Opinion than it is to find affirmation from our like-minded peers.

Because, as Jesus also knew, we never want to listen to the prophet who comes from our own hometown.