Can ‘traditional’ Catholics support Pope Francis? Our readers weigh in. 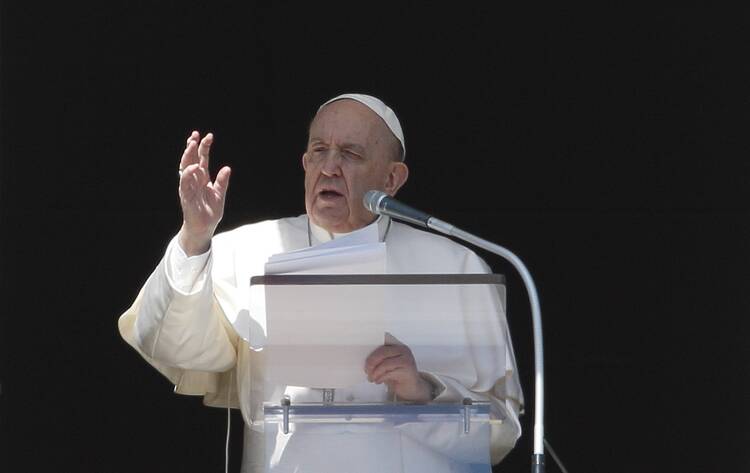 Pope Francis gives his blessing after leading the Angelus from the window of his studio overlooking St. Peter's Square at the Vatican March 13, 2022. (CNS photo/Paul Haring)

“I am the kind of Catholic who is supposed to be a Pope Francis foe,” wrote Terence Sweeney in the March 2022 issue of America—but despite this expectation, he in fact approves of the current pope. Noting that Francis defies easy categorization in the political and even theological realms, Mr. Sweeney argued that so-called traditionalist Catholics often fail to see just how “traditional” the pope’s teachings are. Many readers responded in agreement with Mr. Sweeney’s view, although others were skeptical that it is widely shared by proponents of “traditional” Catholicism.

I am what I would consider to be a “middle of the road” Catholic, something I consider Pope Francis to be also. Perhaps that is why I am comfortable with having him as a pope and the manner in which he does what he does. Now, I’m not so sure about other parts of the world, but it seems that here in the United States, one has to be an “either or” person; there is no middle ground on much of anything anymore. I believe that is why so many exhibit frustration with Pope Francis: “If he is not with me (and my views) he must be against me.” This comes from both ends of our social spectrum. Societally, it appears that much of the United States has become an embittered group of people ready to destroy whatever they disagree with. Perhaps we need to listen more to Pope Francis, not just as Catholics, but as citizens of the United States.
Stephen Healy

Great point! One of the root causes of this division is the politicization of everything. Party politics by its very nature is divisive. If that is the only level at which we function, there will always be an “either or” situation. But our Catholic faith, as has been pointed out many times, is a “both and” faith. Unless we reach that level of reality, we will continue in this seemingly perennial battle between opposing sides.
Elena Garcia

I made the felt banners in the 1960s and 70s. I was glad to know then, and now, that the efforts of young people to contribute to the liturgy—sometimes primitive, sometimes clumsy, but always crafted with love—are as worthy a contribution to the celebration of the Mass as the gleaming gold and stained glass religious artifacts.
Anne Kiefer

While this article is comforting, many of the so-called traditional Catholics would utterly reject its conclusions. They are “radical traditionalists” who want to turn back the clock, not just on the Roman Catholic Church, but on modernity itself.
Rosemari Zagarri

No one is asking the church to “get with the times” in the sense of conforming to them. Rather, we must behave in the same sense that Christ “got with the times” during his life. Christ broke numerous cultural and religious standards vis-à-vis encounters with nonbelievers, with women, with tax collectors, with lepers. He broke established Jewish Sabbath regulations. Traditionalists would have us return to a mind-set and approach that contradicts what Christ did.
Vincent Gaglione

The people of Nazareth wanted to kill Jesus for preaching the truth. In today’s church, so many American bishops, priests and lay people are trying to do the same, especially to Pope Francis, for exactly the same reason. The Gospel always proves relevant to our day and time.
Peter Devine

Our brothers and sisters in Christ that you reference are not like a bunch of sanguinary Nazarenes bent on killing our Lord, and to impute such things to them is just an exercise in unhelpful hyperbole. Perhaps we can talk about how traditionalist Catholics might have been well intended—but the current reality, judging from the dozens of comments here, is that we appear to be a divided flock.
J. Griffin