Inside Cardinal Czerny’s visit to Ukraine 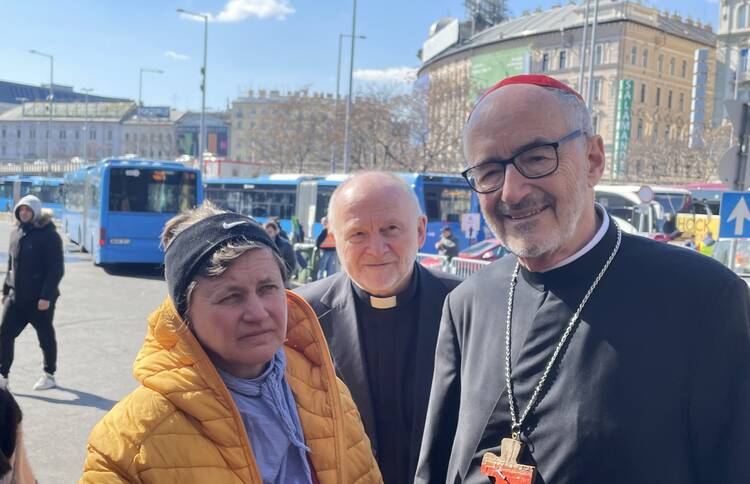 As Russian President Vladimir Putin’s war against Ukraine began taking a terrible toll, forcing millions to leave their homes and seek refuge in other European countries, Pope Francis announced on March 6 that he was sending two cardinals—Konrad Krajewski, his papal almoner, and Michael Czerny, under secretary of the Migrants and Refugees Section of the Vatican’s integral human development office—to convey his solidarity and that of the whole church to the suffering people of the Ukraine.

Cardinal Krajewski went to Ukraine, entering via the Polish-Ukrainian border, while the Jesuit Cardinal Czerny traveled to Hungary and briefly visited Ukraine. America spoke with Cardinal Czerny on his return to Rome about his visit.

“I knew I would meet people who were suffering and who were distressed, disoriented and uprooted, but I didn’t think I would meet the war itself. But I did in them,” he said, referring to the Ukrainians affected by the war.

“I was not close to the war as such, but I was close to the effects of the war, so my impression is not of the crisis itself but how it is lived and suffered by the people. I experienced the war from the impact on the lives of people,” he said.

Cardinal Czerny explained that he went first to Budapest, where he met Ukrainian refugees at the two main train stations in the Hungarian capital, which thousands of refugees come through each day. He met many volunteers who were helping the refugees there and in other locations he visited, including the Jesuit Refugee Service center in Budapest, which, he said, is doing “really good work” providing formation for volunteers.

[Read also: Cardinal Krajewski in Ukraine: ‘Faith can move mountains, not to mention a stupid war.’]

He also traveled to the Hungarian-Ukrainian border town of Barabás, where refugees enter Hungary and where the Hungarian government, Caritas Hungary and other charitable organizations welcome them. From there he was driven across the border to Beregove, Ukraine, to meet with the local Eastern- and Latin-rite Catholic bishops, and was “happily surprised and delighted” to see that Protestant and Jewish representatives were also working with the Catholics to assist the refugees.

Asked how people received him on his visit, and whether he had to explain why he was there, the cardinal said people understood well that the purpose of his mission was to convey the pope’s solidarity with those suffering. He said several asked him “for the pope’s blessing.” “Every time that I was welcomed, the people expressed exactly what was my mission, they knew that. It’s as if they were telling me why I was there, so when I got the first chance to speak, all I could say was ‘You understood very well, I have nothing to add.”

From his many encounters, he noted “a terrible distress” among the refugees. He said: “The people who come are not dead in a technical sense, but they have lost their lives. And they don’t have a new one yet, so they are terribly beaten, and terribly vulnerable.”

At the same time, in the face of “this excruciating vulnerability,” he said, he witnessed “the very caring presence” of the church for the refugees as they approached the Hungarian border. “They were so poor, have so little and yet they care, so that’s very impressive.” Cardinal Czerny described “the warm and generous welcome” the refugees were given, together with a “largely competent and relatively coordinated” response by Hungarian organizations, and especially Christian ones, he said.

“The people who come are not dead in a technical sense, but they have lost their lives. And they don’t have a new one yet, so they are terribly beaten, and terribly vulnerable.”

Commenting on the war in the light of his experience, Cardinal Czerny said he was struck by the fact that “warfare has become far more automated and mechanized so the violence is anonymous, or remotely controlled. There’s something diabolically mechanical or coldly technical about the war as it seems to be carried out today.” He said he was struck by the refugees’ stories of Ukrainians “running down to the bomb shelter under their buildings” during the Russian attacks.

The cardinal, who is deeply concerned about human trafficking—which often spikes in situations like this humanitarian crisis—also learned that many Ukrainians “who were accustomed to the old Soviet system have an innate distrust of anything public, of any state operation, so they won’t get into the government bus, which, of course, plays right into the hands of the traffickers. Somebody comes up and says, ‘So you don’t want to get into the bus, that’s not a problem, I’ll give you a lift.’” He said: “This is a real, cultural fact linked to trafficking. [Refugees] are trying to ensure their own security, and perversely they are falling into a trap.”

In this context, Cardinal Czerny told America that on his return to Rome he received information that traffickers were attempting to abduct Ukrainian refugees in Poland and to bring Ukrainian women into prostitution networks in Germany, the Netherlands and Denmark. He said that at the beginning of this week, there was an attempt to lure Ukrainian women onto two buses that would take them from Medyka, on the Polish border with Ukraine, to Denmark, but that some Ukrainian women already living in Poland managed to block that attempt by asking to check the identity of the would-be traffickers. The traffickers quickly disappeared, he said. Cardinal Czerny said he was informed that Ukrainian women are now organizing to prevent any such future attempts.

Another goal of the cardinal’s mission was to check on the situation of foreign students who were studying in Ukraine but had fled the country because of the war. There were an estimated 75,000 students from Africa, Asia and Latin America in Ukraine when the war broke out, and they sought to escape the conflict. Cardinal Czerny met several of them in Budapest, he said, “and they helped me to gain a deep and visual impression of the war. They have not lost their lives. That’s the difference between the Asians, the Africans, the Ecuadorians, and the Ukrainians.”

"Warfare has become far more automated and mechanized so the violence is anonymous, or remotely controlled. There’s something diabolically mechanical or coldly technical about the war as it seems to be carried out today."

“The Ukrainians,” he said, “have lost their lives, they have left behind their whole life. They came with two shopping bags, and God knows what they’ll find if and when they ever go back home. The Ecuadorians and the Africans, on the other hand, put whatever they had in a suitcase when they came out, and either their government is caring for them, or they will stay in Hungary or somewhere else in Europe to finish their studies.”

He noted that the Hungarian government has provided “very generous offers” for students from Ukraine who have become refugees, including allowing students to enroll “practically instantly” in the Hungarian equivalents of their programs. He cited the example of a medical student he had met who was in his last year of school, who told him that next Monday he will be back in class in a lecture hall, except he will have changed countries. “The look on the faces of these students from other countries are quite different from the look on the faces of the Ukrainians,” he said.

Cardinal Czerny said he was also impressed by how many people “from all over Europe” came in cars and vans to the border with Ukraine offering to take people to different countries in Europe and give them assistance, like Sister Lucía Caram, who drove six refugees 2,000 miles from Romania to Spain to live at her convent. “The idea that charity means I jump in my car and I drive for 8-10 hours and then wait at the border for somebody who might need a lift back home, I think that’s very touching,” the cardinal said. “I was so touched by this direct, simple, honest response to a great need.”

During his visit, the Russians bombed a maternity and children’s hospital in the port city of Mariupol in the southeast of Ukraine. Cardinal Czerny told America: “The real story is what I told you at the beginning: War is becoming automated, mechanical, and electronic…played out on a screen rather than in reality and, on the other hand, the category of ‘military target’ [that can be attacked according to the Geneva Convention] has become irrelevant. It is the civilian life, the civilian population, the very life of the country, that is the target.”

When asked if there will be a follow up to his visit, the cardinal said, “I don’t know because the mission came so spontaneously from the Holy Father that until I debrief with him and see whether he wants me to carry it forward or what he may want me to do.”