‘Rivers of blood and tears are flowing in Ukraine,’ Pope Francis says. The war must end now. 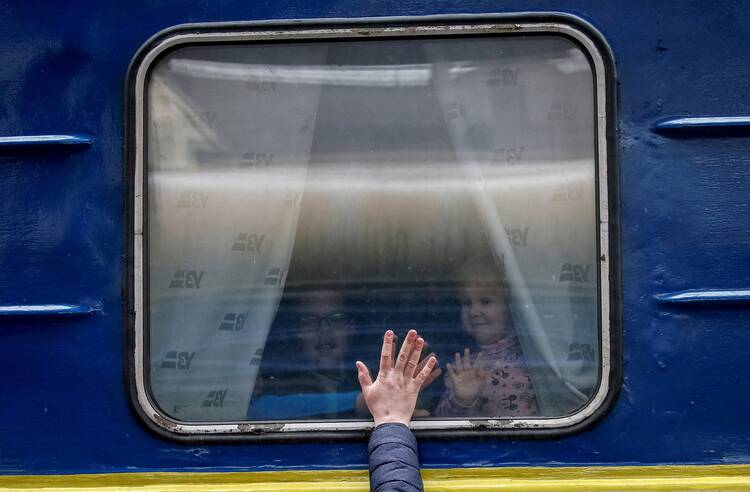 Children at the central train station in Kyiv, Ukraine, look out from an evacuation train to Lviv March 3, as they say goodbye to their father. (CNS photo/Gleb Garanich, Reuters)

“Rivers of blood and of tears are flowing in Ukraine,” Pope Francis said today as he made a passionate and robust appeal for an end to the war in Ukraine that has now entered its 11th day. He called for a stop to the armed attacks in the country, and for negotiations and good sense to prevail. He appealed for a return to the respect of international law, which has been broken by the invasion of the country by Russian forces.

“Above all else, I implore that the armed attacks stop, that negotiations prevail, and that good sense also prevails, and that there be a return to respect the international law,” he said in a heartfelt and emotion-packed appeal that drew strong applause from the thousands gathered in St. Peter’s Square this Sunday, March 6.

"I implore that the armed attacks stop, that negotiations prevail, and that good sense also prevails, and that there be a return to respect the international law.”

He appealed too for “the true securing” and guaranteeing of “humanitarian corridors” and for making available vital aid to the populations of the cities and towns under siege by the Russian forces that, as reports show, lack food, water, and electricity, and who are living in fear.

Significantly, he added that in Ukraine today “one is not dealing with a military operation only, but with war that sows death, destruction and misery.” By stating this categorically, the pope has called out the big lie being propagated by President Vladimir Putin and the Kremlin authorities who continue to insist that what is happening in the Ukraine is “a military operation” not an invasion of a sovereign state and a war. Journalists or people who state otherwise in Russia now risk heavy penalties following legislation passed in the Duma, the Russian parliament, last Friday.

“The victims are ever more numerous, as are the people in flight, especially mothers and children,” Francis stated, referring to the thousands being killed and wounded, and the more than 1.5 million people who, according to the United Nations, have already fled the war in the country and become refugees in neighboring European states.

“In that martyred country there grows hour by hour the necessity of humanitarian assistance,” the pope said. He made a “pressing appeal that humanitarian corridors be truly secured.” These corridors were agreed at the second round of talks between Russian and Ukrainian delegations and were due to take effect yesterday for the cities of Mariupol and Volnovakha but as the local Ukrainian authorities and international media reported, Russia did not initially respect the partial ceasefire. Evacuations had to be halted again today, the BBC reported, as the ceasefire was again broken.

“In that martyred country there grows hour by hour the necessity of humanitarian assistance."

Aware that the populations of these and other cities, mostly living in bomb-shelters and to a large extent lack food, water and medical supplies, Pope Francis also asked that “there be guaranteed and facilitated the access to aid for the besieged people so as to offer vital help to our brothers and sisters who are oppressed by the bombs and fear.”

Pope Francis also thanked “all those who are welcoming the refugees” from this war, in what has become the fastest growing humanitarian crisis since World War II in Europe (1939-45). Last Wednesday, he thanked especially Poland which had already welcomed almost half a million refugees, and the UN calculates it will have received more than one million refugees by this Sunday evening. Slovakia, Moldova and Romania have given refuge to hundreds of thousands in what the UN estimate could reach as much as four to five million, and perhaps more, depending on how long the war continues.

Pope Francis also expressed a special word of grateful appreciation for the journalists from many countries that have come to Ukraine and are reporting on this war.

“I would also like to thank the men and women journalists who put their own lives at risk to provide information. Thank you, brothers and sisters, for this service. A service that allows us to be close to the tragedy of this people, a service that permits us to evaluate the cruelty of the war. Thank you, brothers and sisters!” he said drawing strong applause from the crowd in St. Peter’s Square.

"War is madness! Stop, please! Look at this cruelty!”

Drawing attention to the many Ukrainian flags among the crowd in St. Peter’s Square, he invited all present to pray for the people of Ukraine and peace in that country. He began reciting the Hail Mary, and the crowd joined him in the prayer.

Pope Francis then told the crowd, and the millions following in other countries by TV, radio and social media, “The Holy See is ready to do everything it can to put itself at the service of this peace (in Ukraine).”

He himself had already visited the Russian embassy and spoken with the ambassador, who is the personal representative of President Putin, and pleaded for a ceasefire, negotiations and an end to the war. He had also spoken by phone with President Volodymyr Zelensky.

Francis also revealed that “in these days” he had sent two cardinals to the Ukraine “to serve the people, to help them.” He named the two he had sent: Cardinal Konrad Krajewski, the papal eleemosynary, “to bring aid to the most needy” and the Jesuit Cardinal Michael Czerny, interim prefect of the Dicastery for the Integral Human Development. He said, the presence of these two cardinals in Ukraine “is not only the presence of the pope but of the entire Christian people who want to be close (to the Ukrainian people) and to say, ‘War is madness! Stop, please! Look at this cruelty!’”

His words brought thunderous applause from the crowd in St. Peter’s Square. They were also broadcast worldwide by Vatican Media.

[Related: It’s time for the bishops to speak up again about the threat of nuclear war]